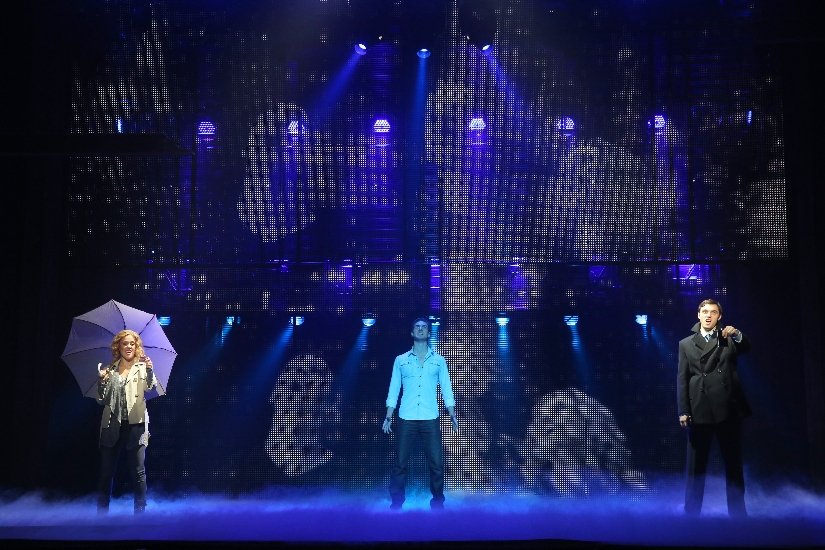 What is the key to a successful movie-to-musical transformation? Ghost (1990) was a sleeper blockbuster and is now considered a classic. The story is a bitter-sweet, cliché-ridden good vs. evil, embellished by the spirit world and ultimately crowned by the satisfying power of love. The movie starred Patrick Swayze at the height of his career, Demi Moore donning a cute pixie haircut and tearing up on demand, and Whoopie Goldberg, who won best-supporting-actress Oscar for the role. Ghost The Musical is anything but quiet or intimate, but remains true to the story.

Wall Street banker Sam, murdered in a botched mugging, is stuck on earth as a ghost to help his artist girlfriend Molly who is in danger. He has to stay back and set things in order before he can move to the next place.  He engages a psychic who can hear him to communicate with Molly about the doings of his friend, Karl. Bruce Joel Rubi wrote both the screenplay (an Oscar winner, no less) and the stage play, but he made the mistake of trying to write the bulk of the lyrics, too. Even the all-star music creative team including Dave Stewart from the Eurythmics and Grammy-winning Glen Ballard couldn’t make those lyrics memorable.

The voices of the main characters, Sam (Steven Grand Douglas, who is a UMN –Duluth grad) and Molly (Katie Postotnik) are solid, but don’t expect them to dance, they only have to move.  Also, Faux-blonde waves replace Molly’s iconic pixie cut. Unfortunately, the acting is mediocre and the ensemble dancing just ok. The ensemble make up a troupe of characters who go from suited Wall Street umbrella dancers, to street urchins, to ghostly characters. We could choc up the weakness to opening night and maybe to the less seasoned performers (many are fresh grads and on their first tour). The psychic’s sisters, played by Evette Marie White and Lydia Warr, look like twins and Oda Mae (Carla R. Stewart) were great, despite the dream-girl cliché.

What gets lost on stage is the intimacy. Big dance numbers and copious flashing lights on stage replace the slow, sweet pace found in the movie. The spinning, flashing strip of stage lights feels more like a rock concert and it rotates and blinds during almost every number. The voices shine, but the relationship never sizzles. The intense iconic pottery wheel scene taken from the movie is an afterthought, included because it had to be. Intimacy out, bright lights and dancing in.

The touring show got off to a rough start opening night–20 minutes late for technical reasons, understandable when you know how much technology was involved. If visuals could carry the show, the projected backgrounds and technical feats are what make it phenomenal. The whole show is saved by some pretty awesome technical accomplishments. The scrim that comes down at the front of the stage offers surface for a multitude of coolness. A New York fly-over, projected loft windows, as well as background projections. Kudos to the projection designer, Jon Driscoll. Visuals are a game changer and make this show worth your while.

And it doesn’t stop there. Tricks and slights happen throughout to make the freshly dead appear quickly as ghosts while the corpse lies on the ground and jump through a doors. People fly without being clearly harnessed or on a wire and the lighting is often more like a projection that moves and morphs in space. The design team included an Illusionist, Paul Kieve, who worked on other shows like Hugo and a Harry Potter film. Intimacy or spectacle, this version of the story couldn’t manage both, but projection and professional slight of hand enhance the show enormously. The show, despite its downfalls, makes a worthwhile evening of entertainment.