“There is plenty of food out there,” Sundiata says — “McDonald’s, Burger King, Taco Bell. My argument with them all is how healthy is that food for people in an area that has the highest rates of diabetes, heart disease and cholesterol in Hennepin County.

“I like to call it a food swamp,” continues Sundiata, who runs Northside Fresh, a three-year coalition of nearly 70 community organizations, faith-based groups and individuals funded by Blue Cross-Blue Shield of Minnesota. 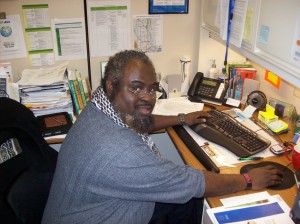 Formerly the Northside Healthy Eating Project, the goal of Northside Fresh “is to increase access to and availability of fresh produce on the North Side of Minneapolis,” Sundiata points out.  The coalition held its official re-kickoff October 24 at the Capri Theater on National Food Day.

Sundiata says the best feedback he received from that event was the question, “We are asking people who can’t afford bad food to buy more expensive good food — how do we do that? How do we make that affordable for our people in North Minneapolis?”

Nonetheless, he believes that can happen here. Sundiata points to examples in such cities as Cleveland, Detroit, and other urban areas with large Black populations “where people have fresh produce from farms. We want to replicate [locally] some of the programs that have worked so well in other urban areas that are worse off than here in North Minneapolis. Now is the time for us to do it [here].”

Establishing “large-scale, high-production facilities based on vertical gardening and all-year-round production” could be a possibility in the area, says Sundiata. “We are trying to see if that could fit our Northside community. That would provide jobs [and] fresh produce all year round, not only for our community but also to some big-box stores.

“It is going to take some thought, some input from community members, and some input from people who already have done it,” says Sundiata, who also is NorthPoint’s  food shelf coordinator.

A chef and baker by trade, Sundiata initially joined NorthPoint in 2004 as a receptionist. A year later, in 2005, “I became the food shelf coordinator. It was eye-opening and heart-wrenching at times, but it was satisfying.”

The food shelf serves 1,000 persons each month, he estimates. “I think about the need, and how that need has grown to get to those who can’t afford [food] or can’t get it,” says Sundiata, adding that the current economic conditions have only exacerbated an already tough situation into a tougher one for some. “That need just keeps growing each year.”

Sundiata says that at least 50 percent of the food shelf clients are now working adults. As a result, “We took away the title ‘emergency food’ three or four years ago and said ‘supplemental food,’ because that’s what it is. They are supplementing their budgets with food from the food shelf in order to pay for medicine, transportation or child care that can be very expensive.

“The whole idea of someone just down and out or a single mom is completely gone and disappeared,” Sundiata points out. “You’ll see husbands and wives who both worked at some point, and one of them lost their job. That puts a serious dent in somebody’s budget. Therefore, they have to supplement their income with whatever services they can get.”

The May tornado that hit the area last spring “affected the numbers hugely,” admits Sundiata.

Now it’s the holidays: “Those numbers, of course, increase over the holidays because people want to be able to celebrate the holidays. If they can’t afford it, they have access to the food shelf,” says Sundiata.

This week, food baskets will be given out to needy families. “Last year it was to the first 100 clients,” Sundiata recalls

Finally, Sundiata says he hopes that as residents this week celebrate Thanksgiving they take time to “count their blessings…while you are sitting there with the table full [of food]” —  to remember those who go day-to-day not knowing if they will have enough food to eat themselves, or enough to feed their family.

“Share the blessing,” he urges. “That’s what Thanksgiving is all about — sharing that blessing. Make sure your neighbor has enough. If you don’t know that, take the time and find out.”