More than 50 people gathered at the Hopkins Center for the Arts on July 25 to “get connected” with Transit for Livable Communities (TLC), and to learn about new media tools that can help them advocate more effectively for transit options in their communities.

Barb Thoman, TLC’s executive director, recalled all of the various arguments people used against funding light rail in 1996, when TLC was in its infancy. Citizen participation, she said, is what made all the difference.

Citizen engagement takes many forms, including voicing support for transit at the legislature, in local newspapers, and during everyday conversations. Thoman said it also means providing financial support to TLC, so that it can continue to develop programs to fully fund a regional transit system, promote walking and bicycling, and strengthen community participation in transportation and development decisions.

Currently, it’s the Southwest light rail line that requires citizen backing. If it gains state bonding support, construction could begin in 2014 on a15-mile line that would connect Minneapolis to Eden Prairie through St. Louis Park, Hopkins, and Minnetonka. Dave Van Hattum, senior policy advocate at TLC, said that the line would carry an estimated 30,000 riders per day, beginning in 2018.

Funded through a mix of federal support, a regional sales tax, and county and state dollars, it’s the 10 percent coming from the state that is “what’s hanging in the balance,” according to Van Hattum. 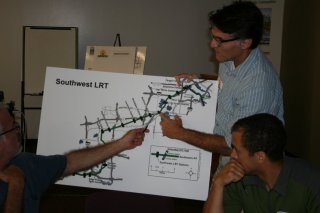 Everyone had opportunities to share why funding mass transit is important to them. Manu Moritz, a TLC intern and Macalester College junior, told about how difficult it is for students like him to think about adding the expense of a car when they also have the financial burden of paying off student loans. With more transit options, that would not be an issue. However, as things stand, access to a car is often essential to getting a job. Fellow TLC intern Tim Lillehaugen, a senior at St. Olaf College, said that a Southwest Light Rail line would make it possible for members of his family, dispersed around the metro area, to see each other much more easily and frequently.

Attendees connected with each other at tables scattered around the room to discuss how an expanded transit system would benefit them and their communities. Access to jobs, the airport, and cultural amenities downtown were among the benefits named. Hilary Reeves, communications director at TLC, emphasized talking to elected officials, friends and acquaintances, as crucial ways to voice support and inform others about the value, process, and status of expanding the region’s transit network.

New media tools put citizens on more equal footing, said Marcos Lopez-Carlson. With approximately one billion users, Facebook can be a powerful tool to get one’s story and message out. The Twin Cities Media Alliance neighborhood engagement coordinator pointed out that Governor Mark Dayton has a Facebook page and that he actively uses it. Facebook also allows regular channels of communication with organizations like Transit for Livable Communities.

Groups on Facebook and circles on Google+ were promoted as ways of bringing people together to share information and news, and as organizing tools. There are different privacy levels on Facebook groups that allow administrators to monitor who joins. These can then become virtual places where events are created, meetings organized, and files shared. According to Lopez-Carlson, they’re also a place where users can determine who might be interested in taking on a certain task, whether it’s door knocking or finding and parsing information to share with the larger group.

Interest lists on Facebook were described as another way to organize content. Any post or activity related to a particular interest (i.e. transit) ends up in a list that a user has created. These items become much more accessible than they would be if they only appeared in the general newsfeed.

More opportunities to Get Connected! 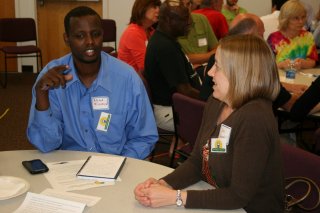 Get Connected! community meetings are part of a larger project of the Twin Cities Media Alliance and Daily Planet. With support from the Bush Foundation, each Get Connected! event is planned and co-hosted with nonprofit organizations that work on one of six issue areas: education, work, health care, immigration, transportation, and the environment. Get Connected! meetings will be scheduled through October.