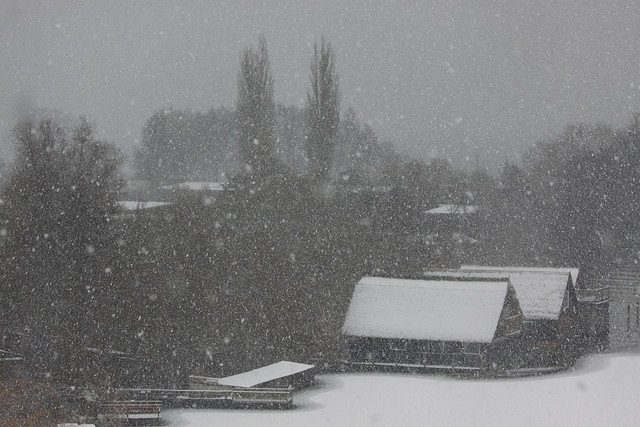 In the winter before my first husband and I divorced, I applied to the Jerome Foundationfor a travel-study grant that involved going to the Arctic town of Resolute. I was writing a play set in the Arctic and discovered Resolute through a conversation with Paul Schurke, who had been part of a North Pole expedition with explorers Will Steger and Ann Bancroft. Paul thought I would learn a lot by going to a place where winter stripped away all pretense of the civilized world.

I have no idea how I would have pulled it off, exactly, as my son was only a toddler, but I believed his dad could be persuaded to manage on his own for the two or three weeks I would be gone. In retrospect, I guess it was magical thinking, though if the grant had come through I would have tried to carry out this last semi-marital adventure.

What attracted me most was the name Resolute. It seemed to connect directly to the next phase of my life, when I’d need the kind of strength people seemed to need in the Arctic. Instead of going there, I continued work on the play, met a few new friends (including another Arctic explorer), began to figure out the business of single parenting and rolled, like a fallen pebble, toward a secular and Jewish divorce. The more I found out about the Jewish divorce, though, the more I began to wish I’d run off to Resolute.

The divorce ceremony consists of writing a bill of divorce and handing it to one’s wife in front of a Jewish rabbinical court, known as bet din. As the wife puts the decree under her arm, the husband more or less sends her away. The more I read about the ceremony, the more it reminded me of the high priest who sent the scapegoat running into the wilderness in ancient Israel.

The divorce document, commonly known as a “Get,” is also called a sefer k’ritut (scroll of cutting off.) It states the day, month, year, town and other details; and then what movie people would call “the money quote:”

I do release, send away, and put aside thee, my wife, . . . who hast been my wife from time past; and thus I do release thee, and send thee away and put thee aside, that thou mayest have permission and control over thyself to go to be married to any man that thou mayest desire; and no man shall hinder thee from this day forever, and thou art permitted to any man, and this shall be unto thee from me a bill of dismissal…

This “dismissal,” as mentioned, takes place in front of a group: a rabbi, witnesses and the scribe who wrote the decree. Once the bet din is satisfied no one was coerced into divorce, the woman is told to remove any rings she may have upon her fingers, and to spread out her hands to receive the Geṭ. The husband places it in her hands, saying: “This is thy bill of divorce, and thou art divorced from me by it, and thou art permitted to any man.”

When the husband is finished speaking, the wife closes her hands and lifts them up with the Geṭ in them. Then the rabbi takes it away from her, reads it a second time with the witnesses, and pronounces the ban of excommunication upon any one who may attempt to invalidate it. Then he tears it crosswise and (as they say in the movies) – that’s that.

As we came closer to the Get ceremony, my misgivings blossomed into full-blown dread. I started thinking about ways to sabotage it, like coming down with chicken pox or lying about a sick mother and going to visit her.

Instead, our synagogue’s retired rabbi arranged it so the divorce was done with agents. “It’s demeaning to the woman,” he said. “I’ll have it sent to you in the mail.’ It was interesting to me that even a rabbi felt this way; but in all the years the ceremony had been in existence, no one thought to change it. Why? And what would happen if more women attended? Would the ceremony change to reflect more equality between husband and wife?

Thinking on it now, I believe my near-trip to the Arctic was an attempt to gain some sort of control over a time that made me feel scared and powerless. What I think I wanted, more than adventure, was acknowledgment from some Jewish source that getting a get doesn’t mean you did something wrong, or that you yourself are wrong. Or if you did, the wrong was created by both of you as a couple—and neither one deserves to be dismissed.

Yet this archaic ceremony, like so many ceremonies, stays the same year after year and century after century. I like that about most of them—but not about this one. Maybe it needs someone to open the windows to a Resolute wind that blows away the smoke of ancient decrees and come up with something saner and kinder. Because divorcing people need kindness—wherever they are.