How do you pronounce “gastro-pub?”

I mean, should the accent be on the first word, gastro, connoting culinary sophistication, or on the second word, pub, as in public house, traditionally an English drinking establishment?

There’s just a hint of tension between the terms: the first sounds high-brow, the second more humble. Gastro also sounds French and pricy, while pub sounds English and cheap.

The answer may depend on which gastro-pub you are talking about. But at the new George and the Dragon at 50th and Bryant in south Minneapolis, which bills itself as a Lynnhurst (neighborhood) Public House, the accent seems to fall fairly equally on both terms, but with a definite nod to England.

The name sounds like a classic English pub, and in fact, there is a pub with the same name in Thurton, England, that dates back to the 15th Century. (Interestingly, the Thurton pub’s menu features dishes like southern fried chicken dippers, crispy duck with hoisin sauce, and chilli and cheese nachos. But I digress.)

At least a few of George and the Dragon’s menu items are rooted in English tradition: sausage rolls, fish and chips ($13), bangers and mash ($13), and a featured curry of the day, part of English cuisine since the era of the British Empire and the Raj. The selection of beers includes such English legendary ales as Old Speckled Hen on draft, and Young’s Double Chocolate stout (both dispensed with a nitrogen tap system, which makes the beers less carbonated, as English beers should be) as well as a couple of English ciders and Murphy’s Irish stout available in cans. 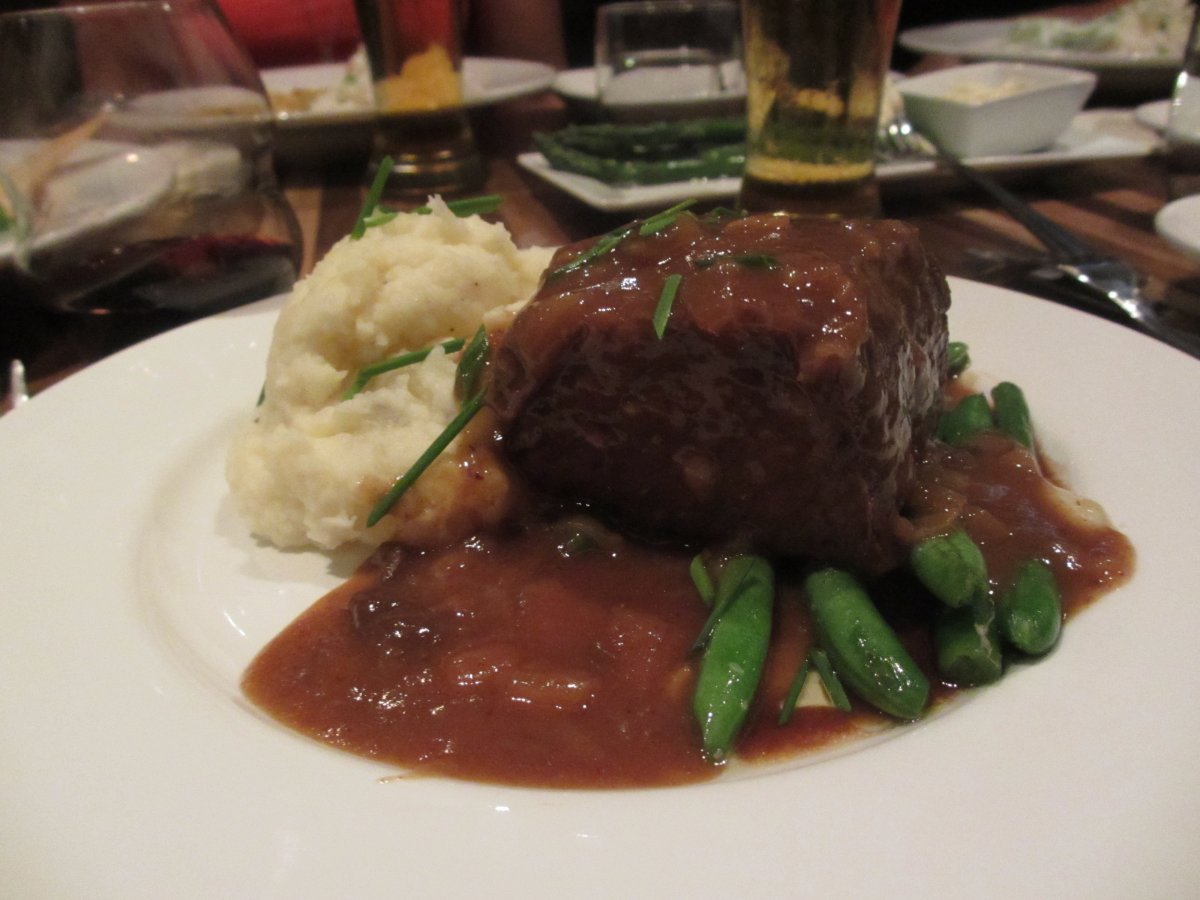 The rest of the menu covers a lot of territory. A lot of dishes fall into the broad categories of comfort food and standard American bar fare: burgers, fried chicken, onion rings and macaroni and cheese, but other items are more adventuresome: lumpia (Filipino egg rolls) , chilled asparagus with a wasabi mayo, beer-battered green beans with a truffle aioli, a banh mi sandwich, and a dish billed as Asian hangover: five-spice pork, jasmine rice, green beans, and a fried egg ($14).

The beer list is equally diverse. Local craft breweries are well represented, including Fulton, Harriet, Summit, Lift Bridge and Brau Brothers, but you can also get a PBR tallboy or a Grain Belt Premium Light. The wine list concentrates on affordable options from Spain, Chile and Argentina—nine out of the 13 wines are offered for $6-$8 or less a glass or $22- $30 a bottle.

We only tried a few dishes, but I have enjoyed nearly everything we sampled. The green beans with truffle oil and the asparagus with wasabi mayo were both irresistible. The dipping sauces transformed innocent green vegetables into potent delivery systems for calories and cholesterol, but after the first bite, we didn’t care. The beef rib braised in Dragon’s Milk (an oak-aged black ale brewed in New Holland, MI) was a tender chunk of boneless beef that brought pot roast to mind, served in a rich brown gravy with mashed potatoes and green beans ($15). The curry of the day, made with shrimp and peas in a coconut cream sauce, tasted more Thai than Indian, but was still delicious—rich, creamy and delicately spicy. 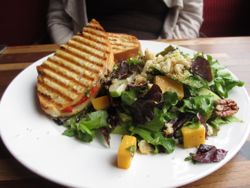 Scottish salmon ($15) makes an appearance in a couple of dishes—in an entree, accompanied by jasmine rice and cucumbers in a creamy dill sauce; and in a more modest (but still generous) portion in the Mary salad ($10), accompanied by chopped arugula and asparagus in a ginger dressing, with cucumbers on the side.

On a lunch visit, my banh mi ($10) was a much heartier sandwich than the versions served at local Vietnamese restaurants, and the ample portion of braised five spice pork tended to dominate the other flavors, but it was still a very tasty—and filling—sandwich. Carol opted for the goat cheese toastie with fresh mozzarella, caramelized onion and roasted red pepper ($10), which was lighter and less robustly flavorful; and replaced the standardc chips (fries) with a side salad of cheddar, apples, pecans and field greens for the standard chips ($3 additional charge).

The decor is simple but tasteful, with salvaged black walnut and other woods used throughout. For my tastes, one flat-screen TV is still one too many, but it’s still fewer than you’ll find at many pubs, gastro and otherwise. Service was friendly and attentive, and on both visits the owner, Fred Navarro (a former manager at Lettuce Entertain You’s Mall of America restaurants), stopped by to add a personal touch.