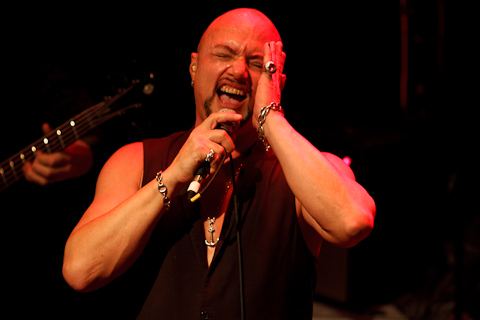 Geoff Tate, the voice of 80s progressive metal band Queensryche, brought his solo tour to Mill City Nights Sunday, November 4. Tate performed songs from his brand new November 6 release King & I, along with the Queensryche material that made him famous. Having played stadium gigs all over the world, it was a real treat to see a seasoned Rock singer of this caliber in a desirable club setting like Mill City Nights.

The room sounded great with a mix that really allowed you the opportunity to hear why Tate is ranked fourteenth on Hit Parader’s list of the 100 Greatest Metal Vocalists of All Time and #2 on That Metal Show‘s top 5 metal vocalists of all time. Even Tate’s speaking voice has an extraordinary quality. He took time out on numerous occasions to talk to the audience and enjoy a little wine, another one of his passions. Tate has his own brand of wine named Insania, which he introduce in 2010 and advertises on his website.

Tate performed an ambitious 23 song set, no small feat for the powerful singer considering he told the crowd it was a record 18 nights in a row. Backed by a very capable band, the show rocked hard and included several standout moments like the encore performance of Silent Lucidity.