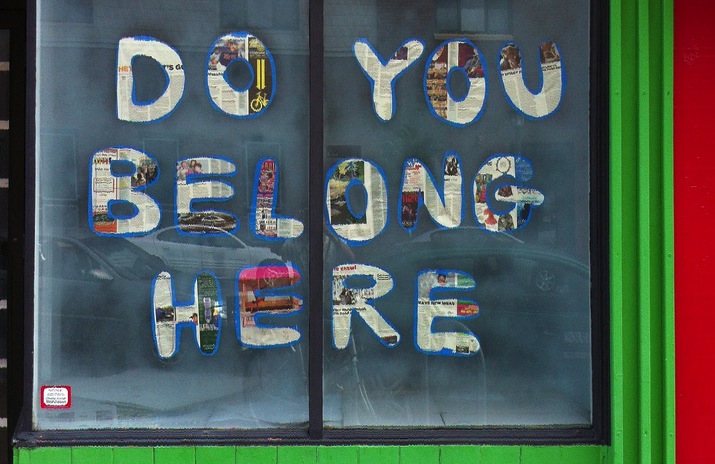 A 2012 installation by Whittier Artists in Storefronts. Photo by Cynthia Frost (Creative Commons).

This week I started a Reporter’s Notebook about a group of families who have to leave their home because their landlord, who took over ownership of their building at the end of last year, has decided to fix up the place. The landlord has given a number of tenants in the building notice to vacate to make way for renovations.

The families I talked to are all immigrant families. Their families are back in their home country, so they have come to trust their neighbors, who have become a kind of family to them. Moving means leaving that network, not to mention the stress of finding a new place they can afford to live. The other apartments that the landlord has offered them as alternatives to move into are too expensive for them to afford.

One reason I’m especially interested in this story: it’s happening in Whittier, my own neighborhood. The building is just a few blocks from where I live. In fact, in the past few months I’ve perused Craigslist for different places to live, and been frustrated by how expensive housing is right now.

Unfortunately, it’s getting to be kind of an attractive neighborhood. It’s close to the Wedge Co-op and many coffee shops and bars; while there aren’t any bodies of water very near by, it’s just a hop skip and a jump to downtown and it’s accessible to lots of different parts of the city.

Now, I don’t consider myself a hipster (maybe a “wannabe hipster,” as the Minneapolis Judgmental Map would have it) but I can’t help but think my neighborhood might be following the classic steps of gentrification, where first you have an affordable area with good transportation, and then it becomes very attractive to artists and creative types, and then all of a sudden it becomes really popular to people with money—and the next thing you know it’s all condos and Starbucks.

Maybe that’s just oversimplifying things, and maybe it’s just an inevitable thing that has always happened and will always happened. I guess the reason I’m thinking about it is because in the last year or so I’ve really been struggling with the idea of “placemaking,” which is just the latest word to mean using arts to enliven an area (culturally and commercially).

When you hear placemaking proponents talking about how to do placemaking ethically, they talk about really involving the community, and making them a core part of the process, so that ideally, as a neighborhood, things get better for everybody who lives there.

But in practice, does that really happen? I realize my own neighborhood is just one example. Still, what I realize is that while I recognize it’s a good thing that the landlord is making improvements on a building that was in need of repairs, it seems unfair that the people who have been paying rent there for years suddenly have to move out, because the rent increases due to those improvements.

The tenants will have to move into some other dilapidated building, most likely in a different part of town. It seems grossly unfair to me.