Golden rice’s recent re-emergence in the news reminded me of how long the biotech industry has been touting this “wonder” crop in order to gain approval for genetic modification more broadly. It appears we’re now seeing a similar tactic with the proposed introduction of genetically modified (GMO) American chestnut trees. Once stretching across the eastern part of the United States and memorialized in countless stories, songs and poems, few trees evoke more nostalgia for America’s past than the Chestnut. However, the American chestnut now mostly lingers in our memory, as the more than 4 billion trees—equaling around a quarter of all hardwoods in the Eastern seaboard—were almost completely wiped out when a disease swept through the country in the early 1900s.

Such emotional connections help to explain the fervor behind efforts to reintroduce this American icon, but also the latent danger in such work. One effort, supported by the American Chestnut Society, has utilized traditional breeding practices to create and introduce a new chestnut hybrid that is resistant to the blight. There is also a competing initiative, led by the College of Environmental Science and Forestry of the State University of New York in Syracuse, which has taken the more controversial approach of genetic modification. The American Chestnut Research and Restoration Center, through transfer of genes native to wheat into the chestnut, has created a blight-resistant version of the American Chestnut, and is intending—with appropriate regulatory support—to introduce this version into the wild. 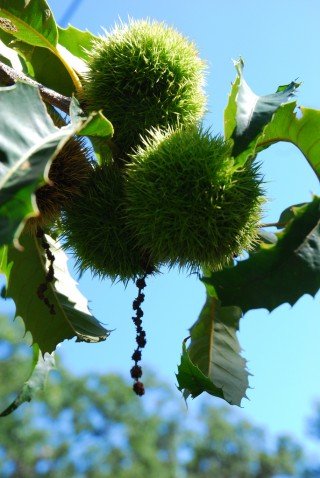 This is the first attempt that I’m aware of in the U.S. to introduce a GMO “wild” tree (several orchard fruit trees have already been approved by the USDA). Fear of the impacts on GMO trees on existing, native trees is the most significant, direct concern. However, for those of us who have lived through the GMO battles, we see something more sinister in this push for GMOs to rescue an American icon: like golden rice, this could be the “Trojan horse” for an industry-wide push for regulatory approval for a variety of GMO trees. Golden rice, which has been genetically modified to include corn genes to produce vitamin A, was the first (and often only thing) mentioned by GMO advocates, who for years touted its ability to reduce hunger and disease. The development of the biotech sector over the last 10 years illustrates that the real focus of genetic modification has mostly been on creating commodity crops with herbicide resistance and incorporation of pesticides. Such an approach has generally been more to the benefit of the transnational corporations that sell many of those very same chemicals, rather than to the farmers who grow the crops or the consumers who eat them. Of course, we’re now seeing the long predicted problems with that singular focus: a significant increase in herbicide and pesticide resistance among the very weeds and pests that the GMOs were intended to stop, leading to more use of more toxic alternatives. Meanwhile, we’re still waiting on golden rice to reduce global hunger.

This bait-and-switch history around golden rice understandably comes to mind now with the GMO chestnut. While even scientists that are skeptical of GMOs acknowledge that the modification of the American chestnut to include a gene from the wheat plant may not be the most risky approach (compared to efforts to introduce insecticides into plants, for example), very real risks do exist both directly and indirectly in taking this new tree out of controlled labs and plots and into the natural environment. If one considers both our admittedly limited understanding of trees and how they interact and work, and how enormous the risk of contamination is for such long-lived species, a basic precautionary and responsible approach would be to exercise extreme caution and patience in introducing something so unknown into the wild where it is impossible to recall.

Other concerns exist about how the GMO chestnut is intended to be used and who is leading the effort. The fact that Duke Energy—the largest energy holding company in the U.S. and a major burner of coal from mountain-top removal mines (with all of the attendant environmental issues)—is a major funder of the GMO effort, based on the chestnut’s ability to be planted on “reclaimed” coal fields as well as its carbon sequestration potential, should give anyone pause. However, a deeper and very real corollary concern exists that the focus on the GMO chestnut is very intentionally tied to its historical and emotional role for Americans, and that regulatory approval for its introduction will also provide the needed precedent to the biotech industry to gain quicker approval for other, less broadly beneficial GMO tree species targeted at the paper, lumber and energy sectors.

In the end, just like with golden rice, there are much safer and proven alternatives to this high-risk and relatively low-reward GMO approach. As many critics pointed out in the early golden rice debates, native and more nutritious alternative crops and grains already exist that could meet the health needs that golden rice was supposedly created to address—what was needed was investment in traditional research and technical support efforts aimed at increasing the production and yields of these crops. Similarly, the blight-resistant chestnut developed by the American Chestnut Society appears to have solved the disease issue without the incumbent regulatory or contamination issues inherent to the GMO variety. At the very moment we’re seeing so many of the predicted problems with GMO agricultural crops emerging, why would we want to introduce a similar risk to our forests?