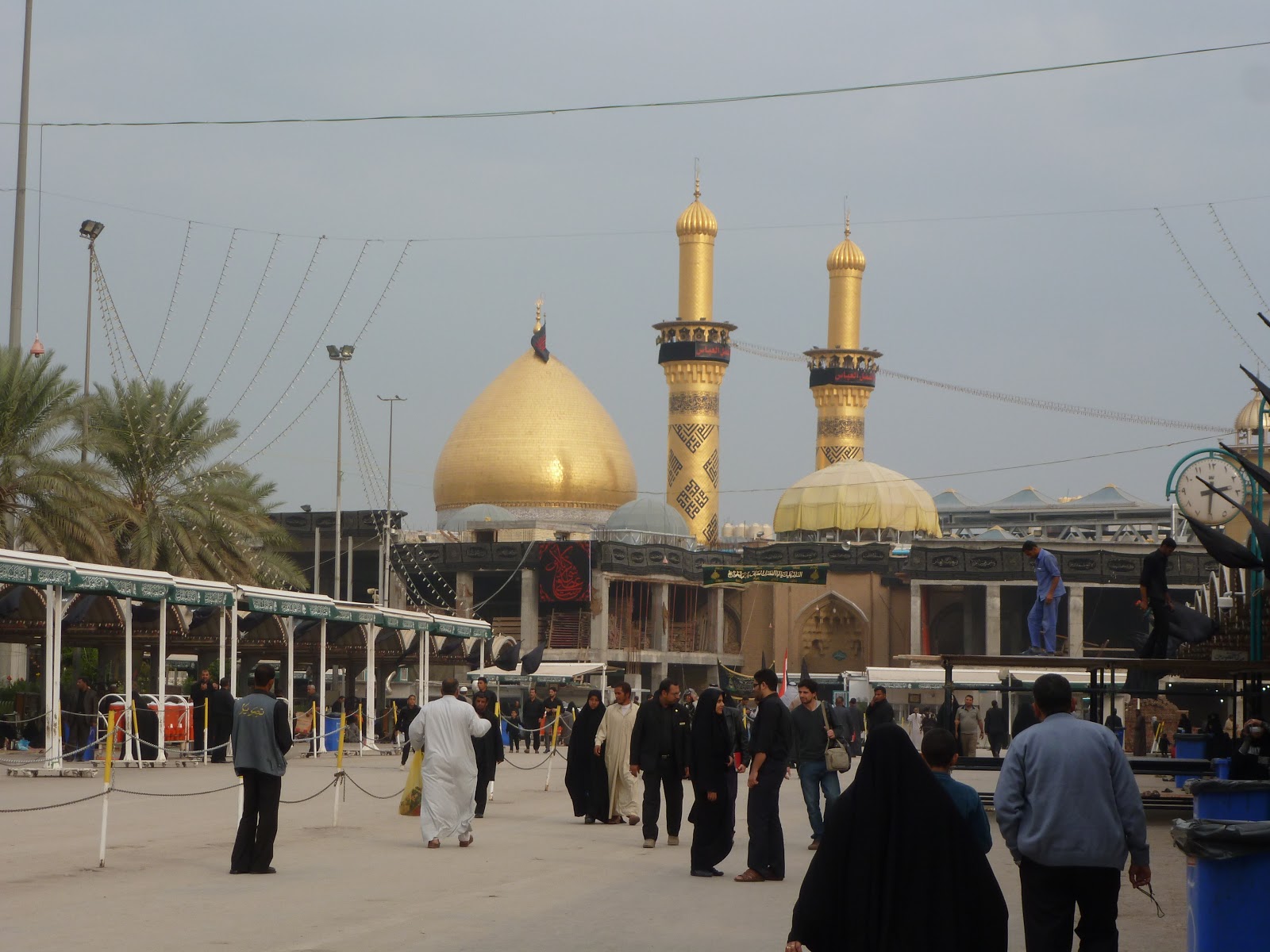 The dinner was held in one of Najaf’s best restaurants according to the former owner of Sinbad’s in south Minneapolis who sold his business to return to help his home nation rebuild during the war. Sami Rasouli and another member of his Muslim Peacemaker Team escorted us to the Holy Shrine of Imam Hussein in Karbala, about an hours drive north of Najaf if one doesn’t allow for the 4-5 checkpoints we must encounter on the 80 kilometer trip. After returning to Najaf and seated at the restaurant, Joan and I were chatting with Mohammed across the table. Mohammed mentioned to me that he had liked what I had written in my blogs which he found cross-posted on my Facebook page and then asked Joan if the “Joan Haan” on his Facebook search was her page. After she affirmed that she was, he sent her a “friend request” and they were connected on Facebook.

Joan, in her direct manner, looked at Mohammed and asked him why his name appeared as “Eng Mohammed” on her screen, commenting that it was a name she hadn’t heard before in Arabic. I said I thought it stood for “engineer” and Mohammed laughed and said, “Yes, I’m an engineer”. With so many Mohammeds, Alis, Ahmeds, etc here, other abbreviations are in order – just like one of my other new friends, Ahmed, who has tacked “Pre” on to his Facebook name because he is a Petrochemical Resources Engineer in his paying job. Then Joan suggested we talk face-to-face rather than text each other across the table. Light-hearted conversation continued through the meal and it wasn’t until the tea was served that conversation for us got serious very quickly.

Our host, a very successful contractor who has made a significant amount of money recently in helping rebuild Najaf since 2004, stood up as Sami translated. The first words were quite shocking to me: “Before you came here, the US was known as the #1 killer of Iraqis. But you came in peace. And today you did the most difficult thing in taking the time and effort to visit the Shrine of Imam Hussein. It shows that you come as friends and God is bringing us all closer together. Now children and adults [here in Najaf] can see a new face of Americans. You came and provided water filters with Sami under the Water For Peace, you sent letters to schoolchildren. Now reconciliation is happening.”

Joan leaned over the table to have better eye contact with our host. “Actually you, with your words to us have initiated this reconciliation with us. And we are so very grateful for your kind words.” All of us in the delegation are acutely aware of how dangerous this reconciling work can be – for both sides. There are those who want to keep us apart, who profit by our animosity and the weapons produced to “protect” ourselves from the other. For Iraqis, they risk being seen as collaborators with the nation whose “Shock and Awe” campaign was designed to force an immediate cowering surrender. For American peacemakers, we risk getting identified with “Muslims”, “terrorists”, and the “other”.

Only as we reach out and offer the olive branch to each other, to look across the table and see the other as our sister, our brother can that healing salve of reconciliation be allowed to help relieve the festering boil of resentment and retaliation. “Reconciliation is now happening”, our host continued. “You’ve come here to help us [with water filters, letters for peace, …], now that Sami has helped me secure a visa [for travel to the US], maybe I can come to your country and help you.” He continued, remarking about people losing homes to foreclosure and other ills in the US.

And then he gave us the invitation: next time, don’t wait for the Governor’s invitation. You don’t even need to contact the Governor – I’m inviting you, I’ll put you up. I want you to return –soon!

It was a long day. The trip to Karbala dusty. I was tired, full, ready to stretch out on my bed and think about what I could write for my blog today. In those brief minutes, with those heartfelt words, I/we were revived. Sami said in his translation, “His heart is full of love and he just keeps repeating how glad he is to be here with you.” This is what the Iraqi & American Reconciliation Project is all about: getting on with the business of healing peoples whose heart has been broken and now want to be whole again. Thank you Hussein for opening your heart to us. May we always be ready to reciprocate in kind.

Abundance beyond generosity: On The Road to Babylon on Day 11

It was raining this morning as we left for the city of Hilla and the nearby ruins of Babylon. We were riding in a 20+ passenger bus with members of the Muslim Peacemaker Team as we headed about 45 minutes north of Najaf. Deborah, a delegate from Boston had asked Sami Rasouli a question about the structure of the Arabic language in comparison to English. Sami was explaining the difference between a “request” and an “order” when someone is asking another to do something and the conversation flowed into a discussion about our differing cultures. Because of his long-time experience both as an American and an Iraqi, Sami has been an ideal guide in helping us navigate between the two cultures on this journey of reconciliation.

Sami started talking about the culture of generosity in Iraq and gave this illustration: many individuals have approached him about hosting our American delegation. Some want generously want to take us to a restaurant and buy us a meal. The restaurant might be even a five-star rated establishment but you will still order only one meal each when you are there. Other Iraqis have asked to host us in their homes. Even though our delegation is only 7 foreigners and are accompanied by as many as 7 additional MPT members, one host had made enough food to serve 100 people! That is abundance. The host not only has welcomed us into his home, already a gesture of honor and respect, but in providing so much food so no one could possibly go hungry communicates a measure of abundance which flows out of his hospitality.

The host and his family did not eat with us – they waited until his honored guests had their fill and only then, as we gathered in another room for fruit, sweets, and tea, did the family members eat. Sami tells us that other Iraqis are vying for the opportunity to host us, outdoing one another. Here in a land without reliable energy from the national grid or clean enough water from the local treatment plant one might expect a culture of scarcity and protecting what you’ve gotten already. Of course there is some of that; Iraqis are humans and humans often fall short of the goals set by themselves and others.

We witnessed the flip side to abundance as we stopped to visit the tomb of the Prophet Ezekiel of Hebrew Bible fame. It is located in a small town between Hilla and Najaf. The grab for power and the use of authority to exercise that power over others depends on scarcity rather than abundance. After walking through the souk to get to the path to get to the site where the bones of the Old Testament prophet, exiled to Babylon, were buried, our group was halted by an Iraqi policeman who told us we couldn’t enter. After an animated back and forth between Sami, Ishan (an MPT member) and the three policeman who gathered, Sami tells us we must leave for our own security. 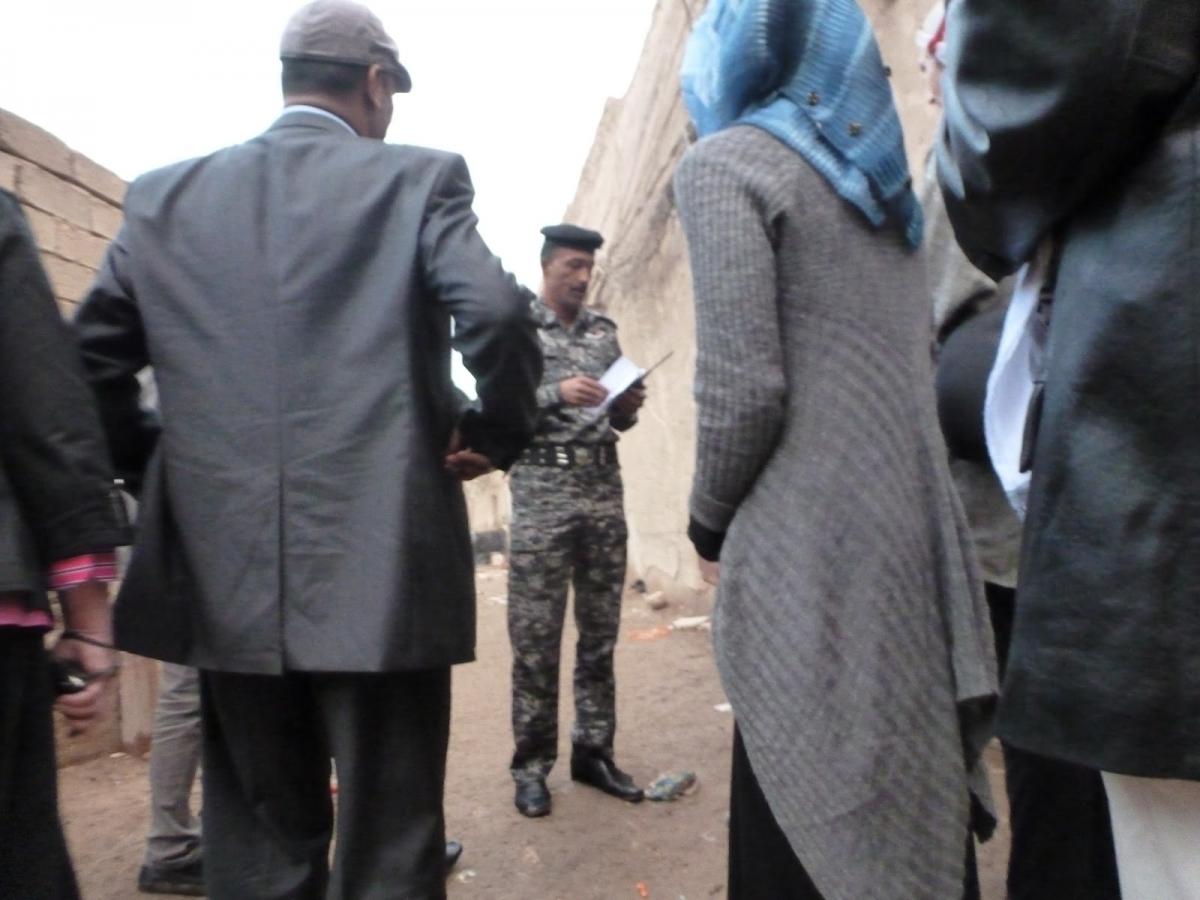 After returning to the bus, Sami tells us the policeman noted there were foreigners in our group and this local policeman wanted to exercise his authority by being able to tell us “No!” The excuse given was that the tomb was under repair and they were afraid we’d take pictures and make it look like the Iraqis weren’t preserving this historical site properly. Sami speculated however that the real reason might be because he saw foreigners and we might be Jews because many of the foreigners visiting are Jews. Despite all the deference given to “People of the Book” by those promoting inter-faith dialog, many ordinary Iraqis, just like typical Americans, are often influenced by negative stereotypes promoted by the media or politicians.

Another classic example of power rather than generosity/abundance was very evident at the ruins of Babylon. Across the Euphrates River, on a hill overlooking the partially excavated site of one of the most famous cities in the world, is a palace constructed by Saddam Hussein. That megalomaniac fancied himself as the new Nebuchadnezzar, and he promoted himself as the Lion of Babylon. After all, he had much of the wall of the city rebuilt during his reign to the dismay and scorn of real archeologists who wrote off the work as inauthentic. Even some of the bricks are inscribed with Saddam’s handwriting in a way to mimic the real bricks that have writing dating back to Nebuchadnezzar’s age. For Saddam, ruling a country with an iron fist wasn’t enough – he imagined himself as an historical figure. Maybe he is correct: he’s now viewed historically as someone who produced great and lasting danger and destruction to his own country. 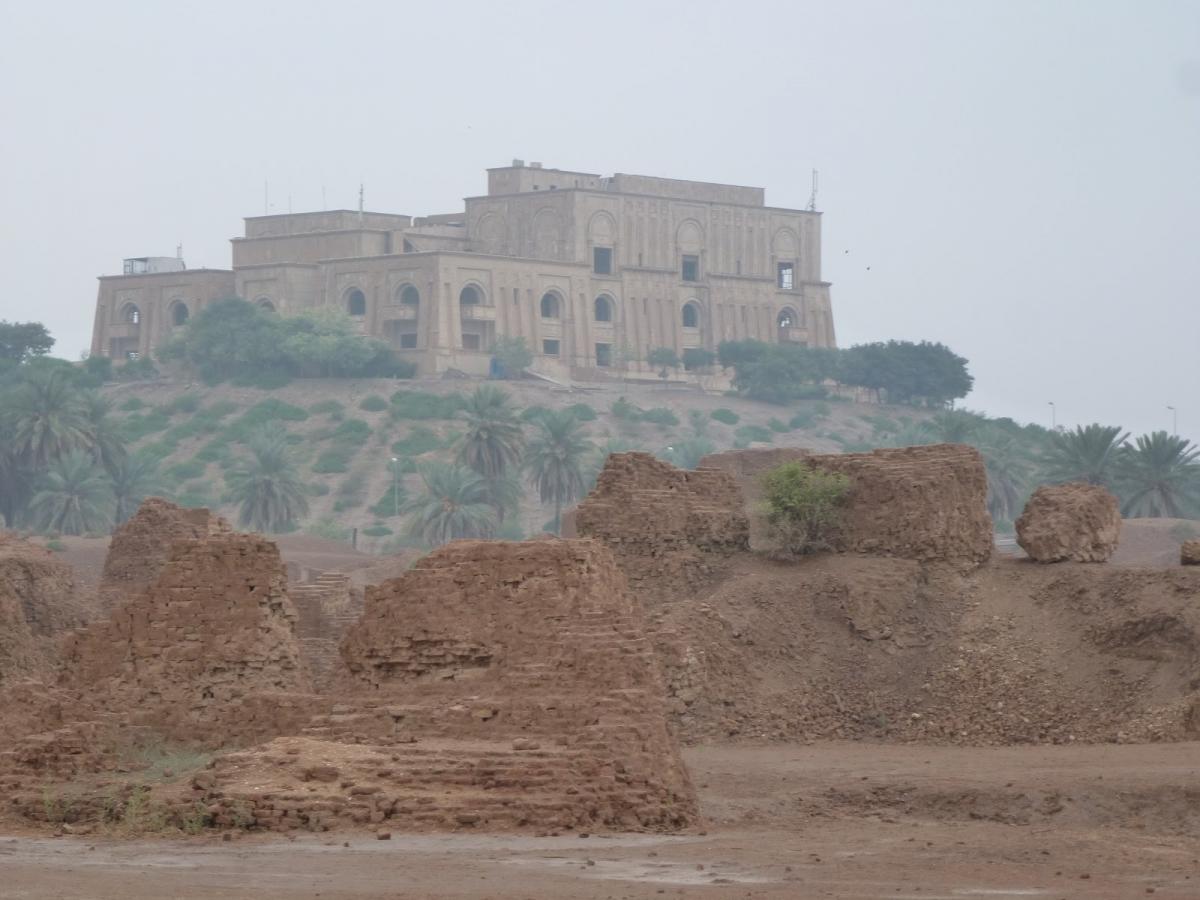 But let us return to abundance. Sami is a great storyteller. He regaled us with an account of a US soldier and a Najafi civilian resident. After an encounter at a checkpoint, the man from Najaf invited the American soldier to visit him in his home – provided he came without his uniform or his gun. When the American arrived, the Najafi invited others of his friends to come meet the American. They clambered to invite him into their own homes – again with the same conditions, no weapons, no uniform. He was feted with tea and the Iraqi hospitality and he left realizing that “the enemy” was just like himself. When the soldier returned to his barracks, he told his fellow troops about his experience and he was quickly disciplined and removed from that base. If you question who is the enemy, you can no longer be trusted to follow orders is the presumption made by officers in charge. After all, if the enemy is one you can break bread with, they actually become human rather than stereotypes. Thus abundance, generosity acted upon becomes the heart and soul of nonviolence.