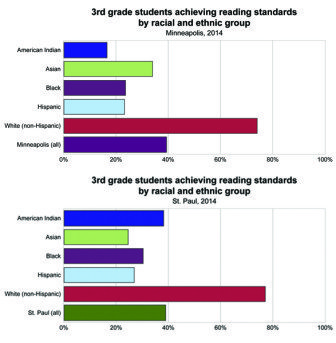 We’ve heard it before: Kids of color lag behind Whites

When it comes to Generation Next, partnerships and outreach play a key role in their hopes-for success. “We’re kind of an opt-in effort, and the more folks you get to opt-in the greater [our] likelihood [of success is]” said Jerimiah Ellis in a previous MSR article (“Outreach director brings diversity to Generation Next team: St. Paul NAACP takes a wait-and-see approach on endorsing initiative,” Dec. 25, 2014).

What plays into the success of Director of Partnerships and Outreach Jeremiah Ellis? In his own words, “I rely on Jonathan to get me the right numbers” to ensure he has the right facts and data to do his job. Jonathan May is director of data and research for Generation Next.

So, what’s this data all about and what’s the process in obtaining it? “When you look at the data locally, in Minneapolis and St. Paul, almost all breakdowns differ on racial lines,” says May. “Even if you look at something specific like income, poor White students still typically do better than poor African American students.” According to May, others at the organization, and their website, Generation Next defines the achievement gap by the difference in achievement between White students and their counterparts because that’s what the data shows them. To obtain this data, Generation Next has partnered with the Wilder Foundation, which was a “no-brainer” according to May.

“We reached out to Wilder and wanted to partner with them because the organization has strong ties to the local community and is nationally renowned for its quality research and data collection and analysis capabilities,” says May.

Allison Liuzzi, a research scientist for Wilder, confirms that they have been in partnership with Generation Next since the beginning. In a phone interview, Liuzzi said that she primarily works on the Minnesota Compass project, which, according to their site, tracks and analyzes “trends in areas that affect our quality of life.” It was this work that she’s been tracking for roughly seven years that put her in connection with Generation Next through Wilder.

Liuzzi sees that there is an achievement gap by race; however, she also made it a point to say there’s a gap by income as well. Moving forward, she hopes that the two organizations can do more collaborative work, but for now she says the focus is on developing strategies and looking to provide more data in order to give the five goals more context.

The five goals that Generation Next has identified as key areas that correlate to the achievement gap are:

“We have put together the data that [is] on the Generation Next [web]site,” says Liuzzi. This data is put on their site because Generation Next believes that it should and needs to be available to the public for a collective impact.

“Some of the most important aspects of collective impact initiatives like ours are shared goals, shared impact and shared accountability,” says May. “We believe that part of holding the community accountable for the high standards it agreed to [the five goals] is to make as much of the data publicly available as possible. This allows the community to see if it is having the desired impact in the appropriate timeframe.”

Aside from what’s public, how about behind the scenes? According to May, he takes part in a “data committee” that meets monthly where they “discuss issues and implications related to recent [educational] data releases.” Some of the experts in this group represent both Hennepin and Ramsey County, Minnesota’s Department of Education, the University of Minnesota, and more. “We have also convened a subgroup of this committee, which has been working on research and a proposal for future Generation Next actions in the social-emotional skills area of education,” May says.

As of today, most of the data on the site is as current as 2013-2014, and Mays says that they’ll keep updating it as the new data comes in. Due to Generation Next defining the achievement gap by race, May says they focus their analysis on the racial differences.

He adds, “It is not the only focus of our work, as we want all students to succeed, regardless of the race [or] ethnicity.”

To view the data used by Generation Next, go to www.gennext msp.org/about-the-data/.