Is the economy growing? The short answer is “Yes”, but the long answer is “No”. Real Gross Domestic Product (GDP) growth rate for the first quarter of 2012 came in at 2.2% annualized, which is at least a positive number. The UK and Spain can’t claim that, falling into recessions for the second time since 2008. But this is nowhere near enough growth to create jobs and keep the forward momentum building at the end of 2011.

Some will blame rising gasoline prices and others will cite the sharp declines in government spending, especially at the state and local level. Still others will refer to ongoing investor unease and unwillingness to put money into new projects. But this is all speculation. What we do know is that job growth has led the recovery so far and probably will have to in the next quarter if this will turn around. And that’s exactly backwards from what you typically see in a recovery. 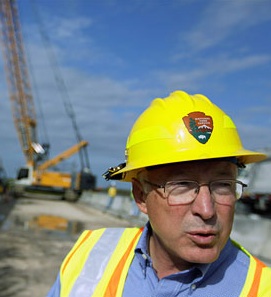 The problem is shown in the simple regression that we return to often in Barataria. There should not be any significant job growth in a recovery unless real (inflation adjusted) GDP growth exceeds about 3.3%. That level hasn’t been reached since the start of 2010, the time when the total jobs hit the bottom and started heading back up. You can see for yourself how anemic the economy has been for the last 12 years, even before you take out the aggressive stimuli in the form of deficits and low interest rates over the entire period. Here is the official GDP growth figure since 2000: 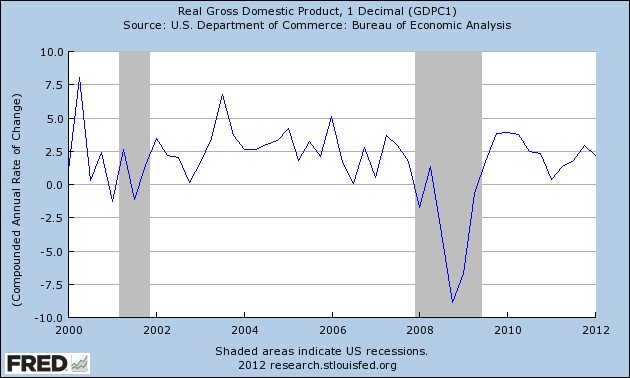 Throw on top of it the net gain in jobs year over year, and you have this figure: 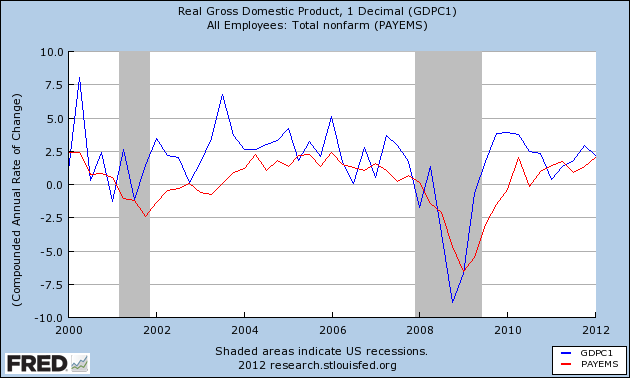 Note that in the last 12 years we never had sustained growth in jobs unless GDP growth was above the midpoint between 2.5 and 5.0 – until recently. That pattern has been more or less the same since the Great Depression of 1929 (and we don’t have good data before that, so it may go back further).

The official jobs figure for March showed a drop in growth that had many people scared. Looking at the recent GDP figure, that jobs figure appears real – but it still does not square with the ADP job count, which showed sustained growth. The answer will come with the April jobs numbers and potential upward revision to March.

But is it possible to have any kind of sustained job growth without GDP growth quite a bit stronger than we have had so far? Nearly anyone who follows this stuff will tell you that, no, there is no way that the decent monthly increases in the number of jobs can continue without a stronger economy.

Except me, that is. There is one small ray of hope that I will hold out and offer as a bet to anyone who thinks that we are not in a longer-term economic restructuring that is better called a “Depression”. One characteristic of events like this is that demand for nearly everything drops off because people do not have money to spend on anything. That means, generally, that job growth has to lead economic growth because there is no economy without people making an income.

So I will now place my bet with the April employment figures. If they show a solid increase in jobs, on the order of 200k, and there is an upward revision to March, we will at the very least be in a very rare situation. Yet I think this is exactly what we will see simply because we have seen this momentum building through 2011 – and trends to have a tendency to continue. And I think that this is characteristic of the restructuring we can expect at the end of a Depression as larger firms sit tight and even increase their layoffs while small operations create new opportunities wherever they can – because people are hungry.

That’s the bet – a solid jobs report for April and this has to be a Depression. At the very least I hope you can see that something very strange is up if job growth does not crash back down to zero.

More to the point, I don’t see that we can have sustained GDP growth until there is significant job growth, which is probably the only thing that can fuel an increase in optimism right now. And I’m willing to bet that’s what is going on.