The John Biggers Seed Project (Seed), a public art and design effort that engages renowned African-American artists in mentoring young artists, revealed its designs for a massive art project that seeks to transform the Olson Memorial Highway Bridge over Interstate 94.

The plans were displayed at the University of Minnesota Urban Research and Outreach-Engagement Center (UROC), 2001 Plymouth Ave. N. UROC is one of the project partners. Seed plans to rebuild the walls of the bridge between East and West Lyndale Avenues over the freeway to make the area more pedestrian-friendly and to create a “new gateway” between north Minneapolis and downtown.

It will feature over 300 porcelain enamel panels, approximately 4×6 feet tall, created by fusing glass material onto steel, allowing for vibrant and intricate artwork. Besides its elegance and color, the artists decided to use porcelain enamel because it is exceptionally durable compared to other art media. Construction on the bridge is expected to be complete in early 2015. 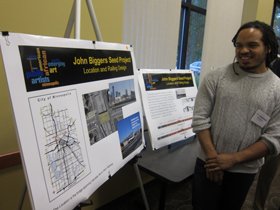 “It’s been great to be able to collaborate with so many different artists on this,” said Jeremiah Bey Ellison (right), an emerging artist building the enamel panels as well as working on the overall design. “But of course, at the same time, we’re all trying to get our individual voices through.”

Seed as a community art effort tries to create a sense of place that speaks to the culture of north Minneapolis for young artists in the community. Master artists are able to provide career development skills and education about African-American art history. Obsidian Arts and Juxtaposition Arts, partners on the Olson Memorial Highway bridge project, were organizations that Seed helped to create.

The art collaborative was inspired by the “Celebration of Life” mural created in 1996, an acclaimed public artwork led by John Biggers, a highly-respected and influential African-American artist. The mural was painted onto a freeway sound-wall located at Lyndale Avenue N and Olson Memorial Highway. It had used mythical symbols to convey a tale about the beginning of life and quickly became an inspiration for African-American artists in north Minneapolis.

Shortly after Biggers’ death in 2001, despite fierce opposition from the community, the City of Minneapolis tore the mural down in a midnight deal to make way for the Heritage Park housing project. Aiken and Jones both worked with Biggers to create “Celebration of Life” and said its destruction cut deep. They soon started The John Biggers Seed Project in his honor and hope that the Olson Memorial Highway Bridge project over I-94 will commemorate the tragic loss that the community suffered and will plant a new seed that will serve to inspire young artists in north Minneapolis. 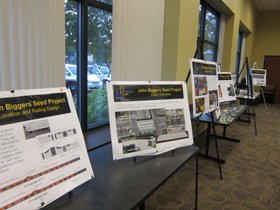 They are happy to be working with master artists Bing Davis and Onye Lockard, who also worked with Biggers during his lifetime.

“The storyline and design developed by the Seed artists speaks the same visual language, as spoken by Bing Davis, Jon Lockard and John Biggers,” said Jones.

The project is funded partially by the City of Minneapolis Art in Public Places Program, the National Endowment for the Arts Our Town Program, the McKnight Foundation Regions and Communities Program, the Pohlad Family Foundation and the North Loop Association. The artists are encouraging donations at their IndieGoGo.com webpage (listed under The John Biggers Art Bridge Project), which will be available until July 17.