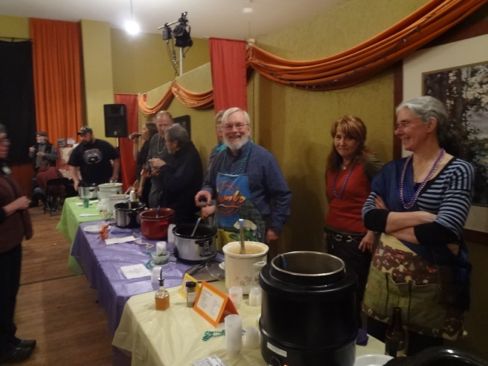 I know most folks don’t think of Pepin County, Wisconsin as a foodie hotspot—at least during the depths of winter, when the legendary Harbor View Cafe is closed—but I visited last weekend, and hit the gastronomic jackpot: the third annual Gumbo Cookoff at the Widespot Performing Arts Center in Stockholm on Saturday night, followed by Beulah’s potato dumplings at Ralph’s Bar and Mary’s Kitchen in Pepin.

And it turns out I only scratched the surface.

Nine cooks entered the gumbo cookoff, interpreting the classic New Orleans stew in a surprisingly wide variety of styles ranging from vegan to kosher (or semi-kosher)—i.e., no pork or shellfish. Ingredients ranged from the traditional shrimp, crab, file, okra and andouille sausage to seitan, corn and mustard greens. None of this year’s entries contained any crawfish, another traditional Cajun/Creole ingredient, though it has been featured in past competitions. Apparently, though it may be considered a delicacy in Louisiana, in western Wisconsin, crawdads are considered bait. 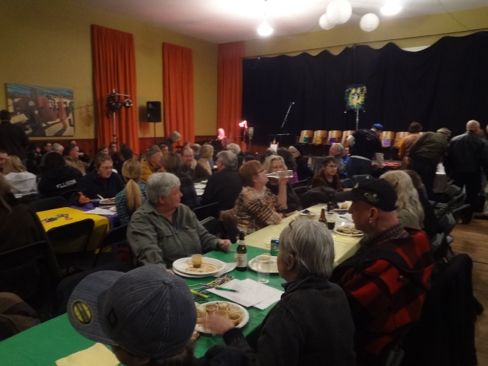 More than 100 people bought $7 tickets, and everybody who bought a ticket got to vote. In the interest of full disclosure, it should be noted that one of the contestants, Bruce Johnson, invited a few of his friends down from the Twin Cities and put them up overnight. This may explain the third-place finish for Bruce’s semi-kosher gumbo in this hard-fought contest. Just kidding—it really was delicious. As Bruce, a recent transplant from Minnesota, immerses himself in Wisconsin’s rough and tumble politics, it’s good to know that he knows how to fight hard.

For the record, second place went to Fred Harding, and first prize went to Cindy Boyer—both of whom served up very tasty gumbos. 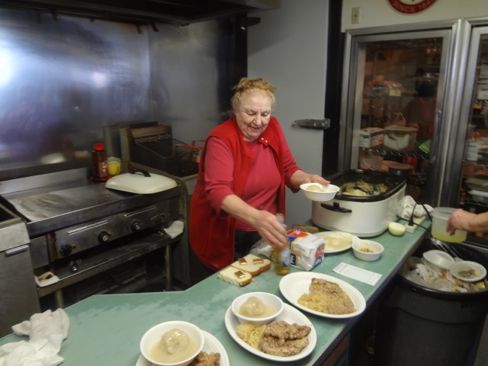 The other highlight of the weekend was Beulah’s potato dumplings. Beulah Schutz is, I am told, a fixture on the western Wisconsin food scene, having owned various bars around the area over the decades. These days, I am told, she shows up every couple of months or so at Ralph’s Bar and Mary’s Kitchen in Pepin to cook her dumplings, an sometimes cooks up a nightly special on Monday nights at a bar in the unincorporated town of Exile. Or maybe it’s the Exile Tavern in Plum City, or the Exile Bar in Elmwood—better call before you go.

They started serving at Ralph and Mary’s at 11:30, and by the time we arrived around 1 p.m. the roast chicken was all gone. So we had to order our potato dumplings with pork steak, lightly breaded and quite tasty. Talk about a great deal: pork steak, sauerkraut, two slices of white bread, butter, and a potato dumpling the size of a baseball and buttery smooth, in a pool of savory gravy, all for $9.50. According to Beulah, the dish is of German origin, but given the color scheme, it might appeal to Swedes or Norwegians as well, and it was a lot tastier than lutefisk. Also, it had the kind of solidity that can be helpful when you have to go out afterwards into a freezing wind, even if you have also filled your tank with antifreeze, so to speak, before leaving the bar. 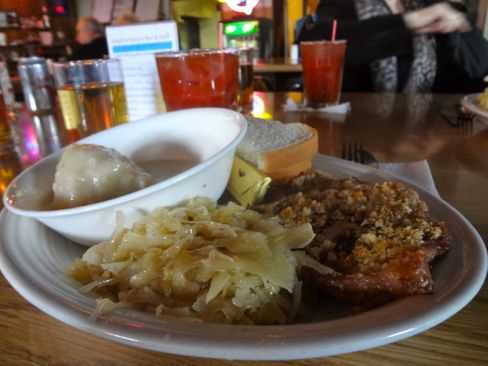 You might think that a dish of potato dumpling, gravy, fried pork steak, butter and sauerkraut isn’t very healthy, but there is compelling evidence to disprove that belief. I am told that shortly before we arrived, one of the tables near the door was occupied by Beulah’s three older siblings, aged 92, 90, and 88.

At any rate, there is a lot more good food on the horizon in Pepin and surroundings. The legendary Harbor View Cafe in Pepin is scheduled to reopen on March 15, and the famous Tuesday night pizzas at the A to Z Produce and Bakery farm outside Stockholm resume next Tuesday, February 26. For one night on Saturday, February 23, and again on Saturday March 23, the Great River Roasters Cafe in Pepin will be transformed into Cucina Ceci, featuring authentic northern Italian country cooking (reservations recommended; follow the link for details).

Next time I visit Pepin, I am also going to be sure to stop in at the tasting room at the Villa Bellezza Winery and Vineyards just on the outskirts of town. Their tasting room is open 365 days a year, and features wines made from their own grapes, as well as grapes from other growers in Wisconsin, Minnesota, and Iowa.