Good food is where you find it, and my most recent discoveries run the gamut from pub grub at the Public House in the Warehouse District, the Sunday night cheap date night at  Rinata in Uptown, and the dim sum at Yangtzein St. Louis Park.

Gastropubs seem to be opening at the rate about one a week – including the Pig and Fiddle, the new Muddy Waters, Republic, Pat’s Tap, and the Amsterdam Bar & Cafe. On the whole, I think this is an exciting new trend, but there is a formula to it — a big selection of craft brews on tap, and updated versions of traditional pub fare.

The Public House at 700 N. Washington strips the concept down to the bare essentials — a minimal ambiance with concrete floor and exposed ceiling vents in a matching shade of gray,  and a shorter menu than most, with a few panini sandwiches, a couple of salads and about three entrees, including a shepherd’s pie, truffled macaroni and cheese, and a rolled roast of pork. 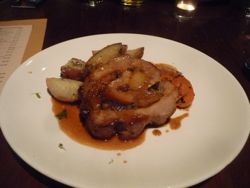 We enjoyed almost everything we tasted, starting with the quesadillas stuffed with citrus marinated shrimp and melted cheese ($7), accompanied by a lively pico de gallo and a dollop of sour cream. The Caesar salad was also a winner, flecked white morsels of white anchovy, and splashed with a tangy Caesar dressing. The stuffed pork loin ($12) was comfort food at its best — a rolled loin filled with croutons, herbs and baked apple, accompanied by roasted potatoes and carrots. We also thoroughly enjoyed the truffled macaroni and cheese($10/$12 with Serrano ham), with a panko crumb topping, though we all agreed that we could not detect any truffle flavor in the dish.

We mentioned this to our server, and soon therefter, the chef emerged from the kitchen, eager to dispute the point. He never did succeed in convincing us that there were any truffle shavings or truffle oil in the dish, but he did convince us that he is passionate about his cooking. The tap beer selection isn’t as big as at a lot of the new gastropubs, but the Public House offers a well-chosen list, with a nice selection from local craft breweries, including Fulton in Minneapolis, Lucid in Minnetonka, and Lucette in Menomonie, WI.

It isn’t easy to find a good place to eat after 9 p.m. on a Sunday night, but we were delighted to discover that Rinata, 2451 Hennepin Ave. S., stays open Sundays till 10 p.m. We are already big fans of their happy hour — 4:30 to 6 p.m. daily, and 9 to 11 p.m. on Friday and Saturday nights, when they offer small plates and selected wines and beers for $3, and pizzas for $5. It’s an unpretentious little Italian trattoria with friendly, attentive service and a simple but romantic ambience of dark wood and soft lighting. 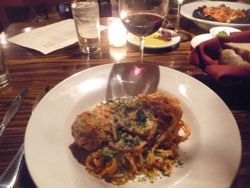 We were even more delighted to discover that Sunday night is Rinata’s cheap date night, when they feature a four-course menu for $20. The choices are drawn from the regular menu: antipasti options of smoked salmon bruschetta, marinated olives or roasted butternut squash soup; a choice of Caesar or baby arugela salad, and pasta entrees of ravioli with butternut squash; fettucini with gulf shrimp, mussels and sundried tomato pesto, or spaghetti with meatballs. Finally, for dessert, a choice between a house made gelato (apple custard) or tiramisu with creme anglaise.

Some of the portions may have been down-sized a bit, as they often are on prix-fixe menus, but the portion was still ample, and it’s a terrific value for the price. 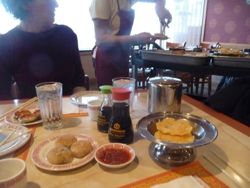 Last but not least, we stopped for dim sum last Saturday at Yangtze, 5625 Wayzata Blvd.,  St. Louis Park. I wouldn’t rate the dim sum here as the best in the Twin Cities  – that honor probably belongs to either the Mandarin Kitchen in Bloomington, which offers the biggest selection and the longest wait for a table, or else to Pagoda in Dinkytown, also a big selection, and no waiting. But Yangtze does have one feature that seems to be unique locally: they offer many varieties of shrimp dim sum that are made without pork. (At Pagoda, for example, many of the shrimp dim sum are actually stuffed with a blend of shrimp and pork. I think the blended versions are more flavorful, but for people who don’t eat pork, it’s an important difference. We tried about half a dozen of these, ranging from shrimp-stuffed peppers and shrimp stuffed fried wontons to shrimp rolls wrapped in nori.  The Yangtze ordinarily serves dim sum only on Saturday and Sunday from 10 a.m. to 2 p.m., but in observance of Chinese New Years, they will also serve dim sum during those same hours on Monday, January 23.