Anticipating our trip to Vietnam, Carol and I each had a big gastronomic question in mind:

I wondered how our favorite Twin Cities Vietnamese restaurants – places like Ngon, Jasmine 26, Saigon, Hoa Bien and Hoang Thien Y would stack up against the genuine article.
Carol who doesn’t eat
meat, but does eat fish and seafood, just wondered whether she would find enough that she could eat.
The answer to my question soon became clear: for quality and authenticity, the best Twin Cities Vietnamese restaurants can hold their own against most of the places we tried in Vietnam. I am sure that we didn’t visit Vietnam’s best restaurants, but I would rank the versions of pho (beef noodle soup) that I have had at Saigon and Ngon above what I had in Hanoi. And the bun bo Hue – spicy beef and pork soup – at Hoan Deli on Eat Street was much richer and tastier than the renditions I sampled in Hue or Ho Chi Minh City (shown here). 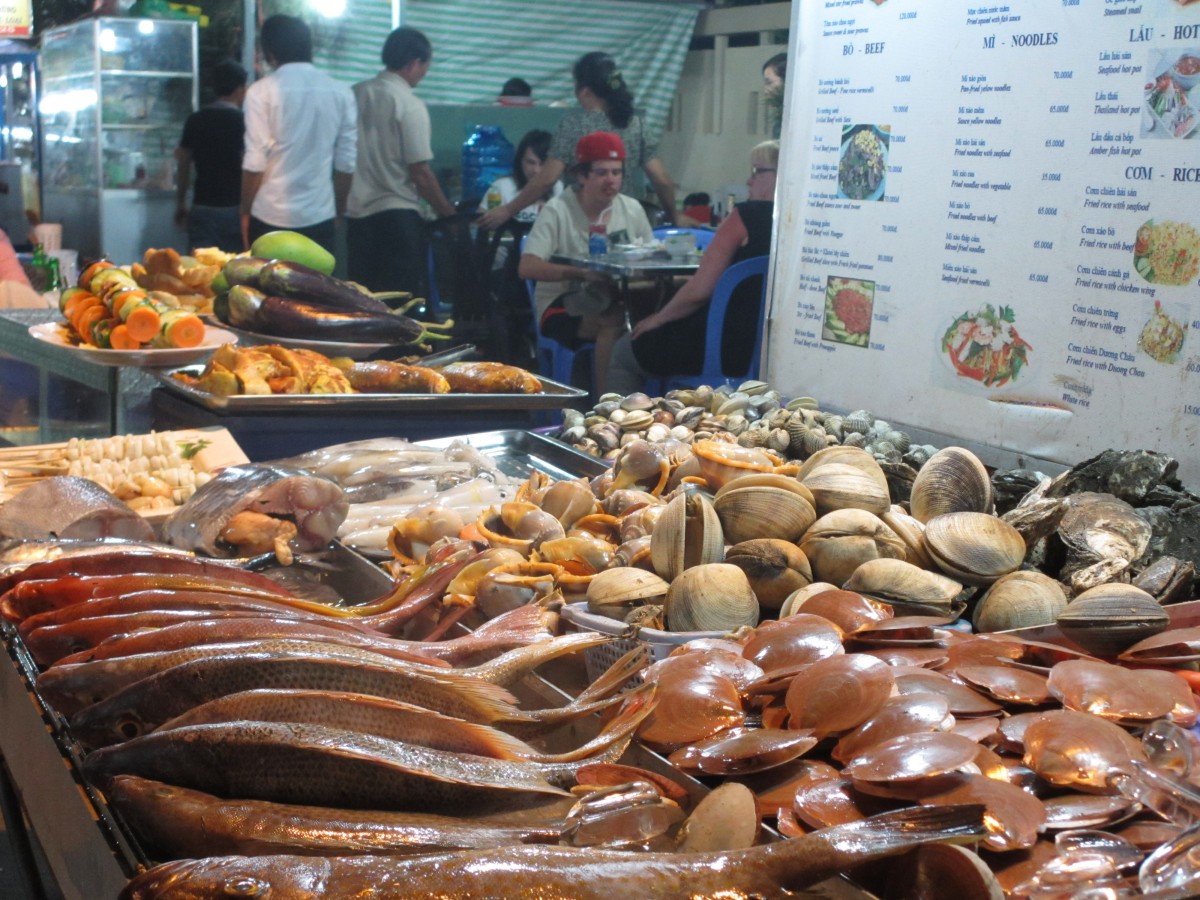 On the other hand, the fresh seafood in Vietnam is outstanding, and the variety is much greater than you can find at local Vietnamese restaurants. At the night market in Duong Dong, on the island of Phu Quoc, a dozen market stall cafes display their freshly caught fish, crab, clams, shrimp, snails, sea urchins and more – you pick out what you want and it arrives steaming hot at your table – steamed, cooked in a hot pot, or grilled over charcoal.
We didn’t realize just how fresh the seafood was until one night in Cat Ba City, when we ordered a seafood hot pot. The pot of broth was brought our our table boiling hot, with plates of raw clams, fish and shrimp on the side. We added the fish and clams to the pot without incident, but when Carol tried to add the shrimp, one of them jumped off the plate and tried to escape.
There were a few other not-for-the-squeamish moments on our travels: in a market in Hanoi, a haunch of roasted meat that looked like pork – but was actually dog. And at a sidewalk soup stall, eggs containing unhatched chicken embryos cut up and served as an optional topping for crab meat soup. 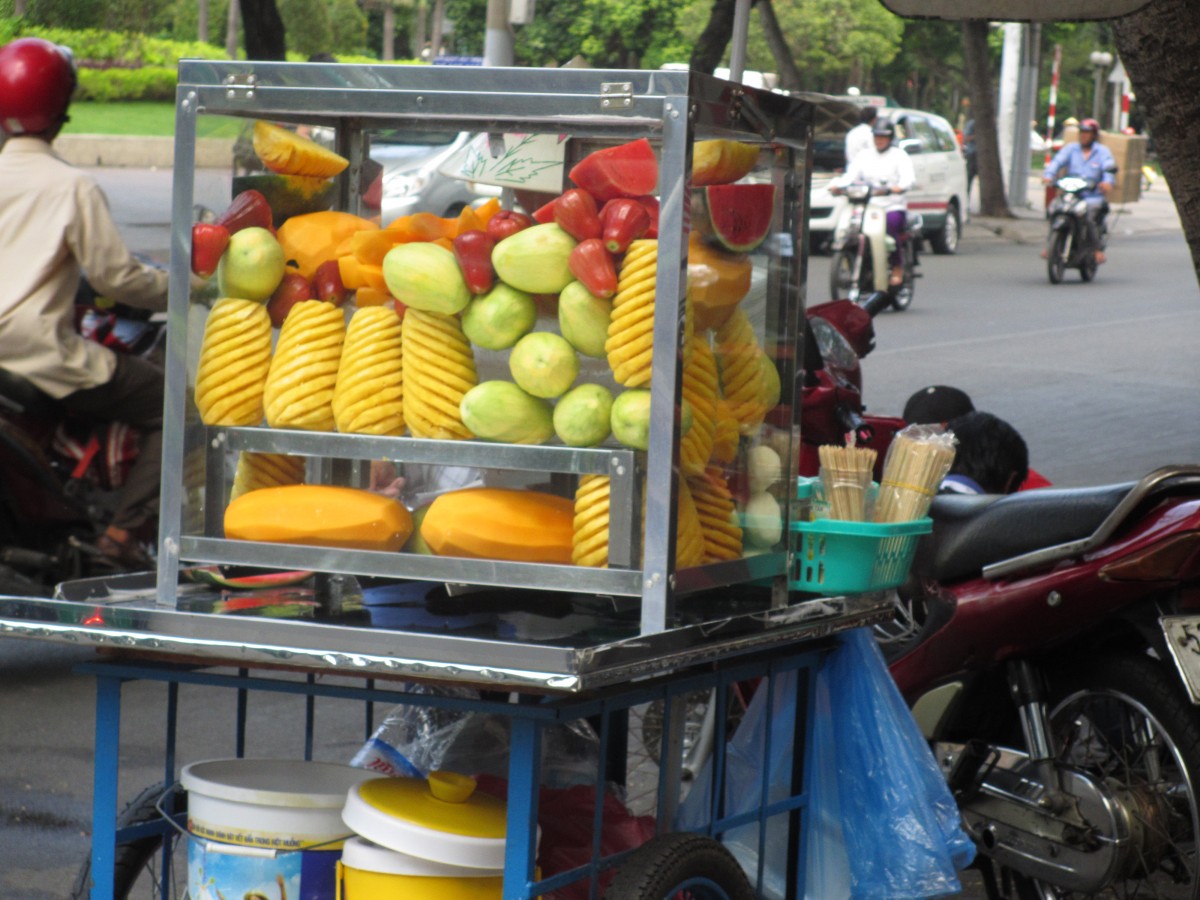 The abundance of seafood meant that Carol didn’t have much trouble finding things to eat – but it was still occasionally tricky. Soups were pretty much off-limits – even seafood soups turned out to be have meat stock in the broth. And sometimes stir-fried vegetable or seafood dishes had a little meat tossed in for extra flavor. We had read that because many Vietnamese are Buddhists, many restaurants serve meatless dishes on the first and 15th of the lunar month, but we saw very little vegetarian fare. We did find an excellent vegetarian restaurant in Hue, Lien Hoa, which attracts both locals and tourists with a big menu that ranged from meatless fried spring rolls to vegetarian hot pots. The policy against killing animals seems to extend to visiting rats, which seems to be tolerated by the locals, but upsetting to some Western guests. (Profits go to charity, something I didn’t know when we visited.)
The variety of food in Vietnam, especially street food, is amazing. There are plenty of the kinds of restaurants that Westerners are most familiar with – the kind with tables and chairs and a big menu of specialties, usually listed in English and Vietnamese – especially in tourist hotspots like Hoi An or Phu Quoc – but I rarely saw any Vietnamese customers in these places.
The locals were more likely to flock to the instant sidewalk restaurants that clustered at street corners in Hanoi, Hue and Ho Chi Minh City (Saigon). These often consisted of little more than a handful of foot-high molded plastic stools, a flimsy table of similar height, a cookpot, a few bowls and a little charcoal brazier – an entire business that can be packed up nightly into two hanging baskets and carried away.
Most of these specialize in a single dish – pho or bun bo (beef with noodles and herbs, often eaten for breakfast) in Hanoi, bun bo Hue in Hue, or simply grilled corn. In Ho Chi Minh City and the south, one of the most popular dishes is banh xeo, a big, thin yellow pancake stuffed with pork, shrimp and beansprouts, fried crisp and served with lettuce. On the train from Hue to Hoi Anh, a woman came on board at a stop en route, selling banh bot loc, little dumplings wrapped in banana leaves, filled with crunchy baby shrimp and tiny bits of barbecued pork, encased in a very chewy translucent tapioca dough. (Locally, I have seen these occasionally at Hoang Thien Y.) There were a few dishes I had never seen before – regional specialties in Hoi An like lau cau (pork with noodles, made with water from a special well), and banh bao vac (white rose) a delicate wonton-like steamed dumpling filled with shrimp.
One of the gastronomic highlights of our trip was the Quan An Ngon restaurant in Hanoi, set up as an open-air courtyard surrounded by food stalls, each specializing in different regional dishes from all parts of Vietnam. We ordered a big variety of dishes, ranging from banh tom (shrimp fritters) to nem (fried springrolls) and fresh papaya salad with cilantro and chopped peanuts.Popular with locals as well as tourists.
The grand finale to our Vietnam adventure came on our last night in Ho Chi Minh City, when we signed up for a Saigon After Dark tour from Vietnam Vespa Adventures that took us to neighborhoods and restaurants that seem to be off the most popular tourist trails. The food was great – we stopped at a seafood restaurant and dined on fresh crab, clams, snails and frogs, and then at a restaurant specializing in banh xeo (those big yellow pancakes), and charcoal grilled beef – both of which we rolled up in fresh greens and rice paper.
The stops afterwards at a couple of bars were fun, too, but the big thrill of the evening was the ride, on the backs of vintage Vespas. Even crossing a street in Hanoi or Saigon is an adventure – the traffic is a torrent of fast-motor bikes, and crossing a street is an act of faith. Mostly, the bikes are all moving the same direction, but not always, and sidewalks aren’t completely off limits either. The old pros says that the trick is to step of the curb and walk slowly and deliberately into the traffic. Miraculously, the river parts as you move forward, and the traffic flows around you. Experiencing this same flow on the back of a bike, zipping at top speed through the swarm, with bikes inches away, left, right, front and back, is great fun, but not for the faint of heart, or stomach.