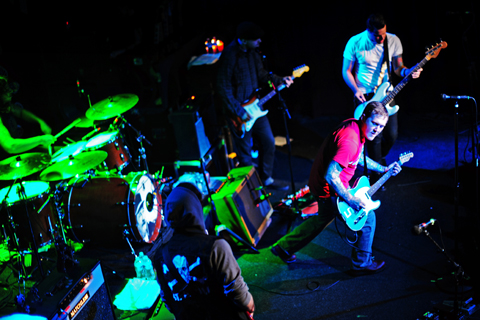 My wife and I have been waiting to see The Gaslight Anthem for years. We’ve listened to their three full-lengths more times than I can count. I’ve lost hours—maybe days—of my life watching clips of their concerts on YouTube. I’ve read reviews of their shows in Chicago, New York City, and Seattle with such jealousy, because I, frequent concertgoer, have never been in the same city as them at any point in the last five years. But at the Fine Line Music Café on June 11, I finally saw them, and the show was almost perfect.

About quarter to 10 their banner went up and the five of them, lead by Good Guy Brian Fallon, sauntered on stage to Fugazi’s “Waiting Room,” the crowd already arms-up and dancing, chanting along with the house PA, “I am a patient boy / I wait, I wait, I wait, I wait.”

The band’s known for their punk roots and the increased incorporation of the Jersey Shore sound as they’ve matured, blending its rhythm and blues and doo-wop into powerful three minute rock songs. If Bruce Springsteen instead grew up on The Replacements and The Descendents he might have formed The Gaslight Anthem.

The night before I saw them, Gaslight’s bus broke down in South Dakota, stranding them on rig that couldn’t be fixed until 10:30 the next morning. The damage endangered the Minneapolis show. Guitarist/singer and undisputed face of the band Brian Fallon said of the situation, “So we did what any rock stars would do—we took a bunch of drugs and slept through it…No! We’re not like other rock bands. We got up at 5:30 the next morning and caught a flight here!” The crowd went wild, Fallon’s face nearly cracked in half with the wide smile that didn’t leave him the rest of the night.

I said the show was almost perfect because the beginning of their set underwhelmed me. Though I didn’t yet know about the broken bus, they seemed tired. They seemed to only trace outlines of their opening volley—“Great Expecations,” “American Slang,” and “45,” the respective opening tracks from 59 Sound, American Slang, and their new album due July 24th, Handwritten. Perhaps it wasn’t the early morning and the previous night’s frustrations. The Fine Line gave them a terrible mix, drowning out the guitars and vocals with drums and the bass’ crunchy mids. (Note: I walked to the back, then upstairs to see if the acoustics just didn’t favor those of us on the floor. Nope, the mixer had drowned out the hooks for all of us.)

Though the poor EQ was impossible to ignore, it seemed to do little for the crowd’s enthusiasm—the humid air was filled with their fists and a soaring collective voice, one of the loudest I’ve ever heard for a concert that size.

By the sixth song, “Casanova Baby!,” the sound had been fixed and The Gaslight Anthem appeared free of whatever ailed them. From there they tore through the night, leaning heavily on their second and breakthrough full length, ’59 Sound, playing nine of its thirteen tracks.

Three of the set’s high points: “Ida Called You Woody, Joe,” a punk sing-along ode to The Clash’s Joe Strummer; “The Diamond Church Street Choir,” the farthest they’ve taken the R&B from their Jersey influences that pushed Fallon’s vocals unlike any other Gaslight track; and “Film Noir,” a fan favorite track about a tragic modern romance with line everyone seemed to relate to, like: “I’ve lost so much blood in the falling out / And I lit a fire that wouldn’t go out / Until it consumed the walls and roof of this house / Until all I remember was burning away / And all I remember you burned it away.”

Fallon told us often and profusely how thankful he was for such an enthusiastic fan base. With evermore Springsteen comparisons in recent years, Fallon’s actually made it on stage with the E-Street Band and Bruce has lent a hand to Gaslight. My mother and others of her generation have watched and rewatched those clips on YouTube. “He’s so cute,” she’s said of Fallon.

Tracks from ’59 Sound take significant space on my mother’s workout playlist and that album camps in her Jetta’s CD changer. The crowd that night at Fine Line was salt and peppered with similar minded elders caught in that East Coast riptide.

The comparisons are deserved. Fallon and The Gaslight Anthem live up to their world-famous Jersey peers. They’re grateful for their fans and work out their neck tendons with each verse, bridge, and chorus of their big rockers just like the Boss.

The only downside of Gaslight’s earnestness came on the devastating “Here’s Looking At You Kid.” Fallon, so enamored and thankful for the sold out crowd of Gaslight loyalists, fought a losing battle against his smile, almost beaming through lines like, “When we were kids on the field of the first day of school / I would’ve been her fool / And I would’ve sang out your name in those old high school halls / You tell that to Gayle, if she calls.”
But minor emotional transgressions aside, it was how Gaslight left us that framed so well the reason they had such a devoted fan base.

You see, encores used to be rare treats for audiences, not the required send offs comprised of a band’s hits seen today. Bands once played B-sides and covers off the cuff as thanks for an energetic audience.

For Gaslight’s encore they’d only saved one hit—their massive “’59 Sound.” The other six they played included expected cuts like Dylan’s “Changing of the Guards,” the American traditional “House of the Rising Sun” popularized by the Animals, and the new “Here Comes My Man” from their upcoming album. We were on our heels rather than parsing through our mental lists of obvious songs to come. It’s a pure and old school approach I appreciated.

The Gaslight Anthem closed with the rarely played live “We’re Getting a Divorce, You Keep the Diner.” The entire show they’d preached and showed us the ethic of the hardest working band in show business, which made even more powerful the last line of “We’re Getting a Divorce…” as it faded into night’s ether, “It’s alright man, I’m only bleeding man, stay hungry, stay free, and do the best that you can.”