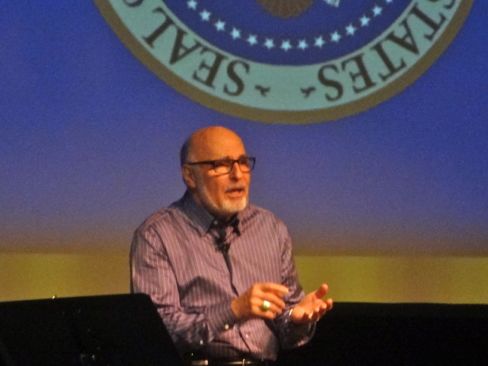 Stop me if you have heard this one:

“A priest and a rabbi are sitting on a plane, and the priest turns to the rabbi and asks…”

Sorry to disappoint you, but I’m not going to give away my old friend Gary Gilson’s punchlines. Gilson, a well-known local broadcast journalist, television producer and journalism teacher, added another job to his résumé last Sunday, when he launched his career as a storyteller and comedian in front of a sold-out crowd at the Jewish Community Center Sabes Theater in St. Louis Park with his show You Don’t Have to Be Jewish, But It Couldn’t Hurt.

And even if you have heard that joke before (some of his jokes were classics) before, you probably haven’t heard it told the way Gilson tells it. Gilson has great comic timing, but he does more than tell jokes. Over the course of the show, Gilson strung together poignant families stories, entertaining anecdotes about his encounters with Hollywood and Broadway show biz celebrities, and even a few basic Yiddish lessons. Gilson comes across as not just a very funny guy but also a real mensch—one of the words he defines in his Yiddish lesson. The musical accompaniment by pianist Phil Aaron and saxophone/clarinet player Dale Mendenhall hit just the right notes, evoking the sounds and the mood of bygone eras.