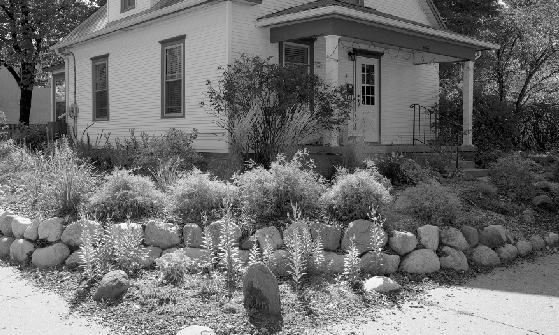 Todd Larson and Macy Ashby purchased their home in 2008, and one of the first things they did was replace their furnace, putting in geothermal wells – imagine getting rid of the old octopus furnace, then paying only $10 a month in summer for air conditioning – worth it, they say.

But the east side of their property (686 24th Ave. NE) along Howard Street took a beating between truck parking and the digging. “Grass is a lot to maintain,” so with the help of landscape architect friend Larry Opelt, they devised a three-year plan “which had about a 1.5 year execution,” Larson said.

Read more about how the yard project really started, and what’s next, [here].

Their neighborhood group, Holland Neighborhood Improvement Association, teams with Metro Blooms, which awarded Larson and Ashby both the Community Investment Award and the Nate Siegel, their highest honor, at an event Nov. 6.

Metro Blooms provides training and subsidizes materials to install rain gardens to hold water on site. For Holland’s projects, they also helped recruit volunteers, some coming from the University of Minnesota’s School of Design and the Conservation Corps of Minnesota.

“We had a couple rain barrels,” Ashby said; they fill up fast, “our rain garden works really well. The soil around here is sandy,” and they added compost to help hold water as well as provide nourishment for the plants.

A previous owner had constructed a low retaining wall of brick pavers that the new owners re-purposed elsewhere in the yard. Field stones 12 to 18 inches roughly in diameter, 14 tons of rock, replace that function. “We wanted things we could move ourselves,” Larson said. At the beginning, they used a lot of the free wood chip mulch from city parks betwee plants; the need for it is going down along with the supply dwindling.

“We had some really strange mushrooms growing on that mulch,” Ashby said.

As well as the organized installation day, the project took at least one weekend day a week plus a couple hours after work each day during that first summer.

The materials are many but not all natives. “We have lots of sedums and grasses, lots of Karl Foerster (grass),” Larson said, “And lots of lilies,” Ashby chimed in “there was a parking lot re-do and we filled the car” with what they were giving away. Liatris and hostas are in the side yard where there’s not much sun, and roses on the front hill. “We have some blueberries,” Ashby said, “but they are not thriving yet.”

Larson said in the “only sunny spot in the yard,” vegetables grow, started from seeds in March or April indoors. Both working jobs in education – Ashby as a teacher and Larson managing construction projects – they find late summer and fall to be their busiest time, so they “are getting better at” timing the potatoes, lettuce, peas, beans and squash to be eaten as they ripen, “we haven’t had time to can, since the first year.”

The project started in 2010, this past summer was the yard’s fourth. After putting in the rain garden, Ashby said, “Todd went door to door with Metro Blooms” as well as, over the years, doing a presentation at Edison High School and holding a couple of meetings at the house, encouraging people to look into rain gardens. The number who followed through, 27, impressed the judges, hence the Nate Siegel award, named for the Metro Blooms board member who founded the Blooming Boulevards program. 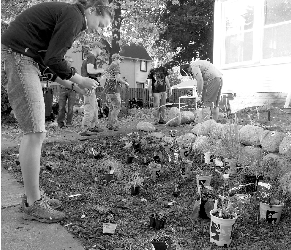 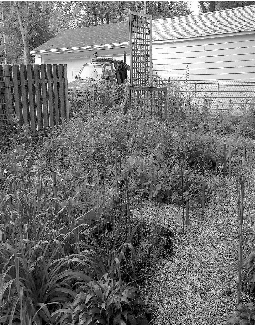 Squirrels are the challenge in the vegetable garden, and timing the produce to eat it as it ripens. The flower gardens of this maturity and selection shouldn’t need much tending or watering. Macy Ashby said she fills in spaces by splitting plants.

His award is given “to great gardeners who have inspired others, led by example, and in so doing, are making a difference in the health and beauty of our communities’ landscapes,” according to a Metro Blooms news release. There were a total of 12 different types of awards given. More information is at www.metroblooms.org.

“It’s a neat program,” Ashby said of Metro Blooms, in particular the rain garden program. “It’s so accessible — If you can use a shovel you can do a rain garden.” She’s impressed with the accessibility of gardening in general – “It’s labor, but it’s not difficult. If a plant doesn’t do well, move it.”

Ashby said they get a lot of comments when they’re out working in the garden – people engage in conversation. “It puts us out on the public side of the house.” 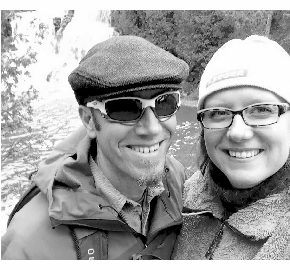 Their example may also have had something to do with three rental properties in their area turning to owner-occupants in the last couple of years. “A lot of people own, in this area, there’s not a lot of rental,” they commented, listing out others who’ve bought in or are doing gardens. “It’s a mix of ages, younger than when we moved in.”

The couple met in Denver, Colorado where she grew up; he’s from here originally. Larson’s family “always did stuff in the yard.” They rented in South Minneapolis for a while and “enjoy living in Northeast. There’s cool food and lots of beer now, events like Art-A-Whirl,” they said.

Larson and Ashby will turn their attention to some painting and other cosmetic projects inside the 110-year-old home this winter.