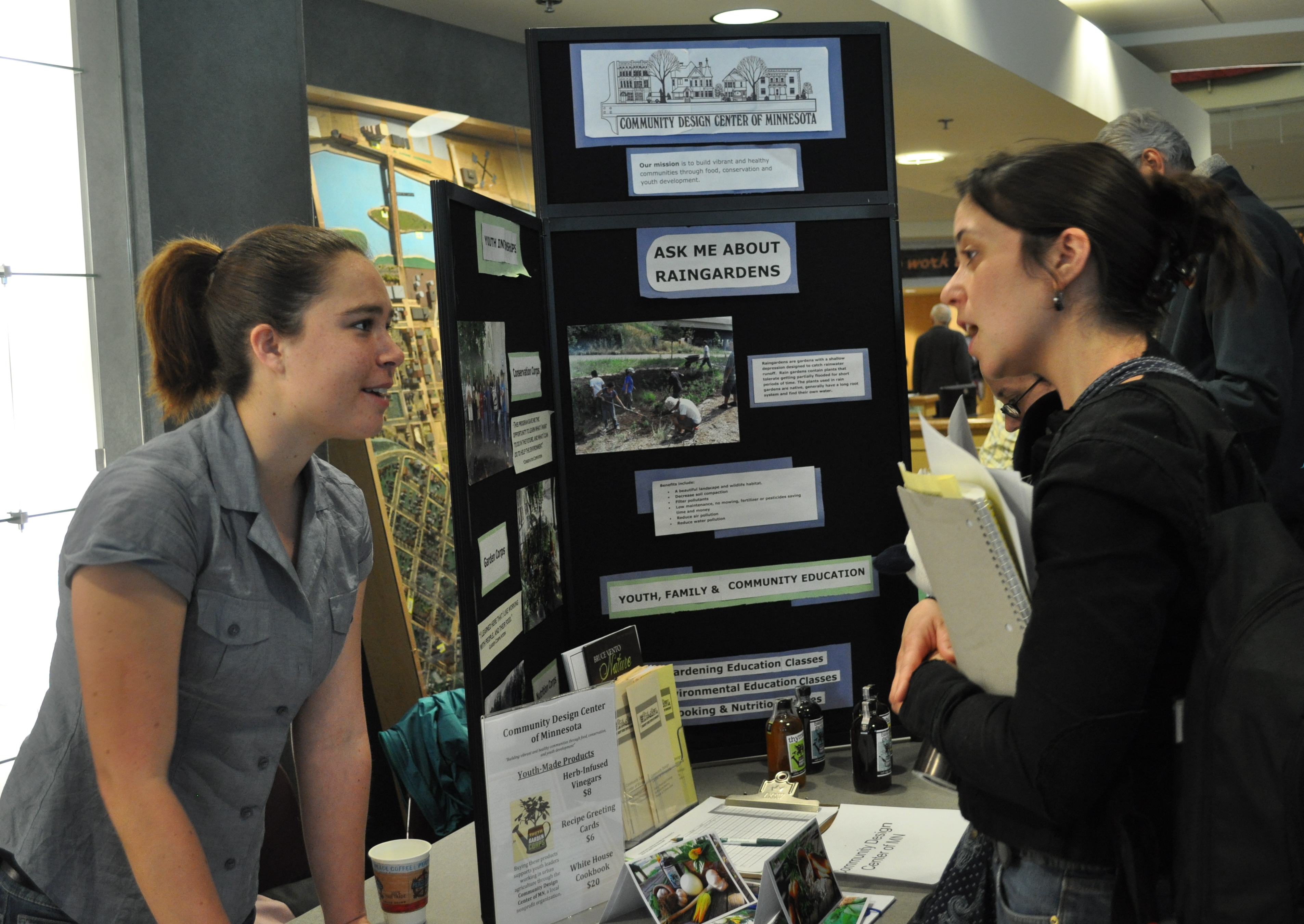 Liz Foster of the Community Design Center of Minnesota explains the program's youth internshipopportunities to an interested Resource Fair goer.

UPDATED 4/5/2012 (see note at end of article) – Urban farming and community gardening, once thought of as passing fads, have now become a large national movement addressing the health and vitality of citizens and neighborhoods. The Twin Cities continues to see increasing numbers of young and old picking up shovels and playing a role in the local food system. According to Saint Paul’s Arts and Gardens Coordinator Mark Granlund, in 2011, the city of Saint Paul documented 400 volunteers who gave 4,000 gardening hours to operate 40 vegetable gardens and 70 community gardens.

Community gardening in the Twin Cities is moving to a new level, according to Margaret Shields, Gardening Matters Education and Outreach Coordinator. “In past years, gardeners were self-organizing and still learning what to do.” Shields said. “Now we are seeing people mature as gardeners and we are paying attention to what did and didn’t work in past projects to promote sustainability.”

This year, more than 200 registered and over 400 attended the day, which included a keynote speech from New York City Community Garden Coalition (NYCCGC) President Karen Washington, a panel discussion on the status of gardens in the Twin Cities, a wide variety of workshops, local exhibits, networking, and Aztec dances that encouraged shared learning and increased connections to support community gardens in the metro area.

Chris Vanecek, Gardening Matters board member, echoed Shields, “Sustaining all of the previous work, energy, time and community groundwork in the local community gardens is the main focus of this year.”

As Gardening Matters enters its second year of running Local Food Resource Hubs, which supported more than 600 members and distributed more than 13,000 seed packets and 15,000 seedings in 2011,  they now are looking toward  making the movement’s momentum last.

During the keynote address, Washington spoke on the barriers New York City’s community gardens face on their journeys toward sustainability. Like NYC, Twin Cities’ community gardeners experience the inability to access land and navigate through restrictive ordinances that inhibit effective, long-term farming practices.

Washington revealed that through the creation of 700 community gardens, NYCCGC sprouted the city’s largest beautification project, and still found herself and other gardeners fighting the city to keep the gardens from developers.

“Land and land access is political.” Washington continued, “The land of milk and honey has become the land of greed and money.”

Through losing developed gardens in the middle of the night to housing construction companies, Washington realized that she and other activists were able to take back the land by fighting City Hall with many voices. “A lone voice is weak,” Washington went on, “The power of the people is in the power of the vote.”