If you have been a part of education in the United States at all, you are no doubt familiar with the “achievement gap,” the disparity in educational achievement attained between white and minority students. This is generally demonstrated with test scores and graduation rates, and pushes to even out these numbers have been endlessly debated and implemented, to mixed success. 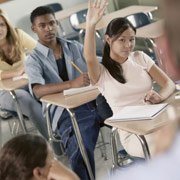 However, the persistence of this gap tells us much more about us as a society than it does about students. This reality is highlighted in a new study from Georgetown University that examined where students enrolling in post-secondary education actually went. The disparity between races, even in this group, shows how this gap is cultural, and can only be addressed if all sectors of society are on board.

To be clear, this study looked at students that were entering post-secondary education only. These are the success stories, the students that have navigated high school, in some cases overcome long odds to simply reach this point. For most metrics, this is the stopping point, the point at which victory is declared and students are considered a success. If we could just get more minority students to this point, the traditional narrative goes, the achievement gap can be closed, and we’ll achieve equality.

However, the findings here show that simply getting students into higher education is not an answer in itself. Minority students are disproportionally attending schools outside of the selective, well-funded colleges and universities that provide the typical college experience and job benefits. Instead, these students are going to “open-access” two and four year colleges, schools with less prestige and name recognition. The impact on future earning is large, about $2 million over a career, and show a much more systemic problem than the “achievement gap” would lead one to believe.

The problem here is not an “achievement gap,” these students are achieving similar educational goals. The problem is an “equity gap” in the way these students are perceived, and the opportunities afforded to them. By going to schools outside of the 468 most selective, students are missing out on both prestige of degrees and connections in their job markets, both factors which are important, but not factors that any student can control. Barriers to college access, cost in particular, is not helping this problem, and little seems to be happening to really change that. Getting studetns to college is good, but it doesn’t show a real change in what and who we value. That change needs to come from all of us, not just students or teachers.