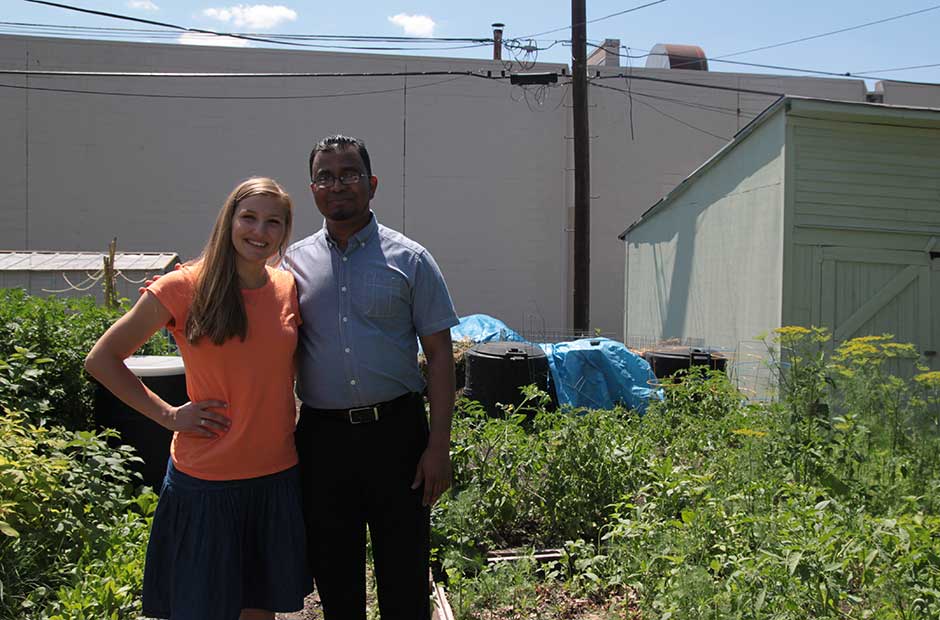 From left, Corrie Weikle and Ruhel Islam at one of the first garden sites at Minnehaha Avenue Community Garden.

Ruhel Islam, owner of Gandhi Mahal, has a big vision – developing a closed-loop food system for his restaurant, while at the same time tackling issues of food justice – paying farmers fair prices for their food, increasing food access, and ensuring food security.

With the help of like-minded people, Islam is well on his way. Last year, he started with two urban farm sites and grew 2,000 pounds of food. This year, he has 12 local sites – some large, some small – and is on track to harvest 10,000 pounds of food all within a two-mile radius of his restaurant. 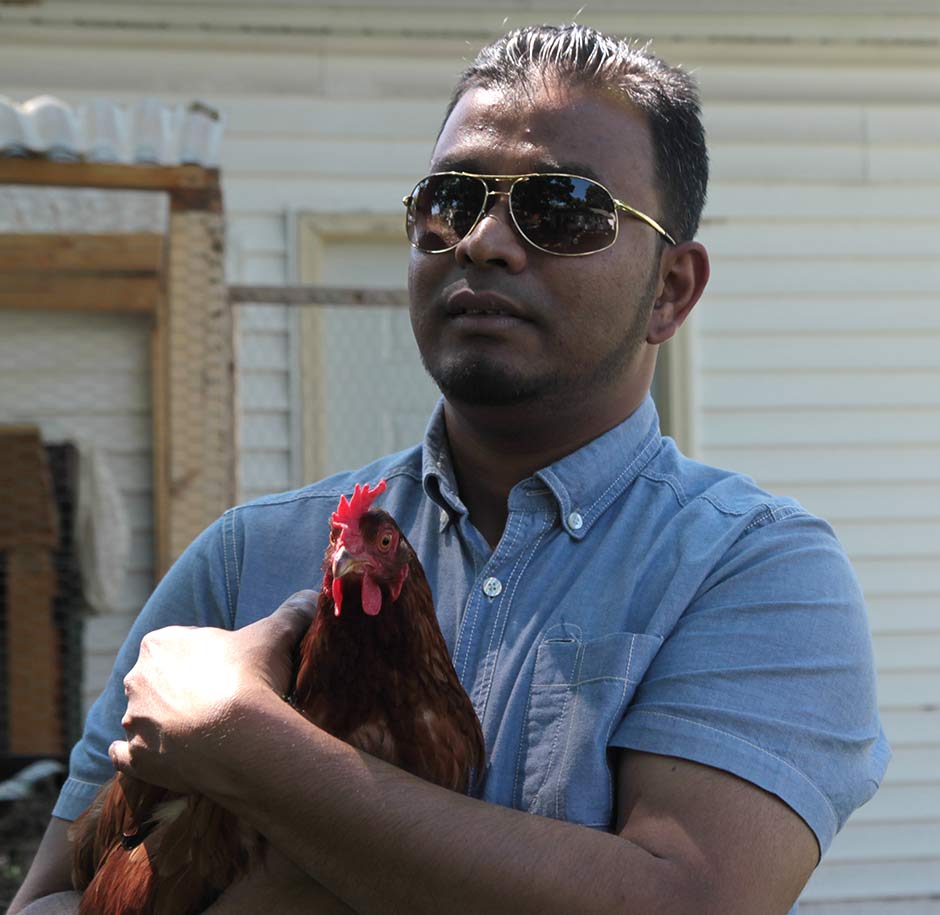 Islam with one of the chickens he raises at his home garden.

Gardening and cooking has always been a natural fit for Islam, who learned to cook from his mother and grandmother in his home country of Bangladesh. He explained that when he moved to Minneapolis, owning a restaurant and farming had always been a part of his American dream.

So it makes sense that while he’s celebrating the fifth anniversary of his restaurant, he’s also launching a Kickstarter with HECUA (Higher Education Consortium for Urban Affairs) to develop a sustainable farm-to-restaurant model with a strong emphasis on food justice.

Islam had been aware of the issues related to the conventional food system in the U.S., but it wasn’t until a trip to Bangladesh that he was moved to take action. He saw first hand how our current food model affects people in other countries. While traveling, he met up with Julia Nerbonne of St. Paul-based HECUA, and the two began to develop a plan for how they would implement what they had learned in Bangladesh in the Twin Cities.

Working with Nerbonne as well as Michael Chaney of Project Sweetie Pie, Islam began to develop plans for a new way to supply his restaurant with fresh food. 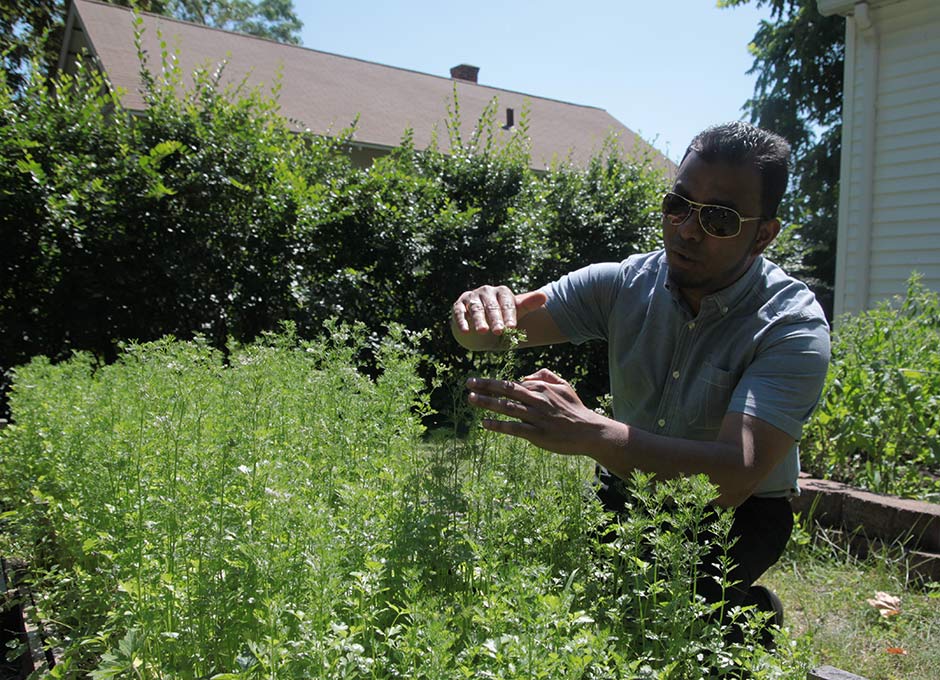 Islam next to a large bed of cilantro in his front yard garden. He describes how he harvests the cilantro by picking off leaves from the side of the plant, letting the plant go to seed. Later, he harvests the seeds (coriander) and uses the spice in his dishes.

Developing a completely new model for sourcing restaurant food takes a considerable number of people. HECUA students who want to learn about sustainable food systems work as interns for the project; local urban farmers have offered up their land for production; volunteers help with watering, weeding, and planting; and Farm-to-Restaurant Manager Corrie Weikle coordinates it all.

As word of the project has spread, more and more people want to join in on the effort. “We’ve had an overwhelming response from community, and I have lists of people that want us to grow on their property,” said Weikle. “People contact me everyday saying they’d love to volunteer and ask, ‘what can I do?’” 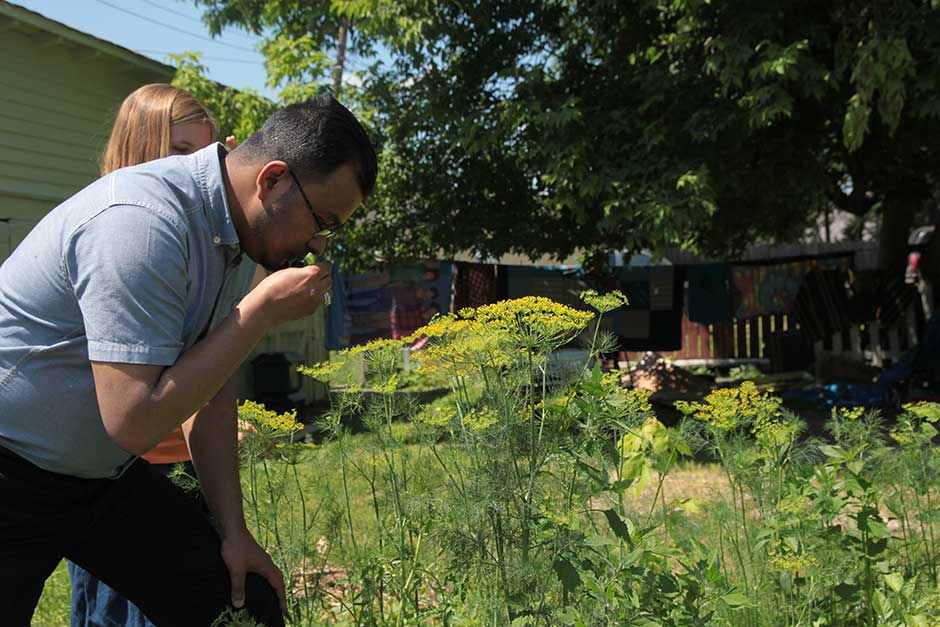 Islam and Weikle check out the dill growing in their plot at the Minnehaha Avenue Community Garden.

There are several components to the project that the group wants to tackle head on, creating a well-marked path for others to follow. Weikle explained, “What we want to do is have a template document that says this is what you need to do to be successful, these are the barriers we ran into, and this is how you can do it.”

The first issue is basic logistics. How do you provide farmers with the materials that they need, including plants, compost, tools, and training? How do you transport the produce to the restaurant? Finally, how do you store food and preserve it for use in the winter?

The second is much more ambitious – to create a just food system and connect people with their food. Islam has provided the farmers with all of the supplies needed to grow the produce and has agreed to buy every pound of food grown in the gardens – creating a direct market for the farmers.

The HECUA students that are involved in the project also get to learn more about growing and managing food systems.”[Islam] is trying to grow educated young people that enjoy their food and that are connected to their food…to create a system that works and that is just,” explained Weikle. She added, “Our system is 100% about education and teaching people how to do this.”

This Thursday (7/11), Gandhi Mahal and HECUA will launch a Kickstarter campaign designed to further develop the farm-to-restaurant project. They plan to use the funds to purchase rickshaws so that produce can be transported from the farms to the restaurant without any CO2 emissions and purchase freezers to store the food. They also plan to use the funds to support classes on building chicken coops, canning food, and creating farm-to-table systems.

The Kickstarter Kick-off Party will be held at Gandhi Mahal on Thursday from 5-9 p.m. Enjoy a buffet dinner, bike tour of the farms, and mural painting. Activities for kids are also planned.