The smell of cheap hot dogs and popcorn. The squeak of sneakers on the laminated gym floor. The stands, filled with spectators and supporters, cheering every back and forth point like it’s do or die.

High school sports make up a significant part of many students’ lives, not to mention the coaches and administrators who give time and attention to each individual athlete.

Yet as high school athletes are becoming an increasingly popular media species, are prep sports still played the way they should be played?

Dennis Stockmo, athletic director at Roosevelt High School, said high school sports are meant to teach students life lessons, whether they know their value at the time or not. Adults should teach them how to “play hard and act like young men and women,” he said—which is easier said than done when winning and scholarships are on the line.

In September, Matt Labrum, a football coach at Union High School in Roosevelt, Utah, suspended his team of 80 players due to poor academic behavior. After finding out that some players had been skipping classes and cyberbullying classmates, Labrum required his athletes to return their jerseys and equipment until they “earned the privilege to play.”

Although it may have seemed like an extreme punishment—and a bit of a rarity to suspend an entire team—none of the student athletes fought Labrum on his actions.

“We looked at it as a chance to say, ‘Hey, we need to focus on some other things that are more important than winning a football game,’” Labrum told a Utah newspaper. “We got an emotional response from the boys. I think it really meant something to them, which was nice to see that it does mean something.”

Closer to home, the Minnesota State High School League is the center of judgment for high school sports. The league’s governing body decides the main rules for each sport, how to staff big tournaments throughout the year and establishes a code of conduct that guides how sports should be played in the state.

Although the MSHSL decides on general rules, coaches still get to decide the consequences for their individual teams. Athletic directors and coaches maintain a lot of control, Stockmo said, and can add more rules or punishments as they see fit. At Roosevelt, there has been consideration for a school-wide code of conduct, but so far, there is only a rule sheet for a student’s specific sport to sign.

Stockmo said the influence of today’s professional sports culture on high school students should not be understated. Because “society views sports in the wrong way,” it can create headaches for administrators who try to offer perspective or guidance.

High school athletes “sometimes see the cars and the money and the houses, and they don’t see the sport itself,” Stockmo said. 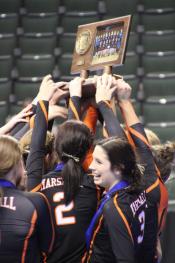 John Millea, a media specialist at MSHSL, believes that Minnesota high school sports can be a “model for the rest of the country.”

Driving across the state for games, big and small, has opened Millea’s eyes to the connective tissue provided by high school sports in various communities. Although venue size may be different as you move further away from the Twin Cities, Millea said “the game is still the same.”

“We don’t ever talk about winning. We talk about fairness, sportsmanship and overcoming obstacles. Learning teamwork,” said Millea, who writes a column called “John’s Journal” that acts as a spotlight for prep sports in Minnesota.

“And we’ve had different initiatives to stress these things over the years. It’s about growth. Student growth.”

Twenty years ago it would have been common to find one person from each local paper covering a game. Now bloggers, freelance reporters and national writers cover games and specific athletes, creating a storm of attention that often extends into social media and the front pages. ESPN even televises “Signing Day” press conferences at high schools.

It only serves to fuel the hunt for college scholarships and personal attention, Millea said.

“Just because you’re an athlete, why should you be at any higher level than somebody who’s on the debate team? Or somebody who just comes to school and does a great job, and isn’t out for activities?” he said.

A recent example, Millea said, is the national attention surrounding Tyus Jones, a senior basketball player at Apple Valley High School. Jones is ranked as the top point guard in the country by ESPN.

As an 8th grader, Jones snagged a spot as a varsity starter for Apple Valley and received his first scholarship offer from Iowa as a freshman. He also played for USA Basketball and attended separate skill camps hosted by NBA stars LeBron James and Chris Paul.

In November, Jones committed to Duke in a widely televised ceremony.

“It’s no fault of his that he’s put up on this pedestal, as this superstar high school kid … (but) it makes him different from any other student, just because his profile is so high,” Millea said.