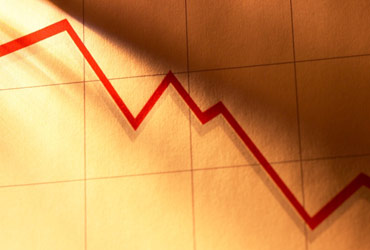 Minnesota may not be winning the so-called “race to the bottom” against other states, but we’re closing in on the heels of the frontrunners.

True, federal and state jobs data show Minnesota has restored most of the lost jobs from the 2008-2009 Great Recession. Over the long haul, that is just a sprint, or a relay leg, in what critics of federal and state economic policies call the “race to the bottom.”

Statistics show we haven’t recovered the great job losses of the earlier 2001-2002 recession or slowed the steady decline in economic well being over the entire past decade.

“We were a leading state, well above average in the 1990s,” said Kevin Ristau of the Jobs Now Coalition nonpartisan research group. “That all changed in the last decade.”

Jobs Now has taken a longer view of data from the U.S. Bureau of Labor Statistics and made these four troubling findings:

Longer looks at state and national economic performance data is in contrast to indices and reports released every week. All reflect changes in the economy and are useful. However, many of the data sets are simply short-term, monthly figures; they don’t reveal sustainable trends more than the daily rise or fall of the Dow Jones Industrial Average index.

This article is the first in an occasional series. It will look at different data that explains the softness of the current economic recovery. Future articles will explore how the weakened middle class job markets are holding back recovery in the depressed housing market, why we have increased poverty amidst an economic recovery, and why the gap between the “haves” and the “have-nots” in Minnesota, will widen without course corrections to public policy.

“Part of the tragedy of this ‘race to the bottom’ is that as we (Minnesota) race towards the bottom, the bottom itself keeps dropping,” said Peter Rachleff, labor historian at Macalester College.

“If they (states), like Texas, are gaining jobs, those jobs do not pay family-sustaining wages and benefits,” he added.

That is observed nationally on comparative looks at the shrinking middle class and related problems for housing and healthcare markets. The same trends, however, become especially evident in Minnesota where the Minnesota Department of Employment and Economic Development (DEED) began a thorough Job Vacancy Survey in 2001 that provides more information than can be found for most states More recent JVS can be found here.

Archived results from DEED show Minnesota job openings, or job opportunities for people in need of employment and who are seeking better employment, recovered last year to levels around the time of the Wall Street banking fiasco in 2008 and the accompanying Great Recession.

Ristau, at Jobs Now Coalition,points out that this isn’t much of a recovery. The JVS data for the second quarter and fourth quarters of 2011 still show less than half of the Minnesota job openings available in the second quarter of 2001, before the start of the earlier recession. (See graphic.) 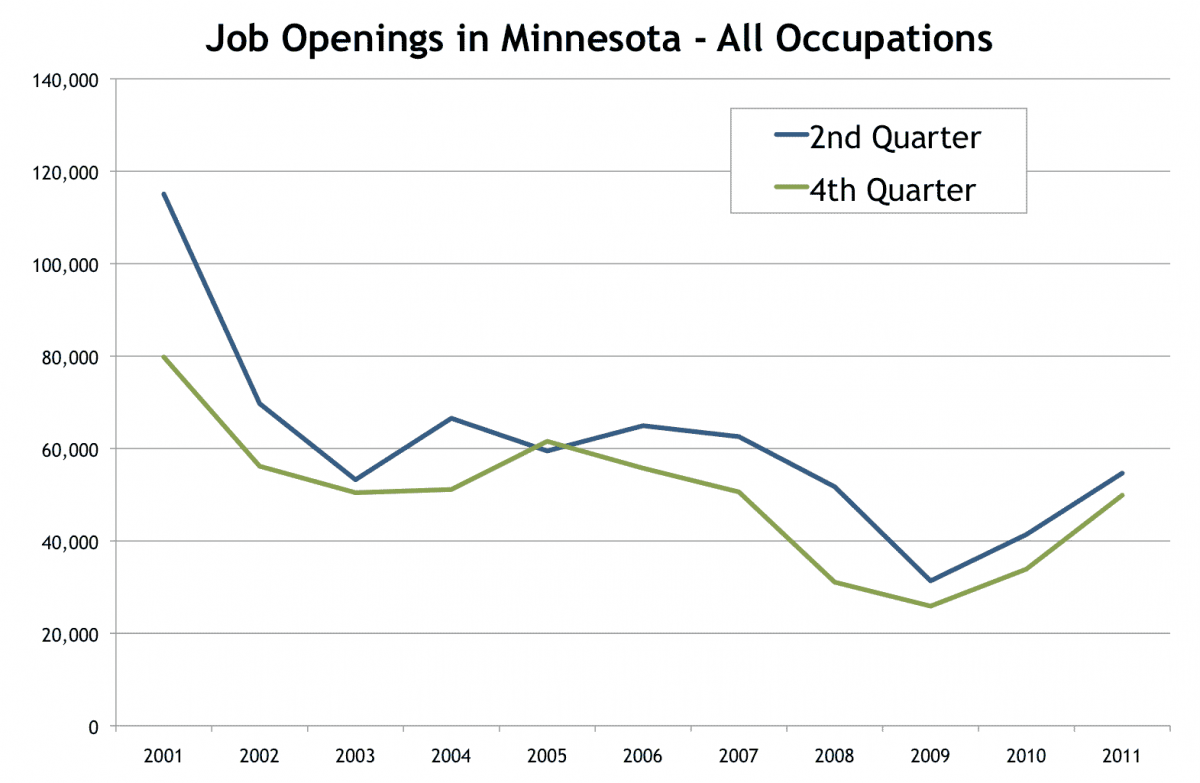 The JVS report shows job opportunities in a number of healthcare fields, education and training and various skilled business positions that are likely to offer better pay and family-sustaining benefits. Other categories that offer job opportunities, however, are in food preparation and serving positions, and in categories that include Minnesota’s large retail sector that isn’t known for offering benefits.

Unless we’re entering an economic stage where Minnesotans can sell each other imported goods, or work in support of people engaged in such transactions, we need to strengthen our “production” sector.

This sector shows even more weakness in Minnesota’s economy, observed Ristau. Minnesota had only 3,048 such job openings in the fourth quarter last year, or only about half of the 6,002 openings found in the first JVS survey a decade ago. 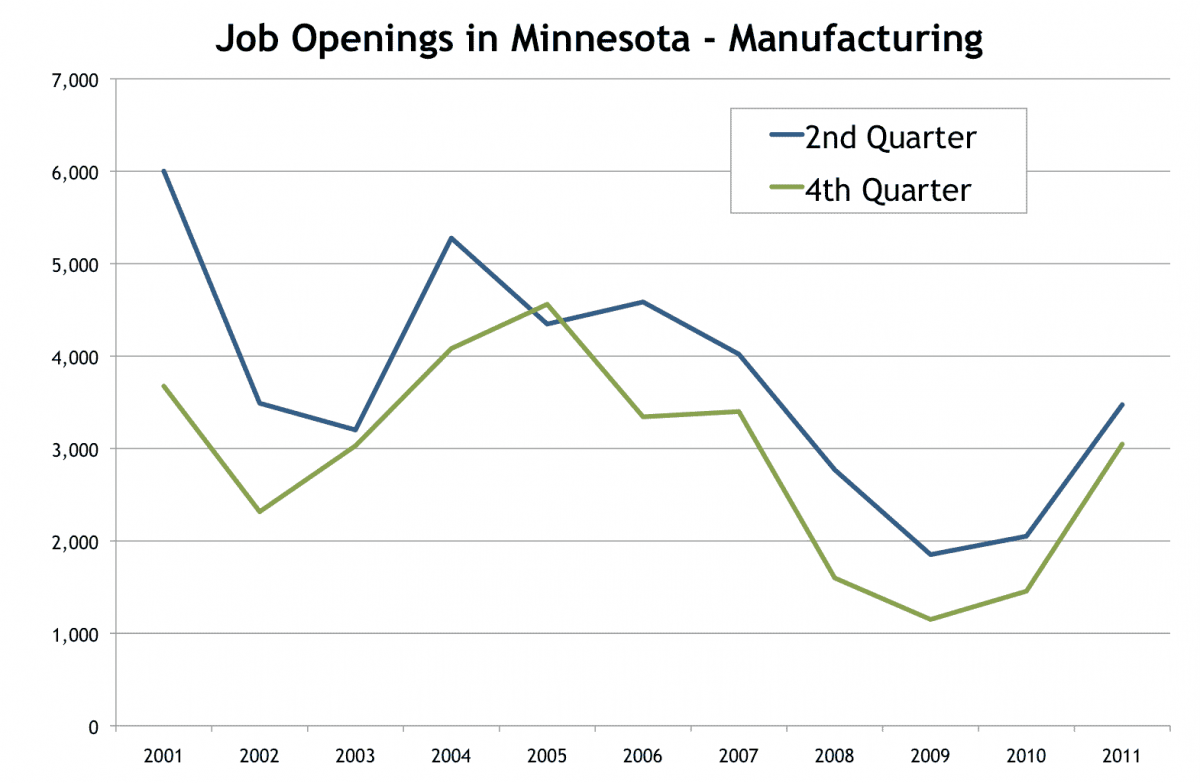 Coming out of the past decade’s first recession in 2002-2004, the ERS determined that 7.2 percent of Minnesota households were considered “food insecure,” of which 2.5 percent of households were called “very low food security” and were most likely missing meals.

During what were statistically economic recovery years of 2005-2007, but not for the lower and middle classes, the food insecure rate in Minnesota rose to 9.5 percent of which the very low food security households accounted for 3.7 percent.

Future articles will explore how such data influences lives and opportunities in Minnesota. One obvious conclusion can be drawn from just the data above:

People uncertain where their next meal is coming from are not likely to make mortgage payments or secure health insurance coverage for their families, creating economic consequences for all Minnesotans.