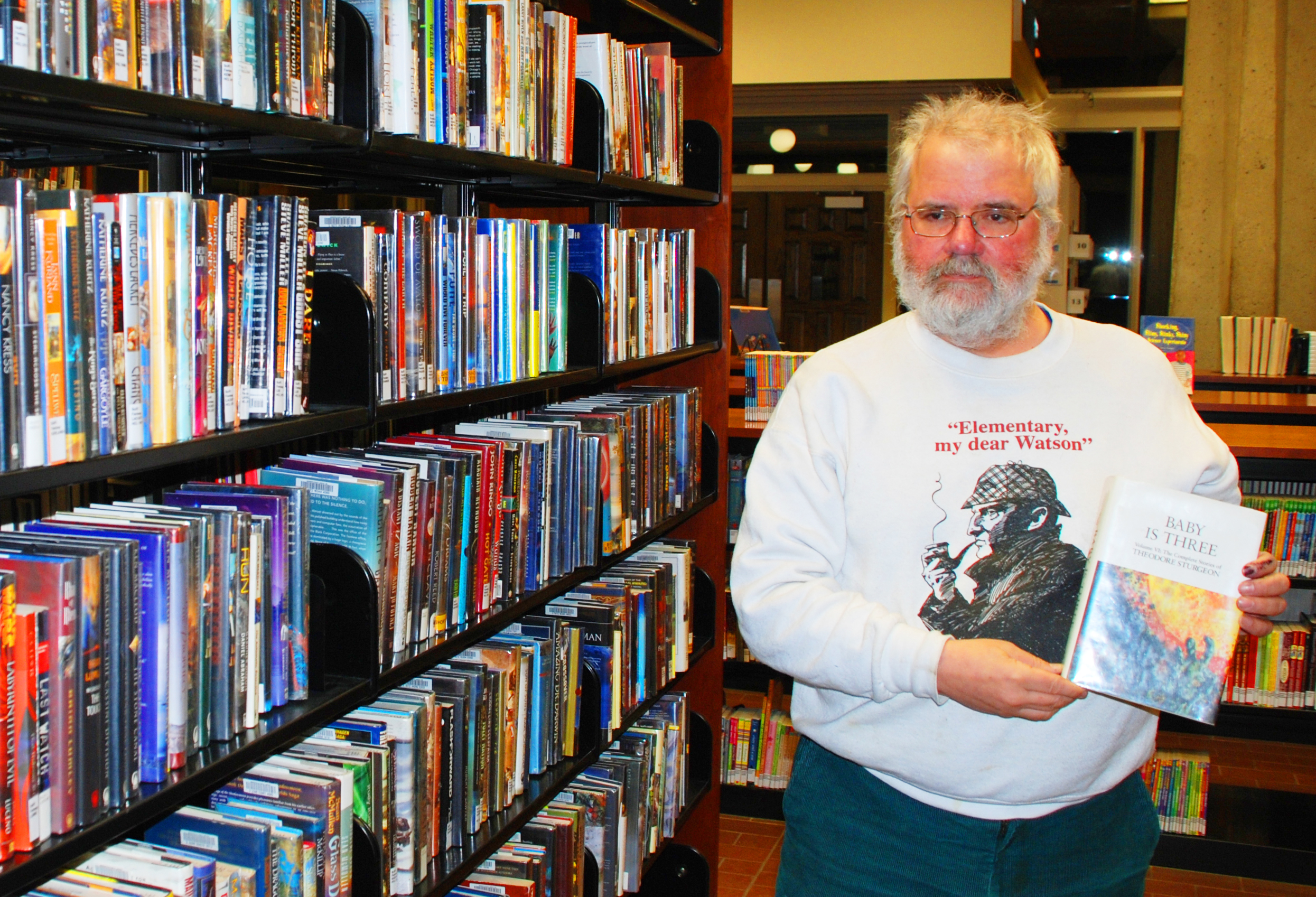 Eric Heideman with one of his favorite sci-fi books, a collection of stories by Theodore Sturgeon.

This is the final article in a six-part series about the future of the Southeast Library in Minneapolis. Previously, part 5: What does the community need today?

“University students use it a lot,” Heideman said. “It serves a very diverse group, including many different ethnic groups and cultures. There has been an increase in the number of parents with small children in recent years.”

Heideman, who began as a children’s librarian in 1998, became head librarian for the building in June 2001. He continues with weekly story time at 10:30 a.m. most Saturdays for families with children ages 2 and above. He also does story time and other programs scheduled to accommodate three or four elementary schools within walking distance.

Heideman takes pride in the science fiction collection—his personal favorite section. He edits an occasional anthology of science fiction and essays called Tales of the Unanticipated. Because of the library’s proximity to the University of Minnesota, he carries a collection of history, biography, and popular science.

Books, DVDs, and CDs from other libraries in the system can be paged for use and checking out at Southeast.

Heideman referred questions of the politics and priorities of the Southeast library to the Northeast Librarian. “I’m running a library,” he said. “That’s my job.”

The newly remodeled Northeast Library at 2200 Central Ave. N.E. reopened earlier this year. It is open five days a week and the librarian there strongly defends Southeast improvements.

“The Southeast Library gives both the neighborhoods and the University students a sense of community, a small town feel for those who want people to know them when they come to the big city,” said Northeast Librarian Laurie Simenson.

“Eric and the other librarians know some of the regulars by name. Some students who come there are not even going to Red Box once they realize the variety of offerings we have in books and other media.”

“I am a huge proponent of libraries,” Simenson said. “They are the greatest equalizers on the planet.”

Supporters of the Southeast Library can become involved without taking part in the site-selection process.

Kathleen Reilly, a resident of Marcy-Holmes, has begun organizing a group called Friends of the Southeast Library. Unlike the Minneapolis Public Library with a Friend of the Library organization for the entire system, Hennepin County has encouraged each community to develop a Friends group for its own library, Reilly said.

“This organization will follow the model of Friends groups for all libraries in Hennepin County, and will be coordinated through the Friends of the Hennepin County Libraries (HCL),” says a news release from the county. “Friends groups help to raise awareness of library services, support the library through book sales and other initiatives, and plan and volunteer for programs and events.”

“The Southeast Library building project, scheduled to begin in 2015 or 2016, is a separate issue, not related to the Friends,” the news release said. “The community engagement process for that project will begin in 2013. The building project process and timeline will be announced by the HCL administration during 2013.”

People interested in helping launch or joining Friends of Southeast Library can send an email to southeast@supporthclib.org, call 612-543-8105, or see http://www.supporthclib.org/group/southeast-library/.