All images from forum slideshow

Construction of the light rail transit and University of Minnesota expansion are rapidly changing the Stadium Village business district area just west of the campus.

“This area is going to be developed, and we need to be prepared,” Minneapolis city planner Haila Maze told about 100 neighborhood business owners, developers, residents and other stakeholders February 28 at the Grace University Lutheran Church.

She identified three main planning categories—market and development opportunities, parking and transportation, and public realm and connectivity—for the area that reaches from the Mississippi River on campus to St. Paul.

Planning for the future

Maze and planning consultants presented drafts of reports by the University of Minnesota and the Prospect Park neighborhood and studies by consultants Biko Associates and Stantec. The consultants identified planning issues and suggested recommendations that will be discussed in a series of public meetings over the next few months.

They discussed the value of having a comprehensive urban plan as opposed to having city officials approve individual developments one by one as they are proposed.

“Having a plan makes a difference,” Maze said. “For example, the Riverside Avenue repairs received the attention of the City Council when [they] did because the area had a plan,” which the council adopted.

“As we do site-by-site development, we should have a big picture in mind, considering social benefits, the flow of people, making an investment in the area and such things as storm water management.”

Construction will begin soon on the Stadium Village transit station on 23rd Avenue, the only one without an urban plan along the light-rail transit line being constructed between the downtowns of Minneapolis and St. Paul.

As planning principles are proposed, Maze said, the planning department will post them on its website and call additional public meetings for discussion of issues. 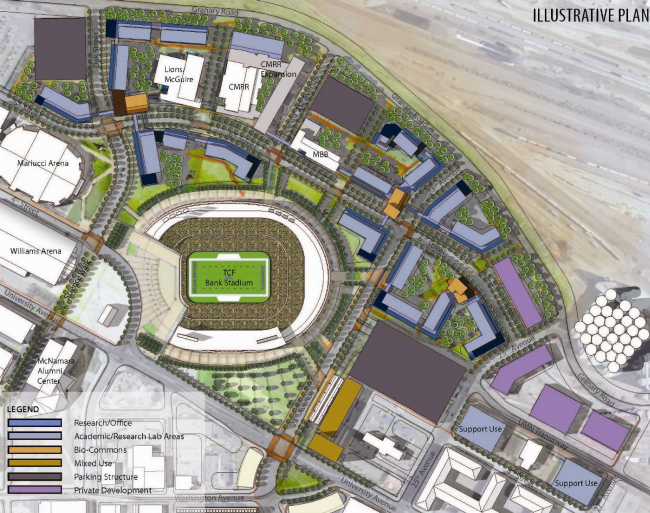 A U to grow on

Besides the LRT addition and the new TCF Bank Stadium for the Minnesota Gophers, the University of Minnesota campus is undergoing the largest expansion since it expanded across the river to the West Bank in the 1960s. New buildings north and east of the Stadium constitute a new biotechnology research corridor.

“Stadium Village is one of 18 new stations that make up the Central Corridor LRT that will link the downtowns of Minneapolis and St. Paul,” according to the consultant’s draft on public realm and connectivity.

“Ridership on the transit line is forecasted to be over 40,000 per weekday by 2030. This significant infrastructure improvement will profoundly impact development potential in the Stadium Village station for years to come,” the report said.

Maze said the increased traffic could create a demand for almost twice as much retail space than is available in the area now, Maze said. About 70 percent of the current 100,000 square feet of retail consists of bars and restaurants. This space could sustain an additional 80,000 square feet by the year 2020, she said.

Because most of the retail depends upon pedestrian accessibility, she said, the plan should preserve key areas for retail growth, meaning the ground floor in the highest trafficked areas.

Key growth areas could be more restaurants, apparel stores, and electronics/communication retail stores. She also cited a demand for a grocery store as well. But she added that a grocery store for this market would be “tricky.”

“Grocery stores seem to come in one size: big,” Maze said. “And there isn’t a whole lot of space for a big store here.” 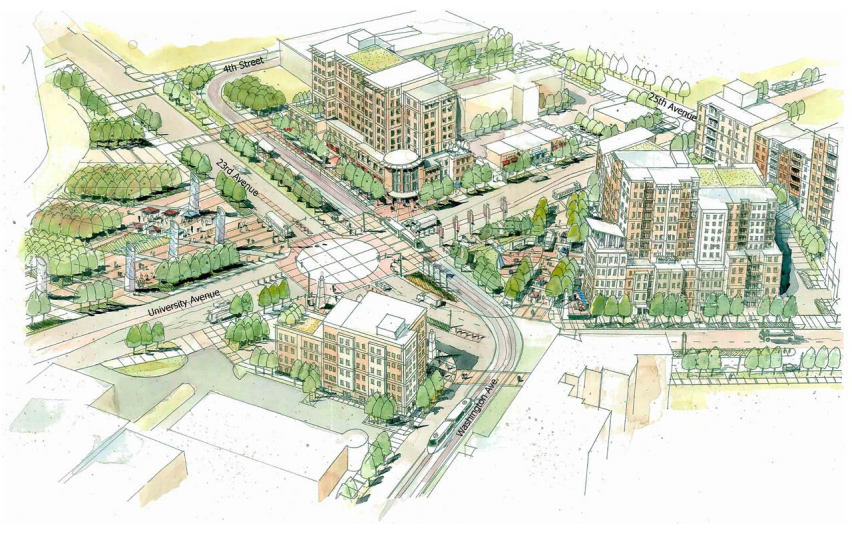 Some retailers and offices, Maze said, may capitalize on demand by operating one or two stops away from Stadium Village along the light rail.

LRT will have both positive and negative impacts on parking, Maze said, because it will eliminate 190 on-street parking places and 52 off-street spots. Both the stadium and Prospect Park lose 80 percent of the on-street parking.

At the same time, the LRT will reduce the number of daily auto trips by 1,830 by the year 2030. “The area already has high transit use and bike-fed ridership,” she said.

The changes will encourage public-private arrangements to handle parking needs and to accommodate increased traffic during major events, she said.

The number of housing units may increase, she said, but the market for office space may be saturated in the area. Some office development could serve local markets, such as lawyers, financial planners, dentists and chiropractors. Stronger office markets could be at nearby LRT stops at 29th Avenue, Westgate and Raymond.

Consultants have identified underused sites, including some along Huron, 27th and 25th avenues that could be used for more intensive development, she said.

New developments, Maze said, should be evaluated on whether they preserve the character of the University and Prospect Park neighborhoods, reinforce an urban pattern and provide a gateway to the University.

The student housing market is strong, and we do not yet see an end in site,” Maze said, adding that more than 250 housing units are under construction. “The city can’t decide what is student and what is non-student housing,” she said.

She said many housing issues have been addressed by the nearby Prospect Park neighborhood in its Prospect Park 2020 plan. This plan proposes intense high-rise development along Fourth Street Southeast east of the stadium.

Several participants, including developers, questioned the need for one parking space per apartment as zoning requires.

Consultant John D. Slack of Stantec said he has identified “hundreds of recommendations” that the neighborhood should address, especially in transportation.

Accommodating all kinds of traffic

Slack proposed a “hierarchy of intersection treatments” for improving the flow of all kinds of traffic, including improved signage and signals.

“There’s a lot of bicycle-pedestrian conflict,” Slack said. “There will be even more pressure when the LRT is up and running. Obviously, circulation patterns are going to be different.”

His recommendations for the public realm include an emphasis on the first-floor use for new buildings, activate activity on the street level, encourage developers to create friendly spaces, such as sidewalk tables and benches.

The city could offer incentives, such as density bonuses and extra height, in exchange for improvements in the public realm around new buildings, Slack said.

The city’s work on streets is limited because some major streets are state highways and others present physical challenges. Huron, for example, has three different widths within a few blocks. “We can encourage setbacks where rights of way are narrow,” Slack said.

These could create plazas to increase green space and to welcome pedestrians and bicyclists.

The planning drafts recommend an array of sidewalk and bike-path improvements, including “bicycle-friendly facilities, like good places to park your bike.”

Planners agreed on the need to improve bicycle flow and parking, including completion of a “missing link” in the Grand Rounds bicycle path system from the riverfront across the railroad yard to the bicycle trail in Northeast Minneapolis.

Planning north of the railroad yards is beyond the scope of this plan, Maze said, but the Stadium Village development should encourage bicycle traffic and allow for eventual completion of the Grand Rounds.

Under land use and development, the plan will provide market analysis, propose land use and zoning changes, identify historic resources, and suggest development opportunities.

The transportation plan will address parking, the LRT impacts, bicycle and pedestrian needs, and “connectivity” issues related to increased and more complex traffic in the area. 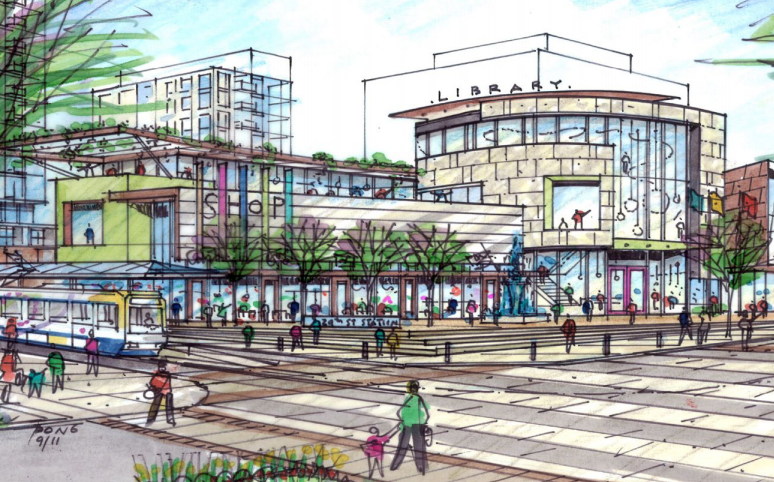 About 75 people attended the Feb. 28 presentation of the planning issues at 3 p.m., and about 20 people attended a repeat of the presentation at 5 p.m. The program was hosted by the University District Alliance, a planning group drawing from the Marcy-Holmes, Como, Prospect Park, and Cedar-Riverside neighborhoods along with city and University of Minnesota planners.

Maze’s slides from the February 28 meeting are available online as a PDF.

The “public realm and connectivity” framework proposes design principles and development incentives to improve the streets, public spaces and other infrastructure to encourage pedestrian and bicycle traffic in the area.

The city can provide incentives for developers to have business and other activity as well as public spaces on the street level of new buildings, Slack said.

“The design of the Public Realm must encourage diverse urban experiences and create a good and flexible environment for people to gather, congregate, and visit in order to reinforce the sense of community,” the draft states. “The design should also foster social and economic interactions, create an attractive destination with strong businesses, vibrant neighborhoods, and beautiful places; and result in streets that are safe, comfortable, and convenient for motorists, pedestrians, bicyclists, and transit users.”

Maze showed illustrations of possible new buildings, including high rises, at the intersections of Huron, Washington and University avenues. What’s happening now, she said, is that “we’re taking an intersection that’s already very complicated and adding a train to it.

Looking to the future

Dick Poppele and Dick Gilyard, who summarized the Prospect Park 2020 at the meetings, both said Stadium Village is “in the dead center of the Twin Cities metropolitan area.”

The land-use plan looks at how the neighborhood would like the area to develop, not just what is projected into the future, they said.

Gilyard called for high-density housing on the north side of Fourth Street from the Stadium to Malcolm Avenue, some of which could be for older residents. “We don’t say seniors any more; we say alumni,” he said.

Jim Widder, a Prospect Park resident and advocate of green architecture, said he worried that the city looks too much at the needs at big developers and has neglected those who have already been displaced by the LRT construction.

Past development has been more random, Maze said. “It’s like somebody took a handful of buildings and cast it out. We now need a pedestrian-friendly walk able area that’s urban, high quality and flexible.”

Maze said a plan could be adopted by the City Council after a draft is completed later this spring after additional meetings for public input.