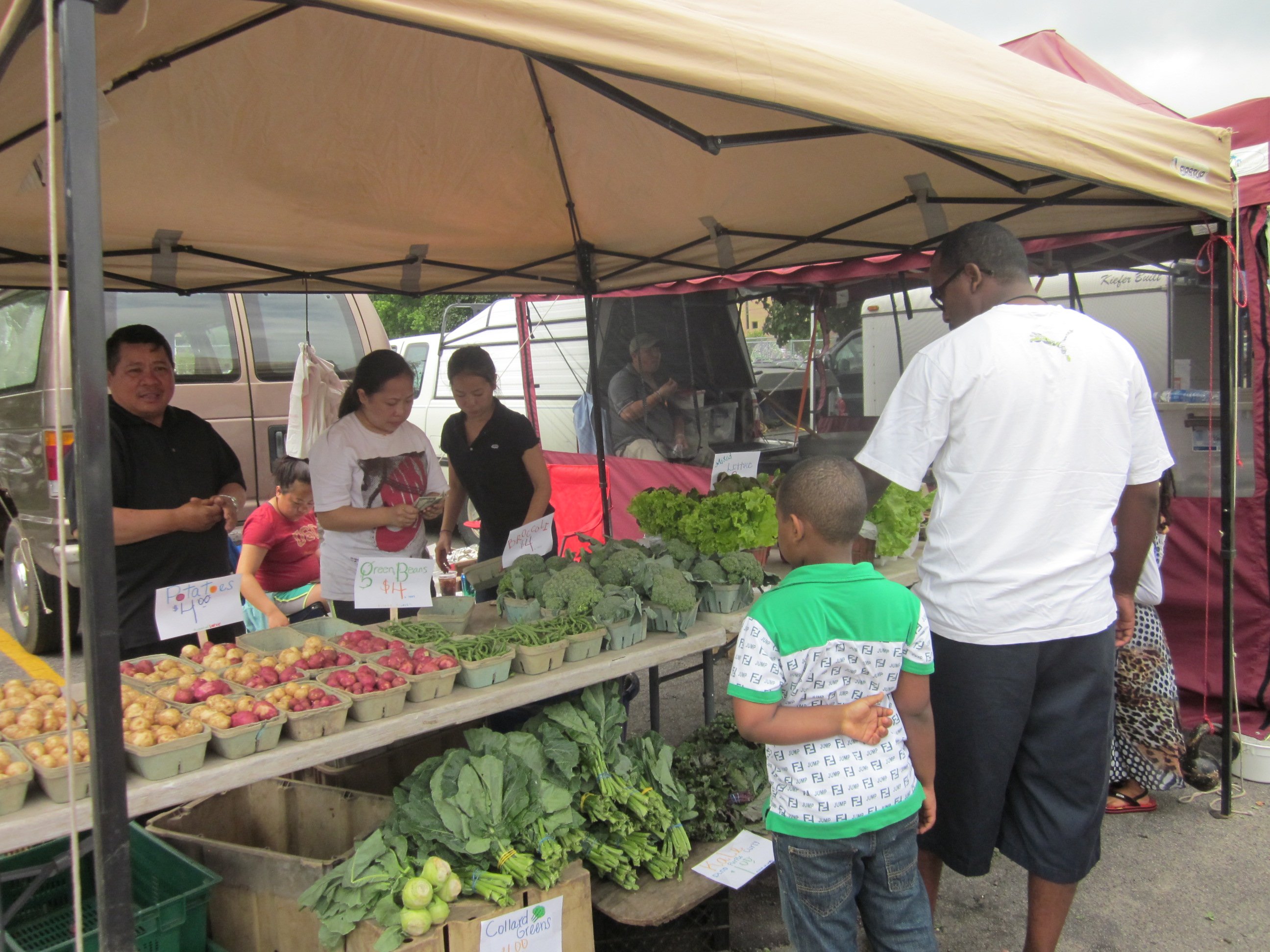 The Midtown Farmers Market, well into its 12th year of operation at the corner of Lake St. and Hiawatha Ave., is a bustling place that attracts shoppers from the surrounding neighborhoods as well as other parts of South Minneapolis. On Saturday mornings and Tuesdays afternoons, its vendors come from Minnesota and Wisconsin with home-grown or handmade items for sale. Musicians entertain people who have stopped to rest or to eat food cooked in booths or food trucks. Many people consider it a neighborhood gem.

The future of the market has been in question for a couple of years, but recent collaboration between the Minneapolis Public Schools (MPS), which owns the land, the Corcoran Neighborhood Organization (CNO), which runs the market, and a developer, L&H Station Group, has paved the way for preserving it as part of a larger, multistage project. Tentative plans were presented to the community in April, and further negotiations have progressed to the point at which the community is being asked to help shape the project’s design.

Here’s the back story. When a group of neighborhood associations, led by CNO, worked together to create the market a dozen years ago, they got permission to use land owned by MPS. They were promised use of the land for as long as the school system owned it. However, a few years ago, the school system decided to sell the land and the Brown Building, which is located on it. The future of the farmers market became uncertain. The L&H Station Group worked with CNO and other stakeholders on a plan that includes a permanent home for the market, as well as apartments, office and retail space, and green space. Houses are to be added at a later stage of the project. The question of what would happen to the school district’s building, which is used for adult education, remained unsettled, however, and so no agreement was reached with MPS.

Last year, a new entity entered the discussion. Hennepin County, which must decentralize the services now located at Century Plaza in downtown Minneapolis, became interested in locating its Family Services Center for South Minneapolis at the site and offered to buy the Brown Building. That spurred new talks, which have resulted in a somewhat different plan. If the sale of MPS’s land is finalized, which is expected to happen, a building will be constructed on Lake St. for Hennepin County’s services, giving MPS three years to find new space for its adult education. After that, the building will be torn down and, in later stages of the project, the apartments and houses will be built.

In early July, CNO Executive Director Eric Gustafson sent out an invitation to residents to participate in several working groups to help the developer design the space where the market will be. Each group will consider one of four issues: selection of retail services near the market; how the market plaza design can best serve transit users, farmers market vendors and customers, and community events; how the market can best show a commitment to environmental sustainability and urban agriculture; and how the project can best manage all forms of movement (e.g., biking, walking, and traffic).

Gustafson is happy that the project has overcome so many hurdles. He said, “Residents have put almost 15 years and well over 15,000 volunteer hours into planning for the future of this site. It’s gratifying to reach this milestone, and we look forward to arranging for a strong resident role in the final design of what will be built.”