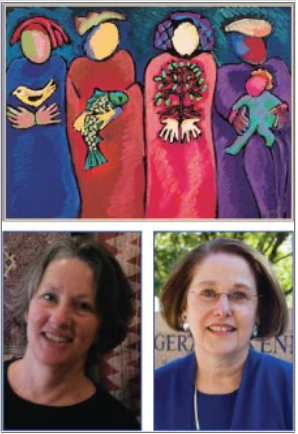 Imagine a future where attitudes and behaviors have shifted from individualism and consumption to behaviors that care for the Earth and the balance of all living things. And women’s voices are heard.

That’s the vision of Future First.

MWP: Why a congress of women? Why not just a congress?

I think our experience says that intuitively women have something different to contribute. In our political ecology, the whole register of women’s voices is missing. We are giving a chance for women’s voices to be raised.

MWP: How would inclusion of women bring different outcomes?

Raffensperger: Women are disproportionately affected by economic decisions in the country and around the world. Therefore, women are sources for solutions, for telling the stories of how they survived and what is needed in the future.

Theories of power that come out of Washington politics give a sense of power as coercion or domination. One of the ideas that we are testing out is power as communion. We are so often isolated in any of our struggles – whether it’s for a fair wage or against a mine or a pipeline. One of the questions we often have is “what can I do?” Alone, we don’t have a lot of power. But together, our power is magnified.

MWP: Why has this idea resonated with women?

Raffensperger: Women are the first environment; we bring life into this world. We are responsible for making sure that life continues and that the great-grandchildren are not alone, that they have butterflies, white pelicans and clean water.

Women are coming together. We are taking seriously our responsibility and creating a space where we can explore that responsibility.

This is not the equal rights of the emerging, early feminism. This is the next stage of claiming responsibility. And where better than the Midwest to claim our responsibility for all our of neighbor’s children and the honeybees, the birch trees, the mussels in the river – all of them?

MWP: What is the connection between the environment and the economy?

Raffensperger: [In the United States] there is a sense that we’ll gamble with the Earth; it’s a casino. And guess who will bear the brunt of the gamble when it goes bad? The public, the Earth and future generations. One of the things that we are saying is that we will not accept [corporations’] bad bets. If you are going to make a bet using “the commons” – these things that we all share – we are not going to accept that bet.

MWP: What are the goals and desired outcomes of the Women’s Congress?

Ann Manning: We see ourselves as a part of the bigger movement and we are beginning a new tributary to the movement. One of the key goals of the 2014 Women’s Congress is to see how the constellation of environmental problems is connected to our current economic structures. We can change this by making those connections more visible to people.

We want to shift the worldview from isolation and separation to the interconnectedness of all things. We’re building deeper coalitions among people in the movement and bringing new people to the movement – a mix of activists and women and men who are sitting alone with their fear and grief about what is happening, wanting a place to plug in and not finding it. And lastly, that [personal] inner shift of how do I go home and start living a different way. People are ready to engage in finding ways both large and small to make a difference protecting the planet for current and future generations.

Raffensperger: [We hope to have] some really rigorous intellectual work on what’s an economy for? What’s government for? Can we create new institutions?

And one of the things from the Women’s Congress is that we withdraw our consent to the failed experiment that we’ve run for a couple of hundred years. We give our consent to the things that fulfill our responsibility – to making sure our neighbors are well fed, to the children to come, to future generations.

MWP: Tell us more about that consent.

Raffensperger: We’re looking at new methods and institutions for giving consent. One emerging idea is that not only do we have individual rights – religion, free speech, to carry a gun – but there are rights of community, rights that we share – the rights to the commons, to healthy rivers.

One of the ideas of the Women’s Congress – which has always been the agenda of real democracy – is to extend rights, looking at the rights of future generations. We can fulfill these by standing together, to create new institutions. We can do that.

MWP: How would that happen?

Raffensperger: We believe in priming the pump with good questions. Partly because there aren’t any single answers.

A good question is one of the most powerful tools we have. The structure of the question opens up hearts and minds. Sometimes the answer isn’t words; sometimes it’s that story or a color, and sometimes it’s the song that starts deep in the chest as a lullaby for hard times.

If we have the right questions, after the congress, women and study groups can come together and apply these ideas and move them forward in their own communities. For example, you could challenge the economic suppositions of mining or pipelines.

One of the most important things is that people will walk out knowing: “What’s the one little thing I can do and what’s the big thing I’m going to work on?” The small things we can do individually in our households, such as energy conservation. And the only way we can address the magnitude of any of these enormous issues is by joining together with others. That is power. That is communion. That is recognizing that the future is in our hands.