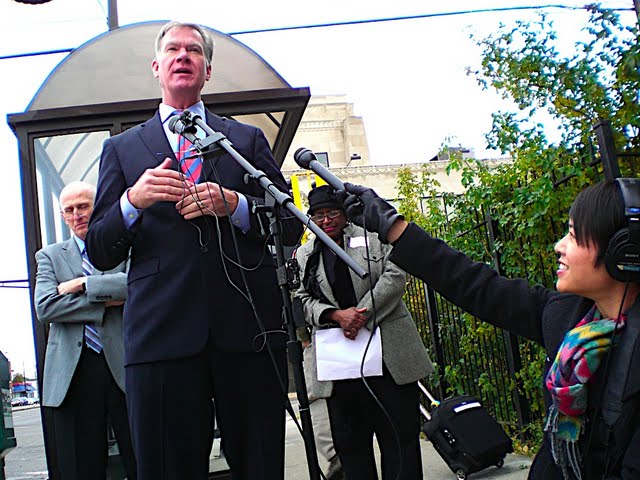 Amid mounting concerns and complaints about the coming Central Corridor light rail line, a group of deep-pocketed funders is working together to ensure the “equitable (and) responsible redevelopment” of University Avenue.

Jonathan Sage-Martinson, director of the Central Corridor Funders Collaborative, delivered this message Thursday to media members on a bus tour of the proposed 11-mile corridor line that will connect downtown Minneapolis to St. Paul. Sage-Martinson said they want to ensure the presence of affordable housing, a strong local economy and “vital transit-oriented” places along the route, as well as facilitate effective collaboration and communication amongst all the project’s stakeholders. They hope to do this through promoting learning, building “shared solutions” and investing capital, he said.

Already the Collaborative has invested more than $800,000 in research, consultants and planning projects, according to a press release. To date they have raised $5 million, and they hope to raise an additional $20 million to put toward achieving their goals over the next ten years.

The Collaborative’s overwhelmingly upbeat message came just a day after the Star Tribune reported that a group representing Asian business owners had filed a federal complaint against the Metropolitan Council over the project. The complaint, the second such that’s been lodged, alleges the Met Council did not adequately study the possible effects the project might have on small, minority-owned businesses along the line.

While none of the Collaborative-affiliated speakers explicitly addressed this new development, they stressed their commitment to preserving existing businesses and promoting the development of new ones.

“We have to do this right,” St. Paul Mayor Chris Coleman said at the intersection of University and Western avenues, one of two stops made along the tour. Coleman and others hope to see a station built at that spot, as well as two other locations not included in the Metropolitan Council’s original plans.

Coleman dubbed the entire project, set to be completed in 2014, a “corridor of opportunity” for St. Paul.

Nieeta Presley, director of the Aurora/St. Anthony Neighborhood Development Corporation, said she envisions branding the eastern section of the corridor, which is populated by small and minority-owned businesses, a “World Cultural Heritage District.” A hotel could be built along the corridor that would put tourists within easy walking distance of the area’s restaurants and shops, she said.

Asked how many residences and businesses she expects could be displaced by the project, either during the construction process or after its completion, Presley said she didn’t have a firm answer.

Neither did Coleman, although he did step up to the microphone to offer a response.

The tour then went on to the western edge of the proposed line, stopping at the intersection of University and 29th avenues in Minneapolis, where a station is planned.

There Mike Christensen, director of the Minneapolis Department of Community Planning and Economic Development, said he’d like to see the Prospect Park community, with its close proximity to the University of Minnesota, be transformed into a “bioscience area.”

He said it’s a natural fit because the University is already investing $295 million in a bioscience building project to the west. This section of the corridor redevelopment, he said, should include high-density faculty and student housing.

“We have no science community in the city of Minneapolis, and only a small fragment of university faculty and staff live in the five neighborhoods surrounding the university,” Christensen said. “We will change that here.”

Back on the bus, speakers touted other initiatives the Collaborative is supporting, such as the work of the University Avenue Business Preparation Collaborative, also known as the U7. The organization provides services like loans, grants, and “results-driven marketing” at low- or no-cost to business in need.

Sam Zimbabwe, technical director of the Center for Transit-oriented Development, a national nonprofit based in Oakland, Calif., characterized both the coming light rail project and the Funding Collaborative’s involvement as pioneering.

Even with all the project’s unknowns and the feathers being ruffled, the finished project is going to be an overall positive and progressive example for other cities to follow, he said.

“This tour is the first of many,” Zimbabwe said. “As this light rail gets built, you’re going to see lots and lots of people from around country wanting to come to see what you all have done here in the Twin Cities.”