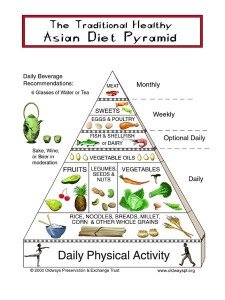 Asian Americans who grew up in the U.S. have been influenced over their lifetime of how to eat healthy. The American diet is shown in a food pyramid that doesn’t really represent or incorporate foods from other cultures. Many people choose to mix in both diet and switch other things. But did you know that many Asian cultures actually have a healthy diet too? Here’s an example of what many Asian foods consist of.

So what are the main differences between the two diets?

1. One difference between Western and Eastern diet is at the bottom of the pyramid. Westerns tend to eat more grains, oats, and more. While the Eastern diet consist majorly of rice, noodles, and tofu. A great change to make in your diet is to eat 100% whole grain/wheat breads and switching from white rice to brown rice can be a healthier choice.

2. In many Asian dishes, there is usually vegetables/fruits mixed in or as side dishes. In Japan, even fruits can be seen as deserts and served to children after dinner. Western dishes don’t usually include side dishes and whenever there is some, they are usually considered a full entree plate. It’s just more common for Asians to eat vegetables and fruits on a daily basis due to the different types of cuisines and culture.

3. Some people eat meat daily, rarely, and sometimes, always. The point is that everyone eats meat differently and at a different rate. In many cultures, meat was perceived as a luxury food and only available to the middle to rich classes. But in these days, it is something that everyone can have easy access to and it has become affordable.

4. One of the biggest differences between the American diet compared to Eastern diet is that the Eastern diet consist less processed food than the American diet. It could because of culture differences since America was built upon the slogan of ‘bigger and faster things can produce, the better’. In the U.S., it is much harder to find organic or fresh produces that are not being sent of to large groceries or being very expensive. In Eastern cultures, foods are usually home cooked with organic or local produces from their markets. It could because that they do have better access to fresh produces like fruits, veggies, fishes, and more.