The legislative stalemate on minimum wage indexing continues. By way of a refresher, House and Senate negotiators appear to have agreed on increasing the minimum wage to $9.50 per hour. However, negotiators remain deadlocked on the subject of “indexing” the minimum wage to the Consumer Price Index (CPI) so that the purchasing power of the wage keeps pace with cost of living in future years.

A March 10 Minnesota 2020 article debunked some of the standard arguments against minimum wage indexing. A March 11 Hindsight post demonstrated that minimum wage hikes under indexing would be modest, increasing by only $1.57 per hour over the course of the first eight years that indexing is in effect, based on current CPI projections.

Another way of looking at this topic is to examine how much the real purchasing power of the minimum wage will shrink if it is not indexed to the cost of living. Assuming that a $9.50 minimum wage is implemented in 2016 and remains frozen thereafter, the real purchasing power of that wage in constant 2016 dollars will shrink to $8.29 by 2023—a thirteen percent reduction relative to 2016. 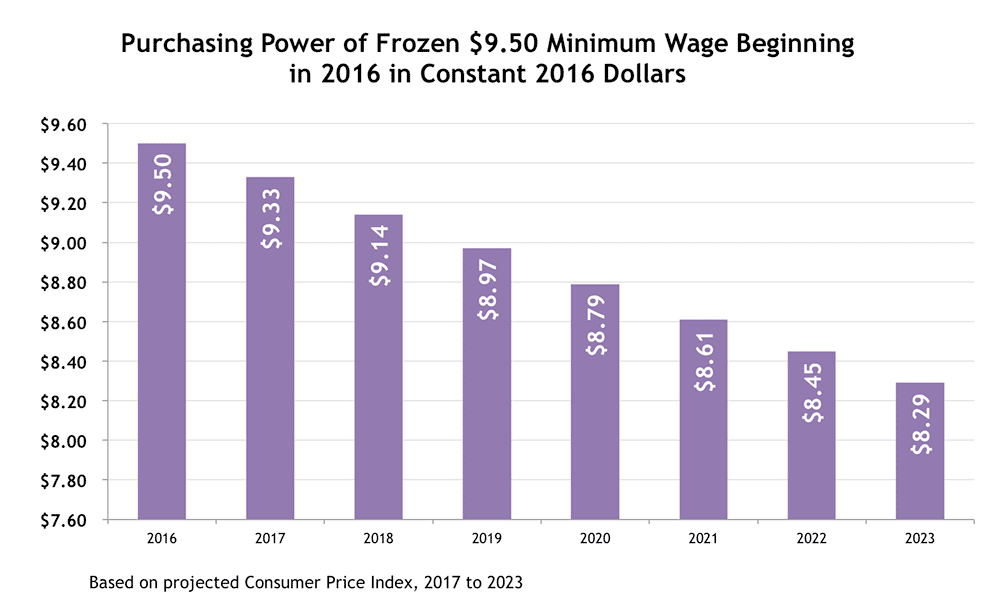 Failure to index is tantamount to saying that in future years inflation should be allowed to erode the value of the minimum wage and shrink the real income of the working poor, forcing them back into poverty. Policymakers should increase the minimum wage to $9.50 per hour in order to allow low-wage workers to catch up and index the wage to the cost of living in future years so that these workers keep up. Economic fairness and common sense demand nothing less.