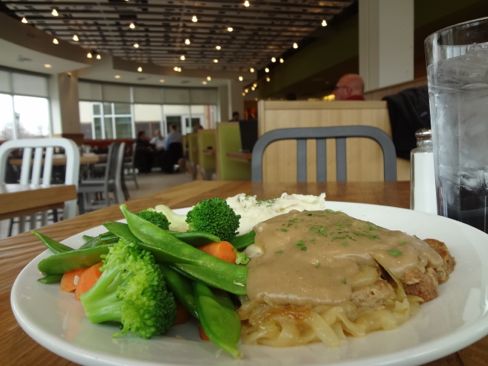 Daily Diner at University and Dale

I still remember the days when I used to get excited about the opening of new restaurants serving exotic dishes like pho and pad Thai. But nowadays, you can find pho and pad Thai on almost every block of St. Paul’s University Avenue, and my definition of new and exciting has shifted. What’s new and exciting these days is the Daily Diner, which opened Monday at University and Dale in Frogtown.

The menu features such exotic dishes as meatloaf with mashed potatoes ($10.99); fried chicken with fries and coleslaw ($7.99-$11.99); and spaghetti and meatballs ($11.99; for those of you who aren’t familiar with this dish, the spaghetti is sort of like lo mein, and the meatballs resemble albondigas. It’s topped with a sauce made from tomatoes, which sounds strange but can be quite tasty). For really adventurous diners, they also offer such odd combinations as chicken and waffles ($10.99), mac and cheese ($10.99), and a tuna salad sandwich ($6.99/$9.99). Don’t worry if you can’t pronounce some of these names; the waiters are very understanding.

I only tried a couple of the dishes on the menu, but I enjoyed them both. The daily soup special of green chili with chicken and black beans was lively, with only a hint of spiciness; and the aforementioned meatloaf had a novel and creative twist: billed as a Scotch egg meatloaf, it had a hardboiled egg baked into its center. Potatoes, in case you aren’t familiar with them, are a root vegetable that sort of resemble cassava.

The menu actually does offer some dishes that reflect the diversity of the neighborhood: including Capitol egg rolls ($8.99), nachos del norte ($8.99) Asian salad ($6.99-$10.99), Asian lettuce wraps ($8.99), and chicken or beef fajitas ($12.99). Breakfast items are also available from 7 a.m. until noon Monday to Saturday, and all day Sunday (10 a.m. to 3 p.m.) ranging from cinnamon rolls and pancakes to ham and eggs and huevos rancheros.

The most interesting thing about the Daily Diner, though, isn’t the menu—it’s the mission. The diner is being operated as “a training restaurant for graduates of the Union Gospel Mission’s programs to transform and recover the lives of those in poverty or homelessness.” 75% of the staff are what their press release describes as hospitality industry seasoned professionals, and 25% are graduates of the Union Gospel Mission’s programs. No alcohol, which is understandable. And no Bible tracts, either.