Ramsey County Commissioner Janice Rettman, business owner Phyllis Gilliam, and St. Paul Mayor Chris Coleman cut the red ribbon that stretched across the room in a vacant business space at Frogtown Square on June 16. A whole lot of folks chatting and enjoying the company of each other made what was meant to be a grand opening also a grand party as business partners, residents, and neighbors of Frogtown Square shared food and jazz.

Sunday’s Best Boutique business owner Phyllis Gilliam, holding a picture of her deceased mother Sarah Hunter, shared a childhood memory of seeing her mother and other residents who walked with protest signs to close a strip-joint and stop lewd entertainment on the same corner where Frogtown Square is today.

Resident Barbara Bertsch said before she moved into the building her furniture never looked good, but after moving into King’s Crossing, an affordable apartment complex for seniors within Frogtown Square, she said she loves the look of her apartment with the same furniture.  She said, “The apartment just makes the furniture look so much better.”

Resident Dora O’Neal said, “I like the neighborhood. The manager is really nice, and a lot of people are nice and friendly, and the place is clean.”

Evolving from a plan to transform the area around the intersection of University Avenue and Dale Street from a lewd entertainment area to a profitable business and wholesome residential community, the University Dale Redevelopment Holding Company (UDRHC) formed a partnership under the name of NEDU, with four of its members: Greater Frogtown CDC, Model Cities, Neighborhood Development Center (NDC), and Aurora St. Anthony Neighborhood Development Company. 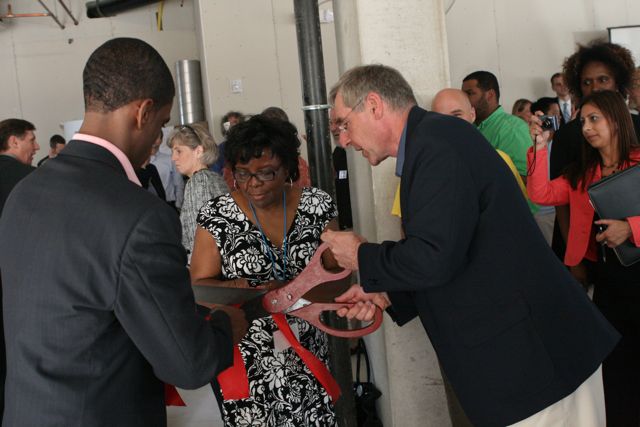 Mike Temali, Beverly Hawkins, and Melvin Carter cutting up the red ribbon to distribute to everyone. (Photo by Maren Misner, Neighborhood Development Center)

Frogtown Square, the first floor commercial business space of a four-story business and residential complex, was built with space for seven retail business spaces on the first floor. Constructed by housing developer Episcopal Homes of Minnesota, residential apartments called King’s Crossing are located on the upper floors with 49 one-bedroom units for seniors and one unit for an onsite building caretaker.

The building is managed by Lisa Boyd of Episcopal Homes, who said, “One-half of the residents are from Cambodia, China, Ethiopia, Laos, Trinidad, and Vietnam.” She said “one-third of the residents are African Americans” and the rest are people from other ethnic groups.

St. Paul City Councilmember Melvin Carter III said he was born and raised in the neighborhood. He recalled telling developers, when plans for Frogtown Square were brought to him, “Make it look like the pictures.” Then he said, “And it really does!”