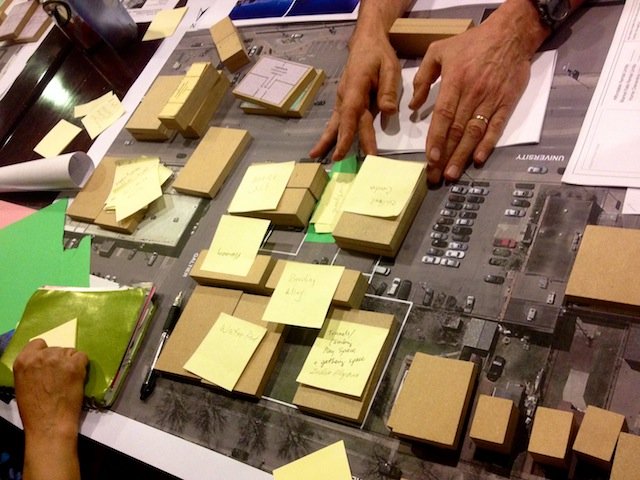 Residents design a plan for the redevelopment of the Saxon Ford site. Photo by Kayla Steinberg.

A bowling alley, a water park, a community center for the elderly, a pharmacy, hospice care, and green space were just some of the many ideas that residents came up with for the redevelopment of the largest vacant site in Saint Paul’s Frogtown neighborhood.

On Wednesday, February 19, the University Buffet was transformed from a restaurant into a city planning workshop for 18 Frogtown area residents, two city workers, and 13 Corridor Development Initiative staff and consultants.

“Are we ready to create and envision what our community is going to look like?” asked workshop facilitator Sheronda Orridge, as she started the meeting.

The Frogtown Neighborhood Association, Local Initiatives Support Corporation (LISC), and the City of Saint Paul have teamed up to put on four workshops about the redevelopment of the Saxon Ford lot, located at 253-255 University Avenue in St. Paul. The city bought the lot a few years ago. The goal of these workshops is to provide the city with information about what Frogtown residents want to see in their community.

The next workshop will take place on Wednesday, March 5 and will include a panel of developers. The fourth and final workshop will be on Wednesday, March 19 and will be used to summarize the information gained in the first three meetings into developmental guidelines and to get a consensus from the participants on these guidelines. Both will be at the University Buffet, 225 University Avenue West, and will last from 6:30-8:30 p.m. All Frogtown community members are invited to attend.

“The city’s at the table in a meaningful way,” said Gretchen Nicholls, the program officer at LISC. “They are really very interested in what the community’s ideas are.”

Caty Royce, the executive director of Frogtown Neighborhood Association, said city workers will have to listen to community input, even if they do not like what they hear. “These folks will not go unheard,” she said. “They just won’t.”

Hilary Holmes, a Saint Paul city planner, added: “This is the first time I’ve participated in a workshop like this. I’ve been really interested to see the energy in the room and what people come up with. This is a really involved neighborhood so the city is listening to the residents.”

Orridge explained that the first workshop on February 5 explored what is already inside the neighborhood, and what residents would like to see added to their community, in an activity called asset mapping. Assets community members said were missing from Frogtown include: grocery stores, pharmacies, an end of life care facility, and gathering spaces. Other common themes of the discussion were the community’s strengths, such as its diverse community and power to make change. The workshop attendees also agreed they did not want their neighborhood to gentrify with the addition of the Green Line.

At the second workshop on February 19, Frogtown residents created development scenarios with the help of architects from the 4RM+ULA (pronounced Formula) architecture firm, city planners, artists, and employees of Frogtown Neighborhood Association, LISC, and Aeon (a nonprofit developer, owner, and manager of affordable housing units).

The residents designed their scenarios by placing blocks that represented different types of housing, retail, business, and community spaces on large printed maps of the site, which, according to Royce, is the largest vacant parcel in Frogtown. After groups of participants created development scenarios, a creative team sketched what the buildings could look like, and Aeon representatives used a spreadsheet to calculate their financial feasibility.

Holmes pointed out some zoning constraints of the site. The height limit for the development is 35 feet, or about three stories. In addition, because of the funds the city used to purchase the site, it is necessary to include at least some affordable housing in the development. According to Sara Swenson, the marketing and public relations manager of Saint Paul’s Department of Planning and Economic Development, 30 percent of the dwelling units on the site must be accessible to people at or below 60 percent of the area median income because some of the funding used to buy the site came from the Land Acquisition for Affordable New Development (LAAND) loan program.

At the workshop, not everybody adhered to these restrictions in their development scenarios.

“This is a creative process,” said Alan Arthur, the President and CEO of Aeon, to the workshop participants. “Don’t think about zoning right now. Design something for the people.”

The ideas participants came up with were varied, but several overarching themes arose. Common elements included retail space along University Avenue with affordable housing along Sherburne, green spaces, and places for community gathering. Almost every proposal suggested that the site should be used for more than just one purpose.

Other ideas included: a bowling alley, a water park, a community center for the elderly, a roller rink, hospice care, a pharmacy, underground parking, a playground, a cafe, young adult housing, corporate offices, and makers’ space.

According to Arthur, one difficulty in the development process will be to attract commercial businesses to the site because newly built spaces are more expensive to rent than old ones. Nicholls said another challenge will be to convince developers to invest in the site.

James Garrett, Jr., an architect at 4RM+ULA, suggested to the residents to try to increase the density allowed for new development, to create a community benefit agreement between the community and the developer of the site, with approval from the city, and to look at other housing typologies, such as co-ops. He said these methods would help Frogtown to hold onto its “socio-cultural identity and history as new development occurs.”

The final product of the workshops will be “a set of development objectives, or guidelines, to inform any future investor what the community would like to see,” said Nicholls. “And that set of ideas are informed by the financial realities of what can be a possibility.”

Chad Kulas, a Frogtown resident and former Frogtown Neighborhood Association board member, who attended the workshop added: “A lot of residents came out to voice their opinions and it would be a shame if we didn’t have a chance to get our voices heard in the final project.”

Miranda Walker, a project manager at Aeon, is impressed by the workshops. “I think what they do is transfer the developer hat that we wear every day to the neighborhood, and in a good way, because they walk the sidewalks every day. They know what’s needed in the neighborhood.”

As the meeting closed, Orridge said:  “This is the first, but we don’t plan on it being the last of these types of meetings where we discuss what’s going on in our community.”

Workshop participants gathered at University Buffet to discuss the future of the Saxon Ford site. Photo by Caty Royce.

Workshop participants discuss their visions of redevelopment in their neighborhood. Photo by Kayla Steinberg.

A sketch of one of many redevelopment plans thought up by Frogtown residents. Photo by Caty Royce.

Residents design a plan for the redevelopment of the Saxon Ford site.