The ice cream truck rolled down Charles Avenue with music playing on a hot summer night, but no children ran to greet it.  Many of the children were gone, having been evicted from the neighborhood through the foreclosure of their homes.  And the children who were on the street had already been treated to ice cream during an event organized by Frogtown Neighborhood Association and the St. Paul Fair Lending Coalition to address the plight of the remaining residents living in the midst of boarded houses and vacant lots.

On just one block on Charles Avenue a bit east of Dale Street, 16 houses on a single block have been through foreclosure since 2006, according to event organizer Sam Buffington.  Seven of those homes remain vacant, and two of these are slated for demolition.  Six houses have been turned into rentals, and only 3 of the 16 have become owner-occupied again after foreclosure.

The event on Charles Avenue is the first step in a campaign to convince vacant property owners – whether they are banks, land speculators, or the City Housing & Redevelopment Authority – to take appropriate action and not allow these homes to sit empty, creating nuisance condition for neighbors and further depressing property values in the neighborhood.

Sam Buffington, a community organizer at Frogtown Neighborhood Association (District 7), explained the use of community organizing techniques to prevent foreclosures and hold property owners accountable for the effects a vacant property has on the neighborhood.  Buffington said their efforts began with outreach to tenants living in properties being foreclosed to inform them of their legal rights during the process.  Then they developed expertise to reach out to homeowners facing foreclosure, help them understand their options and pair them with counselors who could assist them with loan modifications or other solutions.

The group also wants to effect institutional change.  Buffington described how lending practices led to foreclosures which resulted in vacant properties.  He referenced two maps of St Paul produced for the District 7 Planning Council to demonstrate the point.  The first shows a high concentration of “unstable” loans originated from 2004 to 2007 in Frogtown and certain other neighborhoods.  The second map shows areas with high residential property vacancy rates in 2010; the high vacancy areas are almost identical to the high unstable loan areas. “Vacancy was no accident” said Buffington. 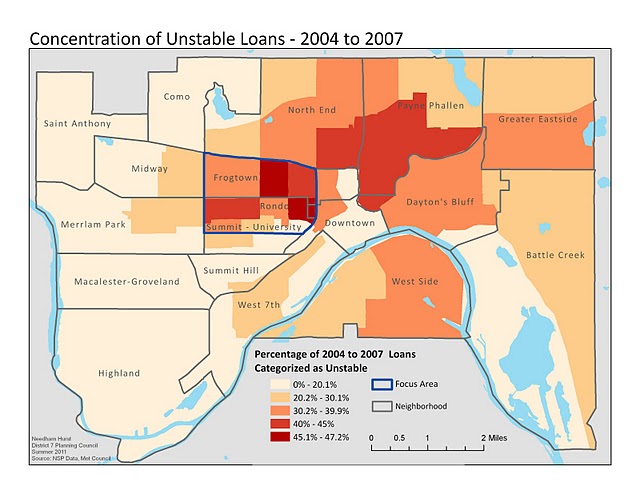 The data for the city vacancy map is for the quarter ending September 2010 and uses USPS Vacancy Data made available through the Department of Housing and Urban Development data website.  The “Unstable Loans” maps is a map of the percent of all loans originated between 2004 and 2007 in each census tract that HUD classifies as “high-cost.”  This designation mostly signifies the loans were subprime.  Those data were made available by HUD through their Neighborhood Stabilization Program and there is more information here. Maps created by Needham Hurst for District 7, and published here with permission. 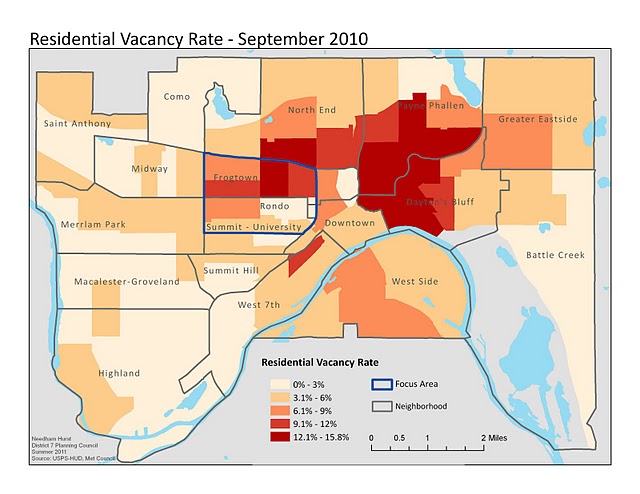 Much research confirms a connection between “high cost” or “unstable” loan products and resulting foreclosures, and some research shows that poor neighborhoods and communities of color have been far more likely to receive sub-prime and high cost loans.  “It is no accident that high rates of subprime lending and foreclosures are concentrated in segregated neighborhoods of color” according to a 2009 report by Institute on Race and Poverty at the University of Minnesota Law School.  The report states that the reason for the disparity is not simply discrimination against individual persons, but is also the result of segregated neighborhoods, and a lack of access to credit in segregated minority neighborhoods

At a meeting before the Charles Avenue gathering, organizers discussed statistics about lending practices, foreclosures and the effects on certain St Paul neighborhoods. Buffington pointed out that the situation in these neighborhoods is well known.  “The elected officials know about it, the banks know about it.”  With the statistics themselves, Buffington said,  “we’re not seeing real change in how banks are dealing with low income communities, not seeing change in how it’s happening in the neighborhood, not seeing change in really what our elected officials are pushing.  So it’s not going to be the statistics that change things.  It’s going to be people’s personal stories that change things.”

And personal stories are exactly what the group went to Charles Avenue on a hot summer evening to collect –  the stories from people about what happened on their block over the last several years – and to document “what they would like to say to the banks that foreclosed on these homes or to the people who own them now and are letting them just sit there,” said Buffington.

The event took place on a block of Charles Avenue fairly equally composed of  well-kept homes, vacant homes – some open to the elements and other boarded, and empty lots where homes once stood.  Organizers posted signs in the yards of vacant homes, detailing what was known about the owner and the amount of time the home had been vacant, and knocked on the doors of all occupied homes to invite residents out to tell their stories and have some ice cream.

Residents came out, and they talked.  Some were photographed with signs made to express their feelings.  “Vacant houses are scary,” read a sign held by two children. Others gave their “testimony” in loud, theatrical voices.

Resident Wendy Simon’s comments were more subtle.   She said she notices an unusual quiet on the block where she and her family have lived for 17 years.  She talked of past summers filled with the voices of neighbors in their yards and the sounds of children playing and riding bikes in the street.  “This summer is different,” she said.

She noticed the difference last winter, too, as she sang with the local caroling group that has been gracing their neighbors with song at Christmas-time for the last 15 years. “It’s amazing how much that touches people,” she said.  But lately, they had to walk by so many houses that were dark.

Wendy and her husband John Simon practice medicine in Woodbury. This Saturday morning, just as they have done every Saturday morning for many years, they will chat with the remaining neighbors over a weekly community breakfast hosted in one of their yards or homes.  When asked what keeps them here, Wendy said, “It’s what drew us here in the first place. Community.”