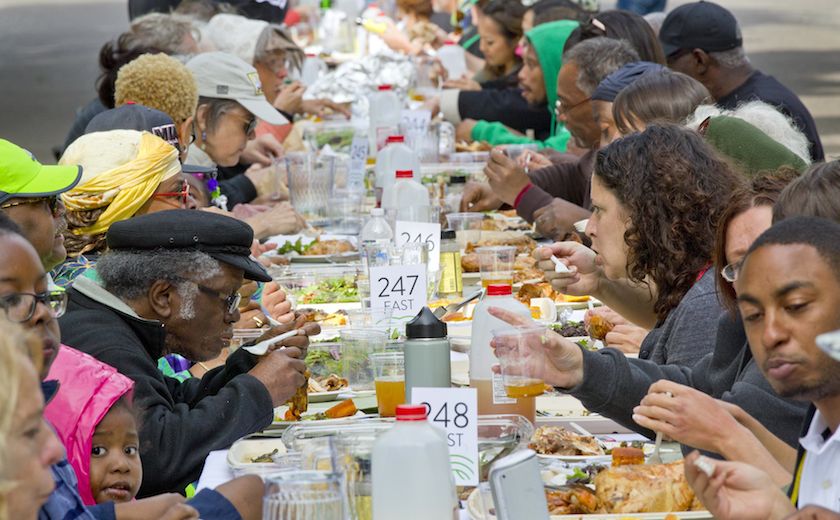 Not everyone thinks about their food as art, but one St. Paul artist is using art to spread awareness about food access issues in his neighborhood.

When artist Seitu Jones looked out the window of his apartment in Frogtown, he noticed many people in his neighborhood were buying their groceries from the local convenience store. It was a revelation to him, and he decided he wanted to do something about it.

On Sept. 14, Jones, along with Public Art St. Paul, organized an outdoor community meal and art project that fed nearly 2,000 people. The project, called CREATE: the Community Meal, took place on a stretch of Victoria Street in St. Paul and was meant to raise awareness of areas with poor food access and spur community conversations over the problem.

According to a 2010 Ramsey County Public Health report, low-income communities and communities of color in St. Paul face a number of barriers to healthy foods, such as cost, quality and availability. More than 90 percent of the survey participants said they were “somewhat” or “very interested” in eating healthier, and 60 percent of low-income participants said they lacked money to buy groceries at least once in the three months prior to taking the survey.

There were artists working at every level of the project, Jones said, and some of the servers were artists who had volunteered to participate. Even the food itself was meant to be a work of art, he said.

Jones and members of Public Art St. Paul also built mobile art kitchens that could be pulled by bike around the neighborhood to feed Frogtown residents and teach them how to cook. 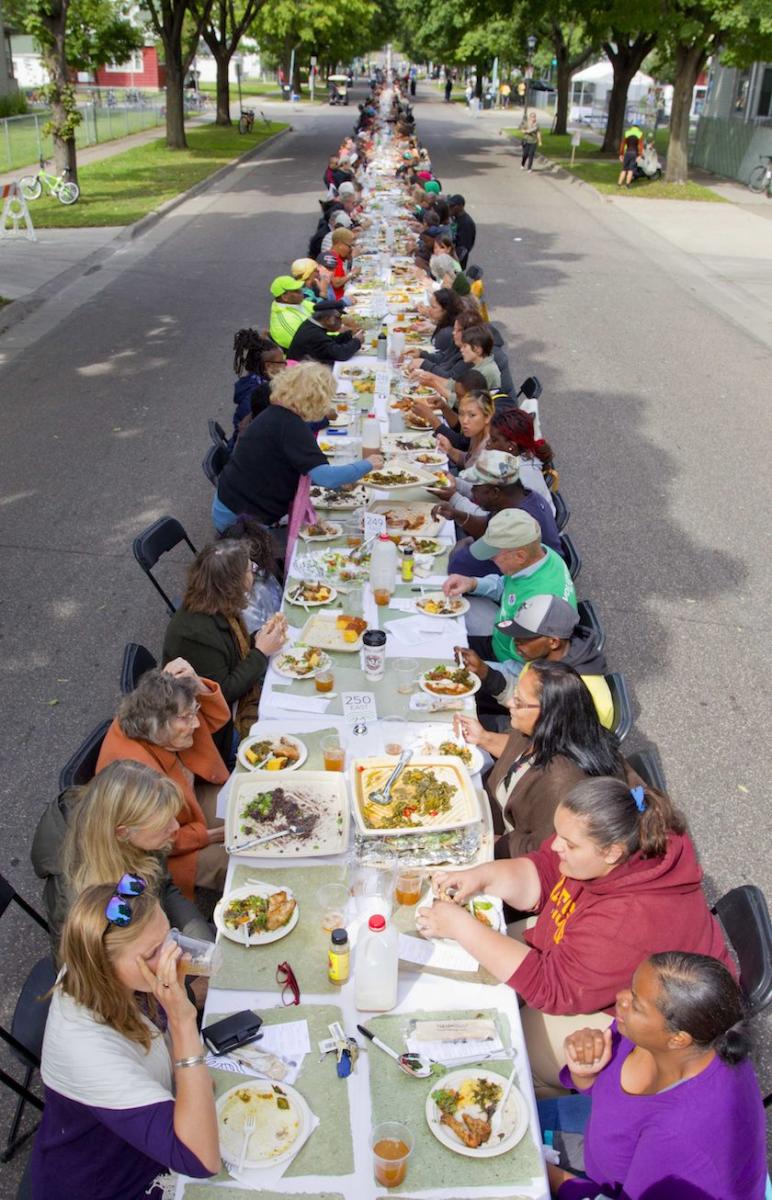 CREATE organizers worked with local farms sourcing most of the ingredients from Minnesota farms no more than 47 miles away. Chef James Baker and Sous-Chef Lachell Cunningham of the Elite Catering Inc., alongside a team of volunteers, cooked the meal, which consisted of chicken, salad, pulled greens, cornbread, and apple cider.

“Remember, they call cooking a culinary art and Seitu is an artist,” Baker said. “So, when he asked me to do this, I had to.”

Blending this community meal with art made sense, Jones said, in part because he has been combining social engagement with art for a long time.

He grew up in the ‘50s and ‘60s when many different cultures and politics were intersecting, he said, and in the early ‘70s he joined the Black Arts Movement.

“One of the things I learned at that time is that we should leave the world more beautiful than we found it,” Jones said. “So my work as an artist has taken on a real heavy social engagement component.”

Public Art St. Paul president Christine Podas-Larson said the project was far bigger than anything Jones had taken on before, and said the project could help spread awareness in the area regarding the role that residents play in the local food system.

“2,000 citizens talking about [food access], it’s like throwing a stone in the water,” Podas-Larson said. “It can have incredible rippling impacts. I think one thing is a lot of people maybe don’t understand their place in the food system.”

That’s a point Jones wanted to make with the project, she said, that residents understand that being denied access to healthy foods isn’t just something they need to live with.

Alex Liebman with Stone’s Throw Urban Farm said the community meal could help show residents how food gets to the consumer. Stone’s Throw provided herbs and salad greens for the meal.

“It’s exciting to have this very, very tangible evidence of where your food is going,” Liebman said. “It’s not often that it is presented in such a grand way.”

Roxanne Darjhn, a community organizer in the Summit-University neighborhood, volunteered to host a table at the event. “I thought it would be a good idea to engage the residents and get to know some more residents, more of an outreach effort,” she said.

State legislator Rena Moran, who represents District 65A, joined the meal that day and said that food access is a particularly important conversation, especially when talking about health issues that impact low-income communities and communities of color.

“I think we really have to be very intentional in saying, ‘How do we create those opportunities for the prevention of obesity and diabetes and things like that,’ to really look at how we can create those spaces,” she said.