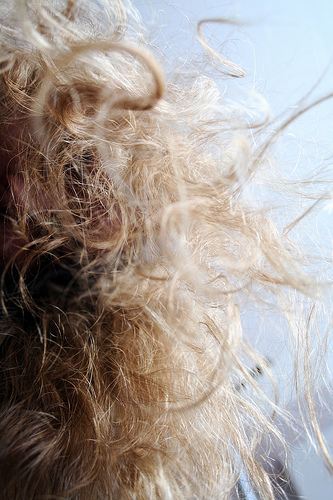 After 21 years I’ve decided to embrace the frizz and thickness that is sometimes referred to as my hair. Living in Minnesota, not quite land of the Jews, my hair always stuck out like a sore thumb or as a friend of mine says to me, “Sarah, you don’t have normal white girl hair.” Anti-frizz hair products literally evaporate in my hair. Before high school dances a friend of mine laid me down and ironed my hair…with a clothes iron. I hated my hair and typically resorted to simply throwing it on top of my head.

Thinking about my relationship with my hair though is more than what it might seem on the surface. I start to think about what does my “Jewish hair” really represent. How is my hair a stereotype of Jews? And how do we as a Jews embrace or run from stereotypes? Is embracing synonymous with perpetuating? Is perpetuating a stereotype about something as trivial as hair even damaging in the first place?

My experience has been that the majority of minority groups feel quite comfortable laughing and embracing stereotypes of their culture while in similar company. However, what happens when I am with a group of non-Jewish friends? Do my non-politically correct jokes such as “all the Jews are lined up at Costco at 9:00 AM” continue or am I a little more aware of the consequences of perpetuating stereotypes in the company of those not in the Jewish community? Do I embrace the fact that my sister and I almost always have a coupon in hand or do I hesitate to break out that coupon, due to fear of perpetuating at times a damaging stereotype of cheap Jews?

I have no answers to these questions; however, I have grown more comfortable laughing about stereotypes of Jews in communities where I feel comfortable. My comfort is obviously higher when I am surrounded by Jews, but I have found that cracking jokes in front of close friends of mine who are not Jewish in some ways lets them in a bit. It lets them in to the culture of Judaism, a culture full of humor and life.

As stated earlier, Minnesota is not swarming with Jews and therefore it is quite common for me to be the only Jew in a circle of friends. In a state like Minnesota, ignorance and anti-Semitism are not necessarily synonymous. Many individuals simply do not know ANYTHING about Jews; therefore their questions such as “Do poor Jews exist?” are not necessarily anti-Semitic but simply out of lack of knowledge. Questions such as this, demonstrate a desire to learn and gain knowledge, individuals asking these questions are in fact trying to escape the “ignorance is bliss” and passive Minnesotan approach.

Although, I have become happy to accept these questions, I still struggle with how I represent Judaism when I am a person’s sole representation of the Jewish people. It’s not always easy being the only Jew in the room, as so many other minorities experience often (and often in more extreme ways than we do as Jews). It is exhausting being asked dozens of questions and feeling like one screw up might make or break that person’s perception of Jews.

So… what do we do? Should we not talk about the internal issues of the Jewish community with non-Jews? When someone in the news is convicted of a terrible crime we cringe when finding out they are Jewish. So many times I have been upset when finding out about someone who did something horrendous such as sexual assault or financial fraud out of fear that this would simply perpetuate stereotypes and negative views of Jews. This disappointment felt by the Jewish community comes from the acknowledgement that at the end of the day, non-Jews overall know very little about Jews and so we want what they do know to be positive and only positive.

However, we are a people. People have flaws. People are varied. There are, and most likely will always be, individuals full of hate and bigotry but I believe that not portraying the Jewish people to be as complex and varied as we are, is perhaps more detrimental to our representation to non-Jews.

At times Jews have been accused of acting with an attitude of superiority, acting as if we truly believe we are the “chosen people” and that our rise to success in the United States should be a model for all minority groups in the country. Although it is not our responsibility to prove ourselves to other communities, perhaps living in an honest way and conveying faults in our community could only simply empower our community.

Humor can be empowering, let’s use it. Let’s try kicking stereotypes in the behind by giving them our own twist and in certain situations owning them. Let’s try educating folks about the Jewish people with confidence and honesty.

Anyone up for the challenge?

Sarah Brammer-Shlay recently moved to Washington DC, and is working as a Community Organizer for Jews United For Justice through Avodah: Jewish Service Corps.