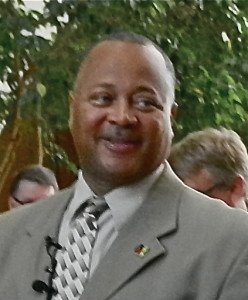 The newest candidate for Hennepin Sheriff is Eddie Frizell, a Deputy Chief of the Patrol Bureau with the City of Minneapolis Police Department with 21 years of experience. He is also a Colonel in the National Guard with tours in Iraq and Kuwait. Frizell is challenging the current Sheriff Rick Stanek.

Just yesterday, Eddie Frizell was endorsed by the Hennepin County DFL after months of consideration. During the endorsement process, Frizell faced tough questions. One person asked Frizell, how would he ensure more probable cause and less profiling. The answer was that when officers better reflect the community, they make better decisions on probable cause. The vote of support was unanimous and enthusiastic.

“It is clear to us that you understand creating a livable, safer community and that this requires a multi-faceted approach involving partnerships at all levels of the community and government. As a result, the Hennepin County Sheriff’s Deputies Association supports your candidacy for Sheriff of Hennepin County!”

As a writer, I wanted to contrast the endorsements of both candidates for Sheriff. However I ran into difficulties on the Stanek endorsements.

Normally, endorsements are published with glowing letters. A quick email request would generally provide substance for an article. I went through Sheriff Stanek’s list of endorsements looking for such an endorsement. I sent emails to all major endorsers. I was able to find email contacts for about half of the individuals on the list. Most of the individuals are on the Sheriff’s Community Board listed on the Hennepin County site, complete with bios. Note that there are misspellings like “Paster” instead of “Pastor” when actually the people list themselves as “Rev.” I also sent an email to the Republican party asking for confirmation and a statement. I used the July 20 list of endorsers and I gave them over a month to respond. One new individual name was added since July 20th with no contact info found.

The best endorsement statement was from a union, “We endorsed Rich Stanek because of his experience and the good working relationship we have had with him.” Many other statements were perfunctory like “The HC Attorney’s office legally represents all HC Departments including the Sheriff’s office. In essence I represent Sheriff Stanek professionally. It has been my practice to endorse Sheriffs and Commissioners that I represent.”
Some endorsements were done casually at a party. A comparison of the endorsement website pages through the wayback machine indicates that these endorsements were collected before Frizell entered the race. How much weight should we give endorsements that are perfunctory without looking at both candidates?

Is Stanek endorsed by the GOP? A google search reveals no announcements, articles or lists on websites. My emails to the GOP are unanswered. I was sent a picture of Stanek’s lawn sign at the GOP fair booth so I presume that means endorsement. Why wouldn’t the GOP put out an announcement if they endorsed Stanek? Why wouldn’t Stanek put the GOP on his endorsement page? Where is the enthusiasm?