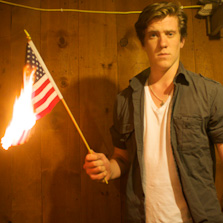 Since Minnesota Fringe Festival season is kicking into high gear once again as we barrel ahead toward August, it made me think about last year.  In addition to the Fringe blogging gig, I also get reviewing assignments from the Twin Cities Daily Planet during the rest of the year, and also log some time as an evaluator for the Ivey Awards.

Last year for the Fringe, I saw 56 shows, plus the lottery, Five Fifths of the Sound of Music, the two Fringe-For-All preview showcases, and the Out of Towners’ Showcase.

Even with that I’m still kicking myself for missing things like In The Red and Brown Water, Neighbors, and The Pride.

We’ll set aside my own plays that surfaced last year – in Minneapolis, Leave (Urban Samurai Productions), the Project 515 Tour, Medea and Jason: Rubicon Waltz (Flowershop Project), and a reading of my Fringe script How To Date A Werewolf; in Los Angeles, But Not For Love (Renegade Theater); in Chicago, Two Left Feet (Commedia Beauregard).  We can assume without fear of contradiction that I loved each of these, my children, in their own way, for their own strengths and weaknesses.  The joy and terror for a playwright of hearing their characters speak and move around in three dimensions tends to put a big dent in one’s objectivity.

If I’m going to kick around the idea of a Top Ten list, there has to be one for Fringe and one for everything else.  I don’t do that because theater the rest of the year puts Fringe shows at a disadvantage.  In fact, for me, it’s the opposite.  Fringe is some of the most exciting theater I see all year.  It’s hard for anything else to compete.

But the Fringe has the enviable advantage of a focused timeframe, lots of press attention, and a built-in community that’s ready to experiment and see something they haven’t seen before.  You can take chances at the Fringe that might seem suicidal the rest of the year, when you’re out there pimping your show against the vast array of other seasonal offerings from the many and varied theater companies of all sizes, shapes, colors and advertising budgets.  Getting anyone’s attention is much, much harder.

In the 2011 Fringe, the shows I enjoyed most were…

First up, there were only two shows I saw twice.  And that’s always an indicator that they hooked me particularly hard (links to the reviews explain why)…

After that, in alphabetical order, the other eight were

Ballet Amore – Cities’ Classical Dance Ensemble
This is one of many shows I caught late in the running and didn’t get around to posting a proper review about.  It’s one of the few dance groups I recall seeing in the Fringe that put a big focus on ballet moves as the foundation of nearly all their pieces.  This was more of a variety pack of dance numbers from strictly classical to more innovative and free-wheeling, featuring both large and small numbers (and sizes) of dancers.  Some of the dancers even doubled as providers of live musical accompaniment.  There was a sense of humor as well as style and grace on display here.  Plus, I have to admit, bonus points for dancers like Luke Tucker and Riley Thomas Weber in the mix.

Another review that didn’t get posted.  I enjoyed other musicals last year, but this one had the added advantage of being a musical in which the cast could actually sing.  (I know, you’d think that’d be the low bar for point of entry, but I enjoyed a couple of musicals at the 2011 Fringe in spite of the singing rather than because of it.  Highlander had the singing to support its Fringey concept.)  The original sci fi/fantasy film about a race of immortals battling to be the last one standing was already cheese-tastic to begin with.  Making it a Queen-inspired musical was a perfect fit.  Sending up the sexual (and homoerotic) subtext of the thing was an additional hilarious bonus.

Improvidence – Infinitely Spectacular Productions
Yet another late entry on my Fringe schedule that didn’t make the blog.  They were part of my pre-Fringe Top 10 because of the people involved and the politically incorrect concept of a couple of slacker dudes who accidentally start their own religion.  The fact that it was also a musical comedy made it that much more intriguing.  The reason the show is still in my Top 10 long after the Fringe is over is they delivered on the concept, and then some.  They didn’t just go for the easy jokes.  This was smart comedy that made you think about the nature of religion, belief, and fanaticism while still serving up songs with lines like “I’m down on my knees… I want to make your kingdom come.”  Only at the Fringe…

The Sometimes Grace of Saint Simon of the Water – Young Fox Theatre
One last latecomer on my Fringegoing list that I wish I’d caught earlier and been able to spread the word about.  This show was just what a one-person show can and should be at its best, but rarely is.  Director Ted Eschweiler and actor Matt Ouren took Timothy Otte’s poetic script and delivered on its promise in all kinds of unexpected ways.  What worked was the simplicity of the piece.  It wasn’t flashy, the actor wasn’t playing all kinds of different wacky characters in outlandish costumes.  It was just the story of a young man facing mortality as he tells the audience the story of the woman he loved and lost – to the church, to her husband, and to death.  No melodrama here.  Just honest emotion and genuine humanity.  A lovely, compelling piece of work that gave you a lot to think about after you left the theater.

and rounding out the post-2011 Fringe top ten, another old friend

(not quite busting the top ten, and it was hard to kick them out in favor of the above…

The Smothers Brothers Grimm – Comedy Suitcase
Another Fringe show that unexpectedly moved me, with a story of a young boy’s first experience with death.  Because the boy’s late grandfather was a committed jokester, the main strategy for coping with loss turns out to be Grimm Brothers’ fairy tales seen through the lens of the styles of classic comedians of old.  It could have been just another excuse for a sketch comedy show, but Comedy Suitcase’s Joshua English Scrimshaw and Levi Weinhagen develop a framework for the concept that gives the whole thing added emotional punch.  Comedy with its heart on its sleeve in the best possible way.

Bare – Minneapolis Musical Theater
If a person can get in to see a show for free, just for writing about it for the Iveys, what would prompt them to go back again and pay for a ticket?  A show this good, that’s what.  This powerful rock opera would have drawn me back a third time if I could have found a way to cram it into my schedule.  I even searched out and downloaded the music right after seeing the show the first time (a first for me).  Some obscure musicals are better off staying obscure.  Bare deserves a much wider audience, and I’m so glad Minneapolis Musical Theater unearthed this gem.  The story of the not-so-secret affair of two young men at a co-ed religious boarding school sounds like a cliche, I know, and oh does it flirt with well-trod territory and character types.  But the intelligent, respectful treatment of the place of faith in thinking people’s lives, and the depth and intensity of the connection between the two boys at the center of this storm really took my breath away.  The power of the performances of the four leads in particular – Dan Lundin, Derek Prestly, Devon Solorow and Alex Kotlarek – both vocally and emotionally, can’t be lauded enough.

The other nine, in alphabetical order…

[not quite busting the top ten, and it was hard to kick them out in favor of the above…

Ajax In Iraq – Frank Theatre
(Another Ivey evaluation assignment, so no public review posted at the time) A big concept – war – crossing both time and space, legend and reality, somehow contained in a black box theater space without ever seeming cramped.  A crack acting ensemble and team of designers under the always skilled direction of Wendy Knox brought a raw, intelligent, unflinching script to life and reminded me yet again of the scary and intense power live theater can wield when it’s at its best.

Murderess – Theatre Unbound
(And, another Ivey assignment with no public review posted)  Theatre Unbound has always been an artistic home for the great playwriting of Anne Bertram.  But though past productions were good, for whatever reason they were never quite as good for me as the scripts themselves.  After a number of near misses, Theatre Unbound got the combination of production elements just right with Bertram’s Murderess.  Seven monologues from women killers portrayed by seven different actresses under the guidance of seven different directors.  Could have been a muddled mess, but instead hangs together remarkably well.  In addition to another fine script from Bertram, it showcased particularly great work by actresses Laura Wiebers (a personal best) and Ellen Apel.]

The visiting production that blew my mind…

(I’m so excited that Mixed Blood is doing this locally next season.  I was wondering which theater company was going to nab it first.)

The production that bugged the hell out of me, but I couldn’t stop talking about it…

The most fun I had as an audience member last year…

Private Eyes – The Phoenix Theater Project
The review link covers the show itself, but here the fun offstage nearly rivaled the fun onstage.  When I was one of only three people to arrive to see the production that day, director/producer Matt Rein offered us a choice.  “We’re totally ready to do this show, even though the house is small.  It’s up to you.  We can set you up to come see another performance, or if you want to stay, the show goes on.”  On with the show it was.  It helped that the people on stage and in the house all knew each other.  Some lines even got slightly tweaked for the occasion.  Breaking the fourth wall, rather than apologizing to “all of you,” the actor said, “Forgive me for addressing the three of you directly.”  Afterward, we all hung out at the theater and had a drink, talking about the play and theater and life in general.  Just an all around great night.

The loss of Tom Poole in a hit and run accident last year was horrible.  The memorial celebration for Tom Poole was hilarious.  The theater community gathered around Tom’s family and not only offered humorous remembrances of Tom but also performed excerpts from the many smart and funny words Tom shared with us all over the years – from plays to Facebook updates.  It was a labor of love for all involved but Joseph Scrimshaw as master of ceremonies was at his very finest.  Joseph had just as much reason to cry and fall apart as the rest of us but he never let it show.  He kept the evening moving along at a spritely pace and found humor and graceful segues in even the most awkward of moments.  He made something almost impossible seem easy.  Not just a great artist, also a good man.  Just like the guy we were honoring that night.