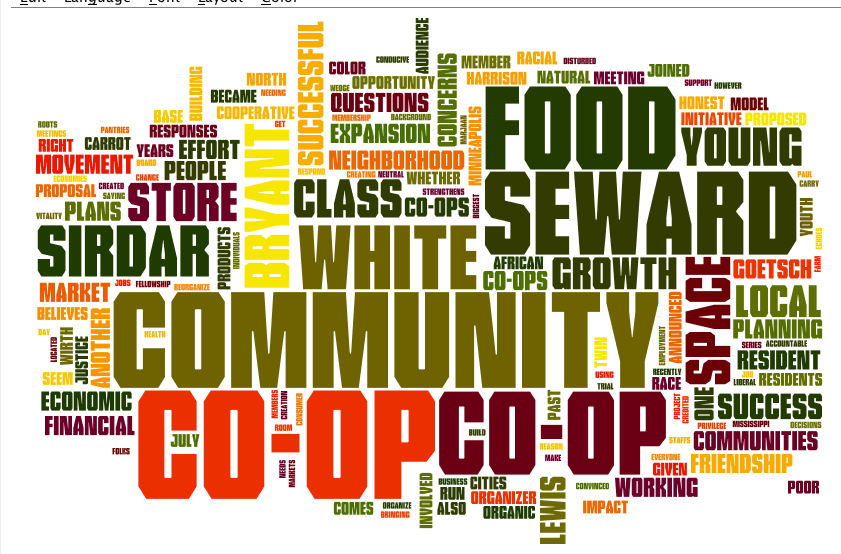 Environmental justice organizer, Anne Young, has been involved in the co-op movement since 1973. Young became membership coordinator at Seward Co-op in 1981. When she joined the co-op, it was in poor financial shape. Young is credited with leading the effort to reorganize Seward to achieve financial success. Young currently staffs the Harrison community’s effort to create the Wirth Co-op in north Minneapolis. Young believes that, “Co-ops are good for community.” Young, who has worked in a variety of capacities in the co-op movement, said that, “Co-ops can bring healthy food to the neighborhood but the biggest reason is that it is member owned. By that we can decide what products to carry, who is in charge of making decisions…then there is job creation and economic vitality that comes along to strengthens community.”

For the past 20 years, growth of the food co-operatives in the Twin Cities coincided with the robust growth of the natural health food market nationally driven by consumer interest in organic food. However, the growth in the market did not always translate into immediate success. The co-op leadership learned by trial and error how to run successful food business using the cooperative economic model. Following the growing markets food demand for organic food and learning how to operate effective businesses created the right combination for successful co-ops.

The co-op success became economic drivers for the communities where they were located bringing jobs for local residents and supporting local farm and food economies. The core of the co-op wars of the 1970s was whether co-ops should pursue growth in the natural food market or whether they should organize poor and working class communities. There didn’t seem to be any room for compromise. Now that local co-ops have achieved financial stability, attention can be given to sharing the success of the cooperative food model with low income and working class communities.

Not everyone is convinced that a co-op that comes from another community can facilitate change. “The narrative of support missed a lot” according to Bryant resident Marjaan Sirdar, “and it was not honest.” Sirdar said that “Seward should admit that they are building in Bryant because the land is cheap and not because we (Bryant) are a food desert.”

Sirdar, a Bryant resident for the past seven years, said “We cannot afford to be race neutral in this process of developing the co-op.” Working with homeless youth, Sirdar sees “the impact of racial disparities every day” in youth struggling to find employment and needing to use food pantries to feed themselves, Sirdar does not believe that a co-op is the right fit for the community. “Especially a co-op that does not understand racial equity,” said Sirdar. “The community has valid concerns, and there are those that want to shut down these conversations.”

One of the concerns about the Seward Co-op was the perception that the co-op would only serve white middle class people. Laura Goetsch, a local resident and a community organizer with At The Roots, described the proposed co-op as a “white space,” a space that is not conducive, in terms of products or practice, to the presence of people of color. Goetsch said, “Seward’s Co-op framework is white, liberal middle/upper class.” Therefore the store can only respond to the needs of its white customer base. Goetsch believes that to whatever degree the Seward store is successful in building in Bryant, it will also be “successful in creating another space that perpetuates systems of oppression.”

Sirdar echoes those concerns, saying, “If the co-op pops up in the Black and Latino community and hires mostly white folks, a segregated space in the community would be a slap in the face.”

The observation that Seward Co-op is a “white space” would seem true. During the July meetings, the majority of those individuals representing the Seward Co-op and the Carrot Initiative were white. Reflecting on the ownership base of Seward, Sirdar wonders if “even 10 percent of Seward members are people of color.”

An audience member during the July meeting, Robin Lewis, was “disturbed” by Sewards responses to questions posed by the audience. “I came out to the meeting because it’s my neighborhood and how the store will impact my community is important to me,” said Lewis. “The questions from the community were honest and sincere and there should have been more specific answers given” to issues of inclusion and gentrification. The vagueness of those responses led Lewis to explore opportunities to get involved in the co-op expansion project. Lewis recently joined the Carrot Initiative board to make sure that the proposed co-op store was held accountable to the community.