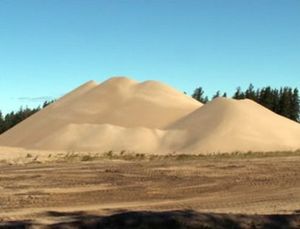 A citizens’ group in Wabasha has appealed the city’s recent decision to allow a Calgary-based company to set up a silica sand transport facility.

The group, Friends of Wabasha, filed the appeal against the project, citing environmental, economic and traffic concerns.

Last month, the City Council voted not to require Superior Sand Systems to complete an environmental review for the facility. The city’s planning board later approved the project’s conditional use permit for the facility along the Canadian Pacific tracks.

MPR reports that the City Council has 60 days to respond to the appeal and is likely to take it up at its February 5th meeting.

Here’s a copy of the appeal from the group:

Regulation of frac sand mining is anticipated to be an important issue in the coming session of the Minnesota legislature; the session starts next week.

An Alberta, Canada corporation established in 2008, Superior Sand Systems had begun playing hardball with the city council last year, and the council caved, despite citizen concerns about the project.

. . .Paul van Eijl, a lands acquisitions manager with Superior Sand, said the company is working with Wabasha’s planning board to address many of the residents’ concerns through the city’s standard permitting process. But he said the city lacked authority to order the environmental review, citing a federal law that prohibits states from regulating railroads.

Council member Catherine Gallenberger said ordering the review would have cost too much and risked a legal battle.

“How much are we willing to spend?” Gallenberger said. “And where is that money going to come from? Does that mean we have to raise the taxes again next year to the degree we raised them this year so we can pay for this possible fight that we may have? Or should we just continue on the course that we have set in our policies, which hopefully, maybe we’re going be wrong, but hopefully will protect us.”

Superior Sands has one frac sand mine across the river from Wabasha in Wisconsin, and company official D’Arcy Duquette told the Star Tribune of Minneapolis it plans to seek approval for two more mines at sites in that county. The Wabasha facility will employ 18 people at full production, not counting trucking jobs, said Duquette, a former Canadian Pacific executive.

Duquette also said the Wabasha facility will have enough capacity — 1.2 million tons a year — for Superior Sands to consider mining in Minnesota.

From the sounds of things, it appears that Wabasha’s citizens aren’t planning to go quietly on this issue.