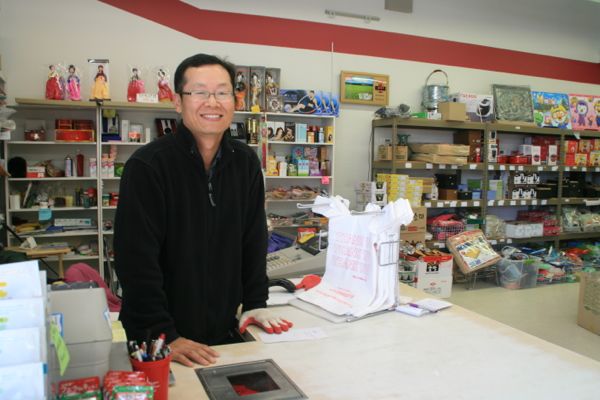 Owner Kyung Ahn welcomes customers from all over Asia and from the USA. (All photos by Stephanie Fox)

Like most Korean grocery stores I’ve visited, Kyung Ahn’s spotless grocery with the punster name, Seoul Foods, carries a wide variety of Korean and Japanese foodstuffs. The countries started sharing food traditions during the Japanese invasions of 1592-1598, and have been exchanging food ideas every since.

Korean food is not well known in the Twin Cities, so I asked the Korean woman who runs Anna’s Alteration on Cedar Avenue in Minneapolis where to find the best Korean and Japanese groceries. “Seoul Foods is the best one,” she told me. I headed to Fridley, and it was worth the drive.

The store’s biggest seller, according to Ahn, is the kim chi, the fermented (think pickled) vegetable that’s the national food of Korea.  The Kim Chi Field Museum in Seoul (yes, it’s that important) claims 187 historic and modern varieties and at Seoul Foods, you can find at least dozen to take home and taste. The most popular version is the Napa cabbage, which is often carried in mainstream supermarkets. Radish kim chi (in both the mild white and spicy red styles) and pungent scallion versions also are worth a try. 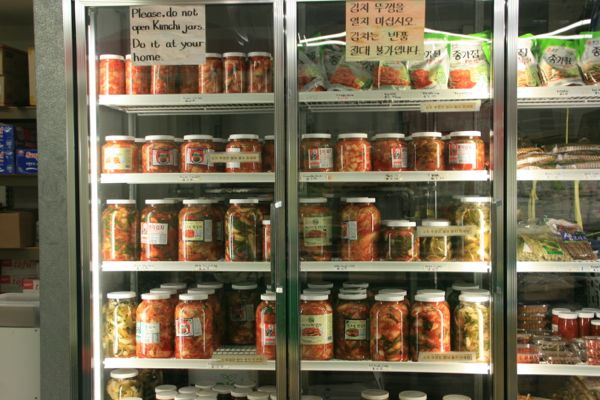 Various types of kim chi in sizes from a quart to a gallon. Note the warning: “Please do not open kim chi jars. Do it at your home.”

When Americans taste it their first time, said Ahn, they don’t like it. “They find it hot and stinky, but that soon changes. Soon, they love it and can’t live without it. Soon, they are buying gallon bottles.” 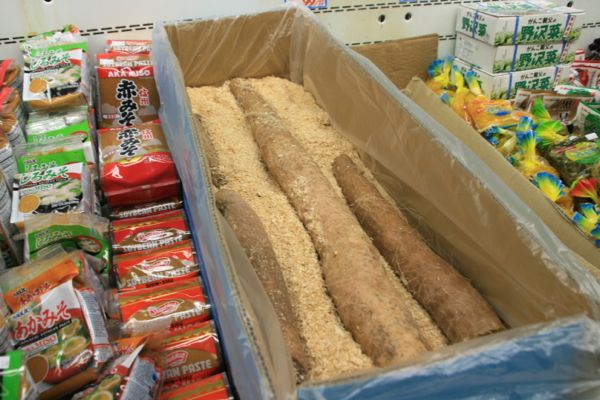 Ma, an Oriental style yam is healthy for you and may be an aphrodisiac.

Among the fresh vegetables is type of yam called Ma in Korean and Nagimo in Japanese. It’s considered a health food and has a reputation as an aphrodisiac. Shred, grate or cube this low-cal root and serve raw. Or, add it to make the Japanese Spare Rib and Nagaimo Soup. There is also a dried and powdered version to make a yam tea that Ahn claims is revitalizing. “Golfers in Korea – after they play nine holes, this is what they drink,” he says.

The store’s coolers hold a lot of heat-and-eat dinners like the pork and soybean stew or pork and vegetables with black bean paste. One, a Korean Cornish game hen soup, contains a whole hen in a stuffed with a little sweet rice in a ginseng-flavored broth. this is very good.

There are freezers filled with dumplings for steaming or frying, thinly sliced beef for dishes like bulgogi, a Korean classic, cases of tofu and miso. 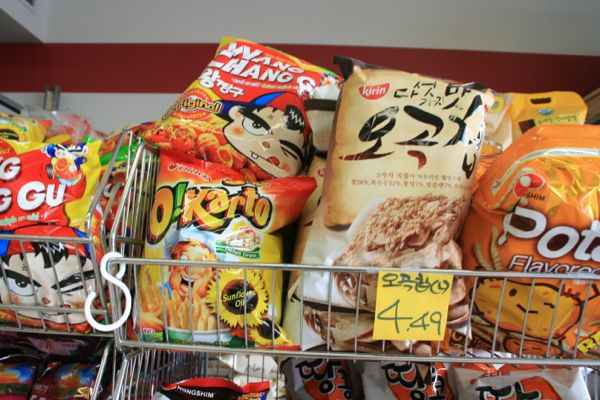 O!Krto is French-fry shaped and crunchy.  “Italian style potato chips are made from high quality potato and fit for everyone,” it says on the package and who am I not to believe them?

There are snack foods, too – Korean and Japanese versions of American style snack chips in bright packaging feature anime characters with lots of copy in English. Then, there’s the chocolate flavored Cheetos like crunchy snack – the best or both worlds. Or, try the sweet Korean Pancake mixes. A popular indulgence known in Korea as Hotteo, these high calorie griddlecakes are filled with brown sugar or sweet green tea powder.

Ahn worked as a techie for Target when he first arrived in Minnesota in 1977, but has been welcoming customers since he bought the store in 2005.  His patrons, he says, are about 35 percent Korean and 10 percent Japanese, with the rest originating from other parts of Asia or the United States. Many of his Americans clients shop there and learn Korean cooking after adopting children from Korea, looking for ways to keep their children connected to their country of birth.

Seoul Foods is at 1071 Moore Lake Dr. in Fridley, just off Highway 65 or off Central Ave. in the Moore Lake Commons Shipping Center. They are open Monday- Saturday from 10 a.m.- 9 p.m. and Sunday until 6 p.m.