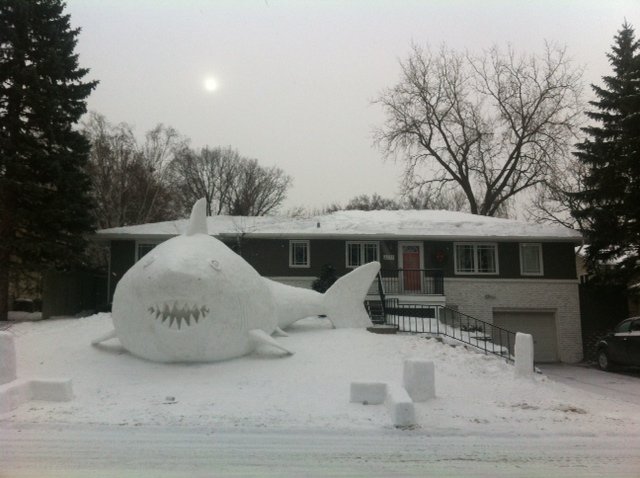 While I was driving around Fridley this afternoon, its still snowing and the temperature was minus 7 degree but that didn’t stop folks in Fridley to step out of their cars and take photos of a professionally sculpted shark that lies front of a house and the height of the shark is almost half of that house.

Some one in the neighborhood told me that the professional-sculpture was built by a teen age-boy and he did that last year too. I was thinking of catching up with that little young man for an interview but couldn’t find him as it seems he is gone to his school.

After returning home, I was talking about the shark-sculpture and one of my sister-in-laws said “I think we should build a Potala sculpture.”

“We probably could tell the plight of people inside Tibet through that Potala-sculpture.”

Potala palace is one of the “almost” seven-wonders of the world that lies on the roof of the world “Tibet”, and it was the palace of the Dalai Lama, the Tibetan spiritual leader, before his escape into exile.The Dalai Lama is still in exile in India since Chinese invasion of the Himalayan country in 1959 and in recent years, more than 120 Tibetans inside Tibet have set themselves on fire in protest against the Chinese government and calling for the return of the Dalai Lama from exile.

All of us sipping coffee at the dining table finally agreed to build a Potola palace sculpture next year and we are positive that the sculpure will bring more eyes to the attention of ongoing Tibetan self immolations than our monotony ritual protests in the downtowns.