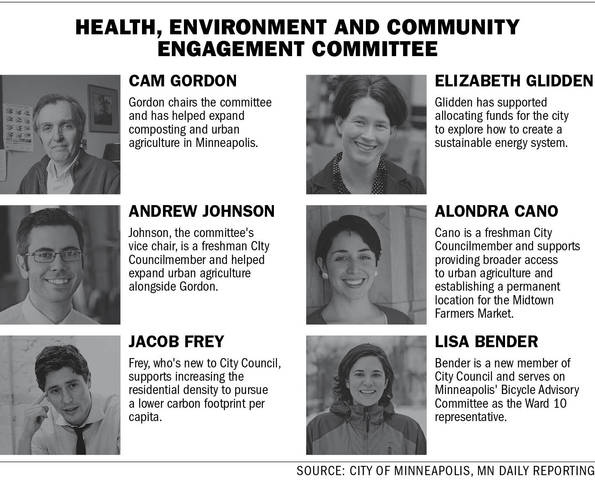 Ward 3 City Councilman Jacob Frey, who represents parts of the University of Minnesota area, also joined the committee with hopes to increase access to locally grown fruits and vegetables.

More than half of the freshman City Council members, showing interest in environmental causes, have joined the committee. But experts say these issues are sometimes more complicated than they appear and can take years to tackle.

Formed this month, the Health, Environment and Community Engagement Committee is chaired by Ward 2 City Councilman Cam Gordon, who said it was created to keep up with the needs of the city. Before, separate committees across the council handled these issues.

Gordon said the freshman members seem energetic and hardworking and have high hopes for improving Minneapolis.

“There’s definitely a hunger for a … community that is very connected to the environmental future of our world,” Cano said. “The younger generation of folks who are here both are more connected to that understanding and also more willing to do that work.”

Larry Jacobs, a political science professor at the Humphrey School of Public Affairs, said the City Council could experience “growing pains” with the turnover in membership, and the newcomers are “idealistic and untested.”

“I’m not anticipating an easy run,” he said.

Some City Council members who have joined the committee already have ideas for changes they’d like to make, but they may be heading into complex territory.

Frey said he supports increasing residential density as a way to lower each resident’s carbon footprint.

“It’s never quite as simple as it looks,” he said.

However, Lindsey said, compact cities could reduce carbon emissions because they often make it easier for residents to walk instead of drive.

Frey also said he will work with developers and neighborhood leaders in Ward 3 to ensure that new construction projects include sustainable elements like solar and wind power.

Cano has outlined goals as broad as promoting urban agriculture to engage a broad range of community members, and as specific as finding a permanent location for the Midtown Farmers Market.

Eating local food can minimize the energy it takes to produce and distribute it, Lindsey said, but won’t necessarily have that effect.

“If you have lots of people driving and making special trips to lots of different little organic markets, then there may not be reduced energy consumption,” he said.

Still, the newcomers are up for the challenge, Frey said.

“We’ve got a slew of new council members that are incredibly enthusiastic about the environment in which they live and making our city thrive as a general rule,” he said. “And sustainability is a huge part of that.”