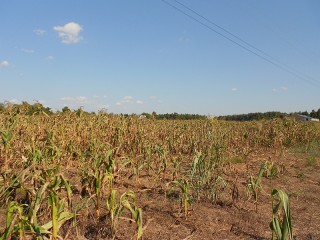 One of the many ironies of the U.S. Farm Bill debate over crop insurance and revenue “assurance” programs was a tacit bipartisan agreement not to say in public four words that summarized major drivers in creating the proposed programs. The U.S. drought, covering 80 percent of arable land and the worst since 1956, has pressured Congress to expand taxpayer subsidized crop insurance while refraining from uttering its cause: climate change. In 2011, crops insurers paid out a record $11 billion, according to the American Association of Crop Insurers’ manager David Graves.

Promoters of “revenue assurance” to counter price drops, which decimate farm income, were loath to mention “financial speculation.” (Earlier this year, Farm Bill writers took into account the possibility of planting binges and subsequent low prices, on the assumption that there would be a robust harvest to sell. They did not acknowledge the role excess financial speculation plays in price-setting).

Notwithstanding the commodity and financial market crimes and debacles of the past five years, market regulation, including enforcement of current law and the implementation of the “Dodd-Frank Wall Street Reform and Consumer Protection Act,” still faces well-financed opposition in Congress and on Wall Street.

Indeed, the Republican Party majority in the House of Representatives has proposed to freeze all regulation, i.e., to forbid any “significant regulatory action,” until unemployment drops to six percent (HR 4078). President Barack Obama has threatened to veto such “freezing” legislation. The Dead on Arrival bill is part of the Republican’s electoral campaign messaging about purportedly “job-killing regulations,” including those to implement Dodd-Frank.

But what should we say about the longer-term factors that will structure agricultural commodity prices long after the November 6 elections and the present U.S. drought have ended? In mid-June, IATP submitted a comment to the Commodity Futures Trading Commission (CFTC) about the reauthorization of the CFTC’s Agricultural Advisory Committee. The committee normally meets about short-term events that undermine confidence in the commodity markets, such as the MF Global or Peregrine Financial scandals.

IATP contends that the committee needed to discuss how longer-term events, such as those of climate change, would affect the ability of commodity users to manage price risks. According to Mark Hertsgaard’s Hot: Living through the Next Fifty Years on Earth, U.S. Department of Agriculture scientists expect the scorching summer of 1988, perhaps more severe than the current drought, to “become the norm over the next few decades.” Under such conditions and other longer-term climate trends, predicting the estimated physically deliverable supply of a commodity, which is a basis for setting position limits to prevent excessive speculation, will become very difficult.

In some ways, the current U.S. drought is a source of comfort to those who believe that commodity prices are set by market participants whose price bids and offers respond only to supply demand fundamentals. The “weather,” is an uncontrollable and somewhat unpredictable factor that affects agricultural supply and demand. Invocation of the “weather” and related factors, such as plant disease, has become the all-purpose explanation for current price levels and price volatility.

A recent study by two economists of the United Nations Conference on Trade and Development (UNCTAD) is an example of a topic for joint advisory committee discussion. They analyzed the huge increase in HFT trading of agricultural contracts, particularly since 2009. The authors analyzed a new HFT database to show how one-hour, five-minute, ten-second and one-second trading intervals moved prices in different commodities and equities uncorrelated by market fundamentals. The study reviews oil, corn, soybean, wheat, sugar and live cattle price data, as well as equity price trends, from 1997 to 2011. (The inclusion of commodity contracts with equities, bonds, and other financial instruments is justified as a diversification of investment portfolios to avoid risks associated with investment in any one asset class.)

Joint advisory committee meetings would enable the CFTC to better understand structural changes to commodity price movements, particularly as they were enabled by trading practices and technologies that acted too quickly to respond to market fundamentals. If the advisory committees continue to limit their discussions to the short-term events of this summer’s drought or market crimes, the CFTC will not be advised about longer-term market malfunctions.

The CFTC should be advised of how financial “innovations” and climate change are affecting agricultural price discovery, price-risk management and the physically deliverable supply of commodities. Absent such advice, the CFTC could become the regulatory analogue of an endangered species, unable to adapt to the relentless churning and regulatory evasion of financial “innovations.”

Neither greater tax-payer subsidized crop insurance, nor tax-payer supplied “revenue assurance,” nor improved CFTC regulation of price risk–management can substitute for legislation and a financial commitment that responds adequately, and by 2020, to what Bill McKibben calls the “Terrifying New Math” of climate change. An even harsher climate likely will makes agriculture and other businesses commercially uninsurable, forcing a massive effort to drastically reduce greenhouse gases and adapt to climate change. In the meantime, a more comprehensively advised CFTC can prepare to manage the price risks of sustainable agriculture and renewable forms of energy that will be required in the not-to-distant future.