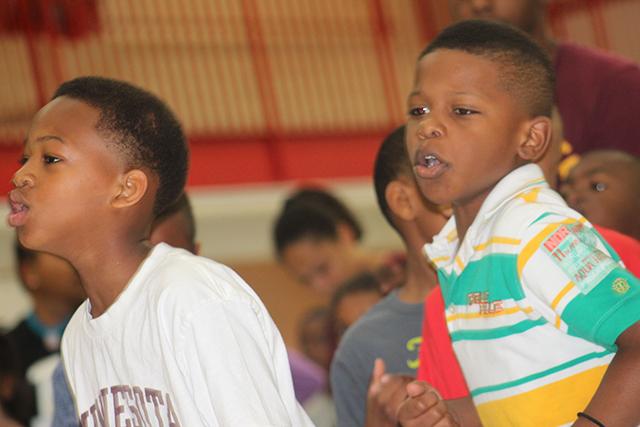 Wearing a white coat over a green dress and with her dark hair sweeping her shoulders, the Rev. Darcel Hill stood tall last Friday before a sea of enthusiastic children, dancing to inspirational songs in the gymnasium of Capitol Hill Gifted and Talented Magnet School in St. Paul.

This is how each weekday of the summer begins for 361 elementary-age students of St. Paul Area Council of Churches and St. Paul Promise Neighborhood Children’s Defense Fund Freedom School. The six-week SPACC/SPPN CDF Freedom School program helps minority students, primarily African-Americans, remain connected with education to thwart the learning gap students may experience when school is not in session.

“Music is really important because it has a way of energizing your spirit, soul and body,” said Hill, director of SPACC/SPPN CDF Freedom School. “Especially, the music we use with the positive messages to create a positive atmosphere that is conducive to learning and relating well with others.”

Integrated into the curriculum are children’s books of all genres including poetry, fiction non-fiction and autobiography that are written primarily for children of color.

“When they look at these books, they see authentic images of themselves with people who face the same circumstances and overcame the disparities in their lives,” Hill said. “For instance, you can read stories about Martin Luther King, when he was a child, how he grew up, and the things that he did as a child that prepared him for his role in life.”

The book list and activities offered to CDF Freedom School scholars reflect on these themes: I Can Make a Difference in: My Self, My Family, My Community, My Country, and My World with Hope, Education and Action.

‘I love this program’

Jeremiah Atkins, a Freedom School student, said his favorite part of the program is reading “Humpty Dumpty,” a children’s book about an egg whose mission is to get the best seat during King Moe’s birthday party.

“I like to read,” 8-year-old Jeremiah said. “Humpty Dumpty is smart and funny.” Remembering the storyline of the book, Jeremiah added: “Humpty Dumpty has 11 siblings, but he’s the best — he makes friends and he cares about them.”

Jeremiah, too, makes friends in program. Among them is Kendrich Washington, who also likes to read.

“Sometimes it’s easy; sometimes it’s hard,” Kendrich, 9, said of the reading activities in the program. “But I know how to read.”

He added: “I love this program,” because he gets to read books he can relate to and learns about the tumultuous history of African-Americans who lived during slavery and the Jim Crow era. 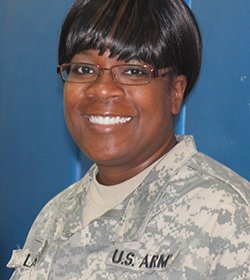 “Normally in school, our children might not get as much of a multicultural curriculum,” Hill said. “But here in Freedom School, they do. And they’re enthused about it; they’re interested in more reading and persevering through some of the disparities and academics.”

And parents say they feel the same way.

Contrina Lamb, a Minnesota Army National Guard member and a mother of two, said she’s been taking advantage of the opportunity for nearly 10 years. Her son Lorenzo, 14, graduated from the program a couple of years ago, and her 8-year-old daughter, Emaya, is enrolled in the program.

“It’s a wonderful program,” said Lamb. “I love it. They really teach well. They make the kids a lot more outgoing than what they normally are used to.”

Lamb, who was born and raised in St. Paul and has been serving in the Army for 22 years, added: “As we all talk about how the kids like to get lazy in the summer, the program keeps them socially busy.”

“Our superintendent wanted us to serve more children,” Hill said. “The two Freedom Schools were located in the same building and offered similar programs.”

Hill added: “It was a spin off, basically. A lot of the leadership and people who worked there were our former scholars and our former leaders.” Even Hill served the St. Paul Promise Neighborhood’s Freedom School as a consultant.

CDF Freedom Schools serve in 84 cities and 29 states, teaching more than 9,600 children, according to a 2012 report by the Children’s Defense Fund.

“Since 1995, over 80,000 children and families have been touched by the CDF Freedom Schools program experience,” the website states. “More than 9,000 college students, and 2,000 adult site coordinators and project directors have been trained to deliver this empowering model.” 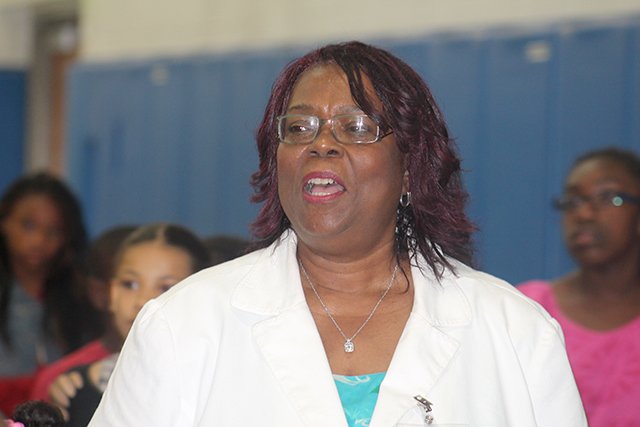 The SPACC/SPPN CDF Freedom School has 12 college-age interns, many of whom are former Freedom School scholars. They mentor the children in reading and help with other activities in the program.

There are eight CDF Freedom School sites in the Twin Cities — two in St. Paul and six in Minneapolis.

The Center for Adolescent Literacies at the University of North Carolina Charlotte conducted a study on the impact CDF Freedom Schools had on participants in over a dozen programs in Charlotte. The study, which was released in 2010, found that 90 percent of the program participants improved or maintained the ability to read independently.

The Kansas City report added: “These data suggest that Kansas City CDF Freedom Schools scholars not only increase their skills during the summer, but enter school in the fall more ready to continue learning.”

Both reports found an achievement gap between CDF Freedom School students and other students, who didn’t participate in the program.

While Hill is well aware of the numerous reports underlining how CDF Freedom Schools have contributed to the academic betterment of thousands of children throughout the country, she drew on her own findings and personal experience when describing the program’s impact on the St. Paul students.