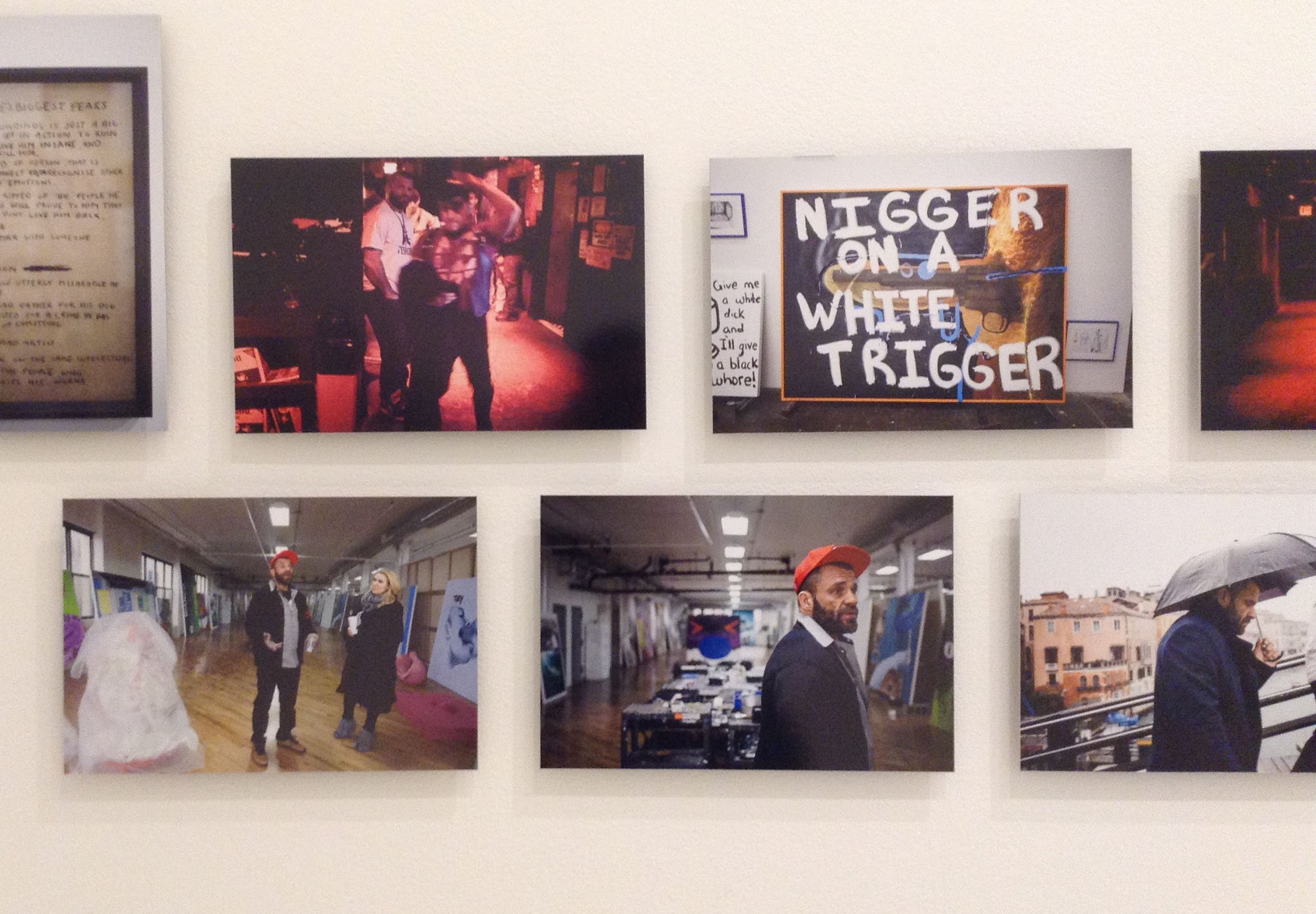 A few photos from Melgaard's contribution to 9 Artists.

I’ve spent the past couple of weeks plotting my strategy to bring attention to artist Bjarne Melgaard’s use of blatant racism in his work, but it seems he has done my work for me.

Melgaard, the artist responsible for the recent “women of color as chairs” scandal that surfaced last week, currently has work in an exhibition called “9 Artists” at the nationally-recognized Walker Art Center in Minneapolis, MN. The show aims to explore the changing role of the artist in the global community. Melgaard’s contribution to the show includes a series of photos containing multiple uses of racially insensitive slurs, such as a photo of a painting with the text, “N*GGER ON A WHITE TRIGGER.” Artist Dahn Vo also contributed his piece “I M U U R 2” to the show, a work that displays various knick knacks, including a large collection of “Black Americana”: mammy and cook imagery and figurines of black children eating watermelon.

As a gallery attendant at the Walker Art Center, I’m all for freedom of expression. You wanna splatter paint on a canvas and you can get somebody to buy that shit? Do you. However, there’s a fine line between claiming freedom of expression and producing truly oppressive works for mere shock value. Removing oppressive language and imagery from its historical and cultural context and placing them in a predominantly white-populated space with little to no indication of an implied conversation or possible moral takeaway is obviously problematic.

I took my 12-year-old brother to “9 Artists” and made a point to explain to him what the “Black Americana” pieces were, their intended societal use and even went into a little bit of the historical context of his own black body in the US. However, contrary to what the Walker might like to think, not everyone that steps into their galleries is socially, culturally or even historically aware of the oppression that continues to be inflicted by stereotypes that stem from “Black Americana.” The same can be said of the seemingly general ignorance of the historical power dynamic ingrained in the action of a white person using any variant of the n-word: a situation that seemed to play itself out one Sunday at the Walker.

I was guarding the gallery, watching a white man and his teenage daughter view Melgaard’s photos. They took pictures of the photos, then they stopped in front of the “N*GGER ON A WHITE TRIGGER” photo, talked and laughed at the photo, looked me in the eye and moved on. I was infuriated. I wanted to confront them and ask them what the hell was so funny, but it would have been inappropriate for me as a guard in a museum to interrogate a visitor.

However, even in my anger, I did struggle with trying to figure out if I was being overly sensitive, an accusation that gets thrown around a lot when people of color object to a racist joke or comment. I realized that people of color have been conditioned to endure oppression in silence. My attempt to question my feelings over this piece is evidence of that. The accusation of me being overly sensitive, only informs me that the accuser is more invested in the status quo than in acknowledging injustice.

This incident occurred at a point in my employment at the Walker during which I’ve been processing my feelings about being a person of color in a predominantly white-populated institution. The Walker’s main demographic seems to be middle-aged upper-middle class white people. On any given day, I might see one black man viewing the galleries, if that. An overwhelming majority of the staff is white. I am one of few people of color on an extensive guard staff at the Walker, and I’ve yet to see people of color in higher up positions. Sometimes even exhibitions are void of artists of color, like “Painter Painter”, a recent exhibition curated by the same person who curated “9 Artists”. The fact that I, an African American woman, often times can’t see myself reflected in the Walker has made me question the museum’s intent with their marketing, recruitment and curation efforts.

Last fall, a group of Minneapolis artists and organizers penned the conversation-stimulating piece, “Open Letter to the Walker Art Center”, which brought the Walker’s outreach efforts (or lack thereof) to the African American community under fire in regards to a screening and conversation about Steve McQueen’s 12 Years a Slave. They proposed that people of color aren’t staying away from the Walker because it’s too expensive, and they aren’t staying away because they’re not interested in art. So it must be something else.

For me, that “something else” is the lack of representation and it lies in fact that at the last Free First Saturday event the Walker showcased North African music apparently played by a group of white musicians. It lies in the fact that, “well, this is Minnesota”, is such a common response when the lack of diversity in Minneapolis art institutions is brought up in conversation even though whole communities of color can be found less than 5 miles away from the Walker.