This time of year kids in the Twin Cities typically celebrate the end of school with a field trip to Valley Fair amusement park or the Minnesota Zoo. But for the past two years many American Indian students, teachers, and community members have forgone those outings in favor of the Mde Maka Ska Canoe Nations Gathering, an event that combines traditional teachings about the waters with hands-on canoe experiences.

The gathering, according to its organizers, is a meant to seed the resurgence of Native canoe culture in a region with a rich history of water-based peoples. “This is a way to reattach ourselves to our culture,” says LeMoine LaPointe, Director of Healthy Nations at the Minneapolis American Indian Center, coordinator of this year’s gathering. “If we never make these health giving connections, we may never again associate ourselves with those elements, such as water, which are essential to our culture.”

Mde Maka Ska is Dakota for White Earth Lake, the original name of Lake Calhoun, one of the lakes in the Minneapolis chain. Until the 1830s Mde Maka Ska was home to the village of the Dakota chief Cloudman.

Syd Beane, a direct descendant of Chief Cloudman, welcomed some 600 participants May 28 during the gathering’s morning welcoming ceremony. “We are standing on the site of the first settlement in what would become Minneapolis. This is also the site of the first school. Your presence here marks an important day in the life of this special place.”

“We sent kids to this event from all different backgrounds: Hmong, Somali, Mexican, White, Native American,” Loewenson says. “These students learned that this lake has more than one name, and that there is more than one version of history. They learned that there was an entire civilization that lived around these lakes, where this city stands today, that was here way before the first white man ever set foot in the area. This is an opportunity for a whole new set of insights about what this land means to the Native American Community. This gives our kids a new base of knowledge on information they don’t study at school.”

This year’s gathering was held in honor of Yvonne Ortiz, a Ho Chunk community leader who passed away last year at age 29 after battling cancer. Ortiz left behind twin babies. Her parents, Felicia and Colin Wesaw, were presented with a photograph of their daughter taken while she paddled Wakpa Mni Sota (Minnesota River) in 2008, after which the assembled participants stood in line to shake their hands in a traditional gesture of support. 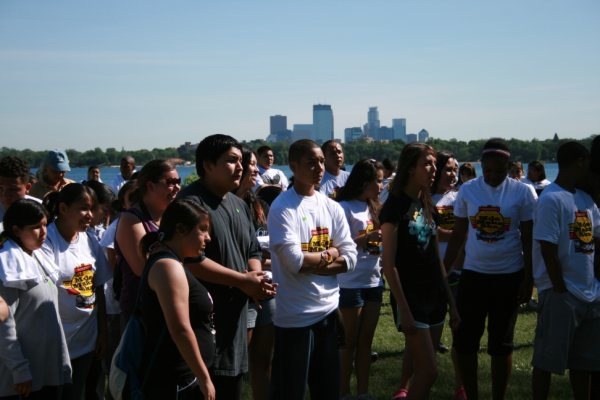 Canoe resurgence efforts in Minnesota are not occurring in vacuum, but are part of a larger movement happening upon Native homelands in places like Maine, Michigan, and the Pacific Northwest. Plans for expanding the Mde Maka Ska gathering include extending invitations to nations such as the Ottawa, Pottawatomie, Maliseet, Passamaquoddy, and Penobscot who will be asked to attend with their birch bark canoes.

“All of these indigenous nations are or were originally located within the birch tree belt that extends from the Eastern Seaboard all the way through Minnesota and to the West Coast,” LaPointe says. “We want to start creating relationships between these nations, alliances that never existed in the past, but could enrich our lives and create a better future for our people.”

LaPointe says it’s vital to the survival of canoe nations that they return to the lakes and rivers paddled by their forefathers. “We’re facing social and physical illness because we’ve adopted a way of life that does not belong to us. Our ancestors maintained excellent health in this region by keeping a strong connection to the waterways. We have to return to the waterways. We have to trust that our ancestors left us a blueprint for future generations to have good health.”