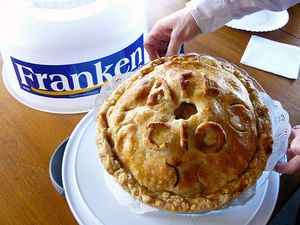 With the debt crisis bill passed, Minnesota’s congressional delegation is out on recess–and Al Franken is using the time to visit Greater Minnesota.

It’s no secret the Frankens are pie lovers, so Bluestem isn’t surprised to read about this stop in yesterday’s Mankato Free Press article, Franken continues trip through Mankato area:

The Farmfest stop is a traditional one for Minnesota’s elected officials, and the famous pie at Lyle’s explains the Winthrop stop.

Winthrop is just down Highway 15 from Bluestem’s national headquarters in Hutchinson.

It’s too bad my state representative Ron Shimanski couldn’t enjoy some pie with Al at the restaurant just outside Minnesota House District 18A, but the Minnesota Independent reports that the Silver Lake apple grower was headed far farther south.

No wonder constituents like Gus Ziemer send letters with headlines like Party politics caused lawmakers to stray from their duty to the Hutchinson Leader. Heck of a party.

Franken’s progress across the prairie demonstrates there’s plenty to do in sunny Greater Minnesota and that Al talks fluent Minnesotan. The Marshall Independent reports in Franken talks agriculture at Farmfest:

With a debt ceiling deal reached in Washington, national legislators are coming back to Minnesota. U.S. Sen. Al Franken was present at Farmfest on Wednesday, speaking at the main forum tent and meeting with members of the public. However, questions from audience members at the forum tended to center more around topics like ethanol subsidies and the next Farm Bill.

Franken gave an update on his involvement with agriculture-related issues in Congress. Agriculture is a key part of Minnesota’s economy and traditions, Franken said. “I know that in representing Minnesota, a large part of my job is representing you,” he told audience members. . . .

The rest of the article is a fascinating read about Franken’s fairly technical responses to the questions–but the discourse is pretty familiar stuff out here on the prairie. That gal in the bib-overalls may not have an Ivy League degree like the junior senator, but raise a point about federal farm policy, impossibly complex, and she’ll sound like the expert she is. And has to have been to stay in an brutal business.

Franken fits in pretty well with the farmers.

His remarks at the farmshow parallel a column in the ECM chain, Sen. Franken fights for future of Minnesota farmers, which touches on renewable energy and railroad issues. Go check it out.

. . .Dressed in khaki pants, a dark collared shirt and cowboy boots, Franken fit right in during his Wednesday afternoon radio interview with Lynn Ketelsen of the Linder Farm Market.

The Democratic senator, back in Minnesota while Congress is in recess for a month, said he was not pleased with how the negotiations went to keep the country from defaulting on its obligations. . . .

In addition to the radio interview in front of an audience under the Forum Tent at Farmfest, Franken spoke to the crowd there for about 15 minutes about various issues facing Minnesota farmers, including the 2012 Farm Bill that Franken said he hopes is actually completed in 2012.

“It seems an emphasis is on a safety net program to make sure we keep farmers farming,” Franken said.

As a member of the Senate Committee on Energy and Natural Resources, Franken said he is working on legislation to capitalize on wind energy and give small farms and cooperatives the opportunity to own wind.

Franken also spent time Wednesday at the University of Minnesota tent at Farmfest and meeting his constituents on the grounds of the annual show. . . . 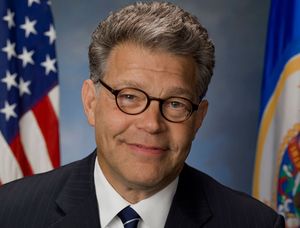 The focus shifted from ag to health care for the New Ulm stop, the Journal reports in Franken talks health care, debt ceiling:

Sen. Al Franken stopped by New Ulm on Wednesday for an update on the status of the New Ulm Medical Center’s (NUMC) Heart of New Ulm program.

The main highlight was a Center of Health Care Innovation at Allina study showing a drop in New Ulm heart attacks and the HeartBeat Connections program that provides health coaching. . . .

. . .Franken said after the meeting that he thought Heart of New Ulm was overall moving in the right direction.

“It’s unrealistic to for people to expect an incredible transformation this soon,” said Franken, “But, as pointed out, it’s doing a good job of bucking obesity trends nationally and in Minnesota.”

Franken said there needs to be a national push to approach health care like the Heart of New Ulm, which emphasized keeping people healthy as opposed to just treating illness.

Though Franken established himself first as a comedian, it’s clear from the coverage that he’s growing comfortable in his relatively new senatorial skin, at ease with policy and the wide range of people on the prairie.  Doggone it, we like him.