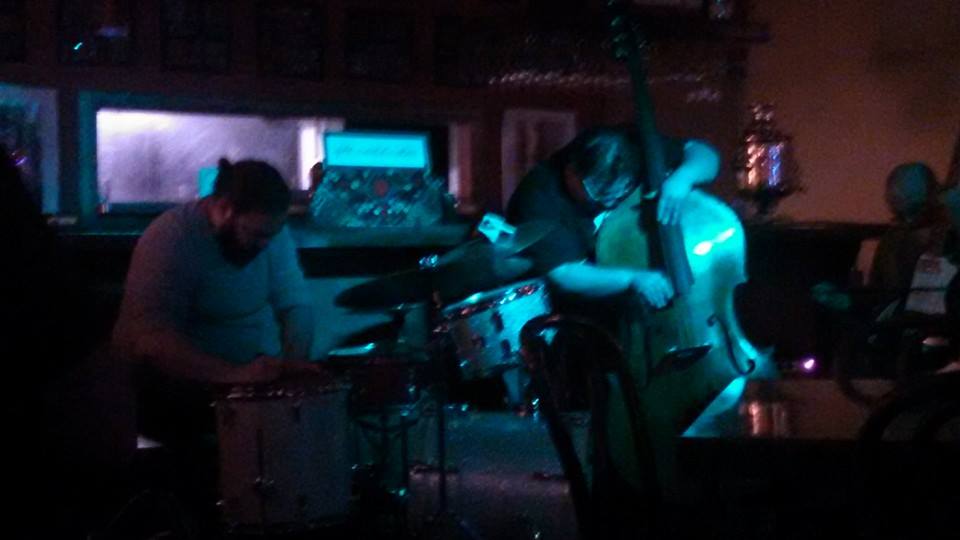 The Khyber Pass Café hosts “adventurous improvised” music every Thursday at 9:00. Last Thursday featured Adam Linz, and Paul Metzger and JT Bates playing Free Jazz, which I overheard Linz describe as music revolving around jazz. I liked the description of the music revolving around something rather than being something direct; the musicians seem to connect in the same way. They revolve their music around each other rather than directly playing together.

They also play around their instruments in innovative ways. Metzger played the guitar – sometimes times in a traditional way, sometimes with a bow, like a mini-upright bass. Linz plays the upright bass with a relaxed intensity. Bates plays the drums with drumsticks, chains, elbows – you name it. With all three it’s interesting to hear the sounds and music that’s created. It feels as much like a story as music because you don’t know how it will  end until the end  comes.

Although I think the location feeds into the idea of the story as well. The Khyber Pass has an exotic feel with a Afghani flavor in the decoration and motif. Best of all it is conveniently located in my zip code. A zip code where not a lot of music generally happens. For people in the areas (Mac Groveland in St Paul), Thursday nights at the Khyber Pass are a good time to get out. The show starts after 9:00 and usually ends between 11:00 and midnight. Not bad for a school night.