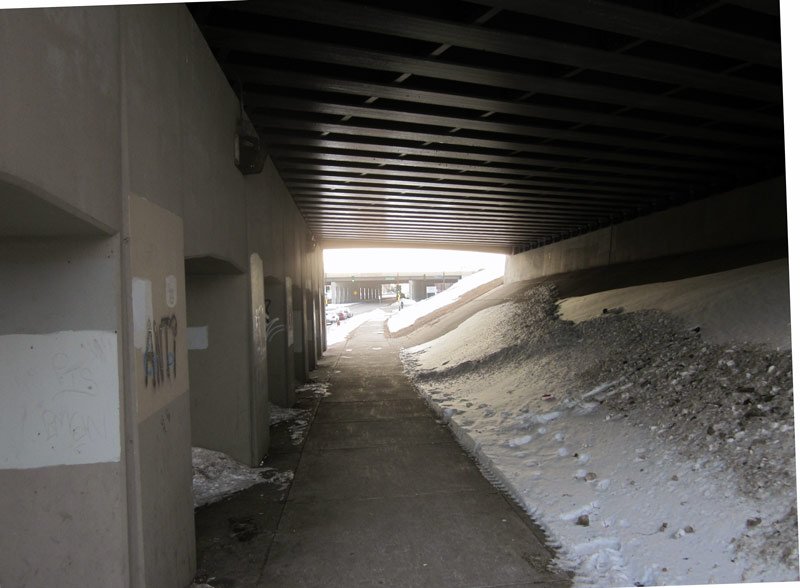 Franklin Avenue coming out of the Hiawatha freeway overpass. Photo by Bill Lindeke. 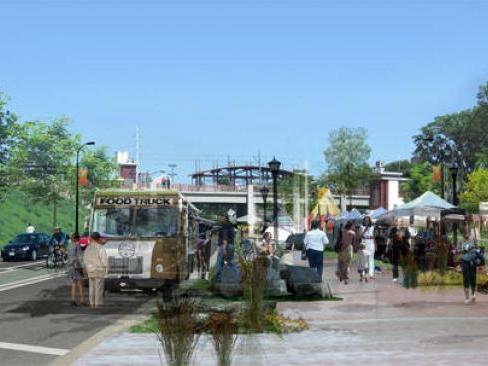 Franklin Avenue was once the border of Minneapolis, marking the edge of the city. Before that it was home to the Dakota people, and since the 1950’s post-“relocation era”, it is the site of the Little Earth community, the country’s only Indian-preference affordable housing site. But Franklin Avenue, which is controlled by Hennepin County, is also one of the most danerously designed streets in the city, home to a disproportionate amount of bicycle and pedestrian accidents. In particular, the corner of Franklin, Riverside, and Hiawatha, around the light rail station, has long been a dark, unpleasant place for people to walk and divded communities around.

Transforming Franklin from a dangerous eyesore into a welcoming home for the surrounding Native community is one of the top priorities for Andy Hestness, vice president of the Native American Community Development Institute (NACDI), which runs the All My Relations gallery on Franklin Avenue and works as an intermediary for the Twin Cities Native Amerian people. We caught up with him last week to talk about how Native American’s are starting to challenge and transform how sideawlks, buses, and bikes work in and around Franklin Avenue, Minneapolis’ most neglected busy street.

Daily Planet: Tell me about NACDI? What does your group do?

Andy Hestness: The NCDI institute is a young organization. We were founded in 2007 and the goal of the organization is to engage the Native community and find a vision for a prosperous community. 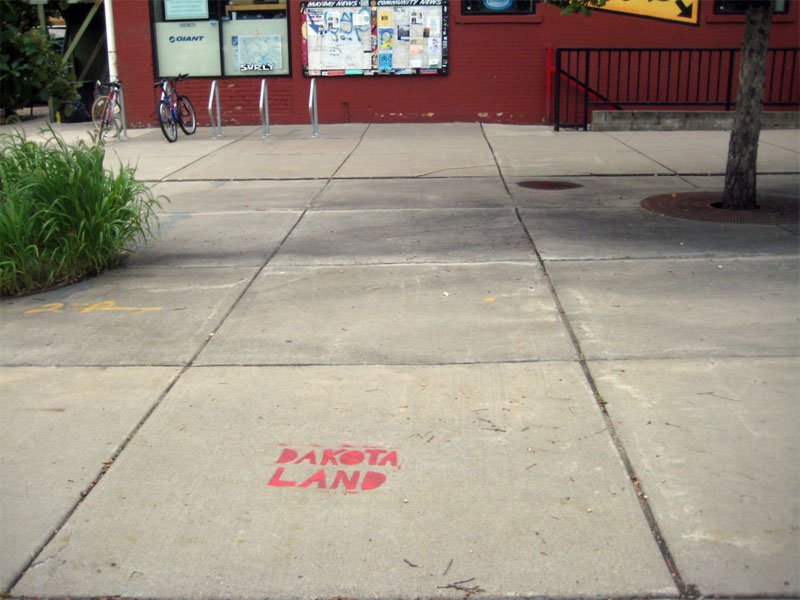 TCDP: What is that vision?

Andy Hestness: Prosperous people, native language and culture that are really connected and seeded in society. And for a physical place in Minneapolis that can be an identifiable home for the native communities that have lived in the Twin Cities since the relocation era, but also throughout time, because all this land was home to native people.

TCDP: I remember seeing once a graffiti on the sidewalk in Cedar-Riverside that simply said “Dakota land.”

Andy Hestness: It’s a nice little reminder. There’s a federal law that bans the Dakota from being in their own homeland from the 1862 war. There’s  loaded history everywhere. It’s important to remember that the cities of Minneapolis and Saint Paul exist in what was inhabited land. It was a place that people lived, and the environment we see now is a product of it.

TCDP:  I heard that along Franklin Avenue in Minneapolis is the only urban indian reservation in the country.

Andy Hestness: It’s technically not a reservation. Little Earth housing, in particular, is a unique community that’s the only Section 8 housing in an urban area with Indian preference.  So it’s kind of like reservation land, but its not.

That said, Franklin Avenue in South Minneapolis has been a really important gathering point for native communities since the Federal relocation started. And since the 1950s or so, we’ve had native folks leaving the reservation and coming into the community in greater numbers… 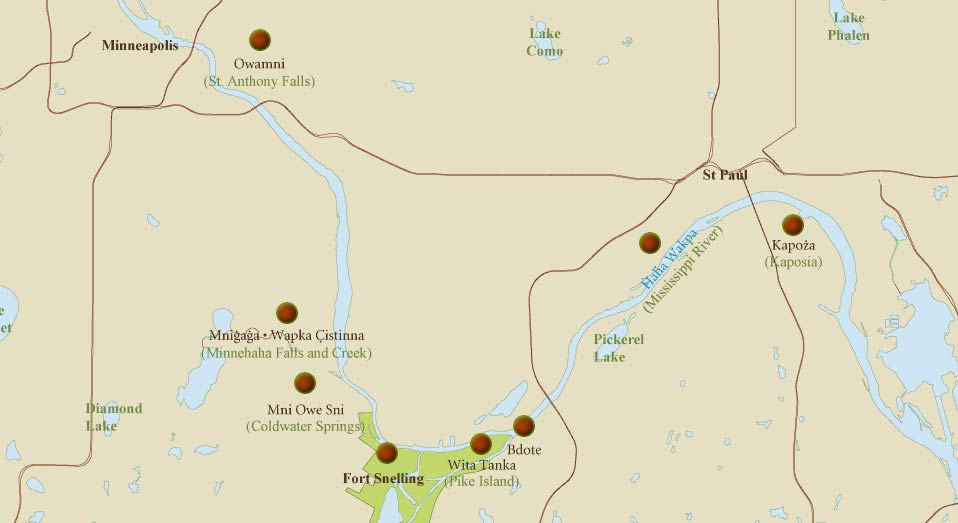 Andy Hestness: The community that really got established in South Minneapolis has a dimension of activism with the American Indian Movement (AIM) having its origins on Franklin, and so now we have seen activism turning into good strong buildings. The community created its own health system, its own education institutions, and own community centers, because really the outside world wasn’t creating these things for the native community. it felt it was important to create them in urban areas, so people left their home communities and came into the cities.

When NACDI was founded in 2007 there were lots of native nonprofits, but not necessarily a comprehensive vision within the community. There was no blueprint that showed what the physical environment of Franklin, what people desired for this area to look like.

So we are in a transition, transforming Franklin Avenue from a social service corridor to a cultural corridor with native culture, language, institutions, housing, and jobs… All of those things were really taking root as part of a process of transition from the infrastructure and institutions that are there now.  And the dimensions of changing the physical infrastructure have to include the transportation infrastructure. There’s a strong acknowledgment that Franklin doesn’t feel safe to walk on.

TCDP: But for part of Franklin, there have been some really great changes in the last ten years. I’m thinking about the bike lanes being striped, or the traffic calming and sidewalk improvements for the center part of the Avenue. That seems to have improved things. 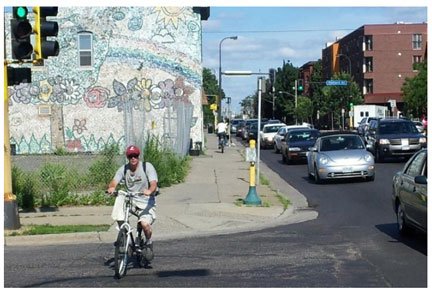 Andy Hestness: There are pockets of businesses here and there but, Franklin doesn’t have continuous feel of a business district that people desire. There’s a strong interest in bicycling infrastructure which was something that surprised us, but people really wanted to see how the bike network connected to Franklin Avenue, both across and connections to other parts of the city integrated into the transportation network that was developing.

TCDP: What about the bus? In my experience, Franklin isn’t that well served  by East-West transit. The #2 bus line is notoriously slow.

Andy Hestness: A lot of folks take the bus, and so we’re asking how does the bus system become more of a cohesive whole?

The route of the #2 bus does this strange zig-zag thing through the University of Minnesota campus. The question is, How does native community with new transportation options that have come online – and with the Green Line extension — how does the community get connected to those opportunities?

For that reason, NACDI has become involved in the SWLRT planning process to advocate for a Franklin Avenue bus connection, so that folks in Phillips would have direct connection to that line and the jobs that were talked about in the southern suburbs.

Basically, we’re figuring out how the community can be a part of an interconnected transportation system. A lot of folks walk in Phillips, and the walking infrastructure is not good. The LRT station area has been a very unappealing environment for a long time. You have the streetscape project that happened in Central Franklin, around the area from Bloomington to Chicago. But the stretch west of that is not good…

TCDP: When I’ve talked to people at the city or at the Minneapolis Bicycle Coalition, they’ve told me that a big part of the problem is working with Hennepin County, who control how the street is designed. Have you had any success dealing with the county?

Andy Hestness: We looked at the opportunities on Franklin a couple years ago when the non-motorized transportation pilot project (NTP) funding was around, and Transit for Liveable Communities (TLC) was managing that, rather than the other government unites. We participated heavily in the Franklin Avenue vision study that they did, and that included a lot of participation from the county, so we were dragging them along a little bit. there’s been a sense, and i’ve herd it from city planners and county planners, that Franklin is a reliever for 94, and that we can’t reduce the car capacity on the street. But that doesn’t line up with the way that anyone imagines the street being used, the vision for Franklin Ave that’s a commercial corridor, and what the main street of the community would look like.

We’ve worked with the county on the planning studies, and are starting to do work around the LRT station on pedestrian and bike improvements, and there we have a good partnership and relationship with the transportation planners at the county. Further west of Chicago, it’s going to take some time. People are still getting comfortable with the idea of changing the lane configuration and adding bike lanes. We’re building a relationship and making the case, and the city has helped by revealing all the pedestrian and bike crash data for Franklin. 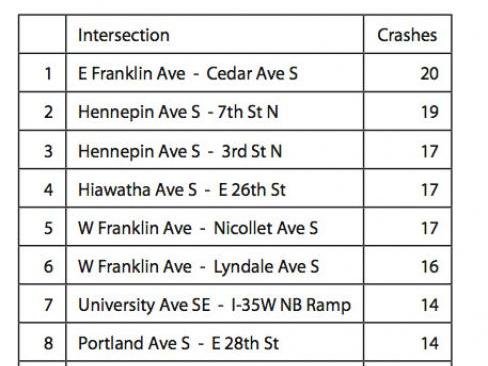 [Right: Franklin Avenue is the #1

spot for bicycle crashes in Minneapolis. Data from 2013.]

Andy Hestness: There’s no debate that Franklin is a dangerous street and more. Know its dangerous, and the Hennpin County Bike Plan has finally acknowledged Franklin Avenue as a corridor in their update.

But we don’t know what the timing is, and not every bike facility can be a bike boulevard on a low traffic residential street. Some of these major streets are going to need to be bike accessible, particularly at pinch points… Franklin is the only place to cross some of these major barriers like the interstate.

Another project we’ve been working on for a couple years is the market. Sheila Regan did a piece on our work around the Franklin LRT station, about how we received a grant from Artplace to re-design the median of Franklin Avenue underneath the LRT station and build pedestrian infrastructure that will support a marketplace for local artists. It would also create a new pedestrian circulation system that would address a relatively major issue with bus transfers on Franklin at the bottom of the elevator stair towers.

The problem is that there are three different bus lines that have stops at the Franklin LRT station, and the 22 is just another block away. People will often get off the light rail and come down the stirs, but there’s no pedestrian crossing. So people just run across Franklin, underneath bridge, in the dark, across four lanes of traffic, and it’s very dangerous. If we can create a pedestrian space in the middle, and work with the county as part of the project they’re planning around the Cedar-Franklin-Minnehaha intersection, we’d love to add a crossing there to make bus transfers there. It’s an important bus-to-bus connection point.

TCDP: I remember reading about that, and was amazed because the area under the Hiawatha overpass is so depressing and unpleasant as it is today. So where is the project at right now?

Andy Hestness: Well, there was a couple years of construction work, but the hard construction as finished last fall. We have some landscping we’ll complete this spring, and are working to get the public art processes approved by the Minneapolis Arts Commission, and installed this summer to add elements to the plaza. And then hopefully later in the summer, we’ll launch the market opportunities.